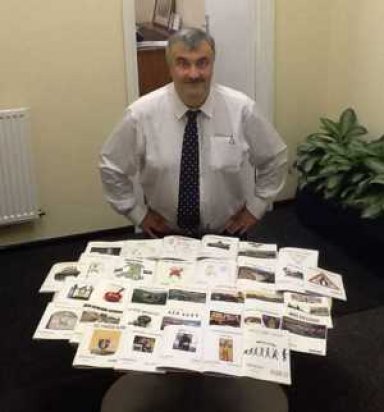 The basic premise is a one off special television hour and a half mini- film - as a homage to the legendary BBC programme ' Grand Slam'.It is a story to reflect the changing face of the Welsh Valleys and how cosmopolitan they have become and also how the sport of Rugby Union - the National Sport of Wales - just ahead of beer drinking- has changed since the 1970s some 45 years ago. It is initially set in Glebeland Street Merthyr Tydfil , with the five main characters being a French Welshman ( Cafe Owner) , English Welshman ( Estate Agent) Irish Welshman (Newspaper Reporter), an Italian Welshman ( Chip Shop owner) and a Scottish Welshman (Publican) encompassing the Six Nations so involved in the tournament.

The location is already there with all five establishments in place- albeit cosmetic changes would be needed to the shop fronts.

There may even be funding available to shoot in a socially deprived area.

My preferred choice of actors/comedians for the parts as listed above are :- Rhod Gilbert, Greg Davies, Boyd Clack, Steve Speirs & Rob Brydon.

If possible the preferred choice of the Director is Mr Gareth Gwenllan with his BBC Wales 'High Hopes' team involved.

All music to be drawn from the multitude of hits from the Stereophonics and Manic Street Preachers with a few Max Boyce and Boyd Clack numbers thrown into the mix.

I would hope that the money could be raised by way of Welsh sponsors- Brains Brewery , WRU and any other Welsh Company that would want product placement or direct advertising in the film.

The plot and storyline is based on my published short story ' The Italian Lob' from 2007, which is a road movie of five friends and business neighbours leading from the austerity hit Merthyr Tydfil, through to the brothels of Paris and then to the Stadio Olympico for a 'Wooden Spoon ' decider rugby match in the climax of a poor Six Nations for Wales.

It is also a story about divided loyalties....hence the title Italian Lob.

It is a direct contrast to the 'Grand Slam' - it can be shown anytime when the Team is not at its greatest.

Its target audience would be the proud Welsh people who love Rugby, Beer, and Comedy...ie every Welsh person Worldwide.

The tale starts with the five Glebeland Street businesses shutting up shop on a Thursday Night in late February , ready for a St Davids Day match in Italy on a 'killer' trip of beer, vino and women for five 'converts' in a cramped Union Jack clad mini car , bought on the cheap with one of the characters redundancy money from the former Hoovers factory - as a prop from the 'Spice World' the Movie, and ends with a Welshman inadvertently making the ultimate sacrifice for his Country.

The use of the mini is to illustrate that its occupants are British as well as Welshmen and of course is a further homage to the 1960's film the Italian Job.

There will be several different 'Italian Lobs' too throughout the story which will be revealed by the enclosed script.

I sincerely hope you enjoy reading the 'pilot' script- it is my first ever attempt.

It is my wish that this story sees the light of day as a tribute to my late Father Douglas Evans who died in 2011 and of course my Brother-in-Law and his friends who provided the inspiration for the idea.

Local Estate Agent , refined, debonair, eloquent , but loves himself, sporty, aged 55 , proud for once being being mistaken for Bruce Willis at Paris Airport ...moustache..rich but generous with it.

Local newspaper advertising salesman...52 ...loves a bet...extremely tight with money...has a ginger fetish...married to a ginger lady...very serious and a little quick tempered.

The owner of the French cafe de Glebeland , good looking, fit likes to go to the gym...ladies man ....54 ....but not the brightest....an entrepreneur who likes to hide it from the tax man.