Welsh Society of Oregon: A Christmas in Wales 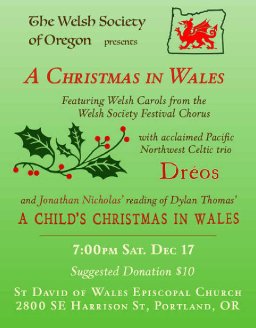 Add event to your Google Calendar.


The Welsh Society of Oregon (WSOR) is again sponsoring a concert event to celebrate Christmas with a Welsh flavor, bringing together Welsh and Celtic music and a reading of a classic Welsh Christmas tale. Suggested donation is $10.

The concert opens with the WSOR Festival Chorus presenting traditional Welsh carols and Christmas songs, sung in both Welsh and English. The chorus will then be joined by acclaimed celtic trio Dréos for a set of beautiful Welsh and Celtic music played on pipe, fiddle and guitar. To top the evening, and continuing a longstanding Portland tradition, Jonathan Nicholas will give a reading of Dylan Thomas’ much-loved tale “A Child’s Christmas in Wales.” The Festival Chorus will close the concert with a little Welsh lesson on a favorite carol — so that everyone can leave softly singing Silent Night in Welsh.

The Festival Chorus draws on the rich traditions of choral singing in Wales, long known as “the land of song.” The chorus was founded to perform at the annual hymn-singing festival (or Gymanfa Ganu as it’s known in Welsh) held at Bryn Seion Welsh Church every year. They have since expanded to a very successful annual Christmas Concert, and also hold a Noson Lawen, a night of fun and singing, every June. They are led by Dr. Jamie Lynn Webster, who also directs the Chautauqua Community Chorus and the Portland Revels’ ViVoce Women’s Ensemble.

Dréos is an ensemble of world-class performing composers who have been described as a Celtic Kronos Quartet. They invent and arrange new and old music using a traditional vocabulary. Combining tight ensemble and superior skill, these musicians have a sound that lives up to the Gaelic meaning of their name - blaze .

Jonathan Nicholas is an author, journalist and avid storyteller. He wrote a column for The Oregonian for 25 years.

The Welsh Society of Oregon celebrates and perpetuates Welsh heritage, culture and music in Oregon and the Northwest. The WSOR is a 501(c)3 non-profit organization. 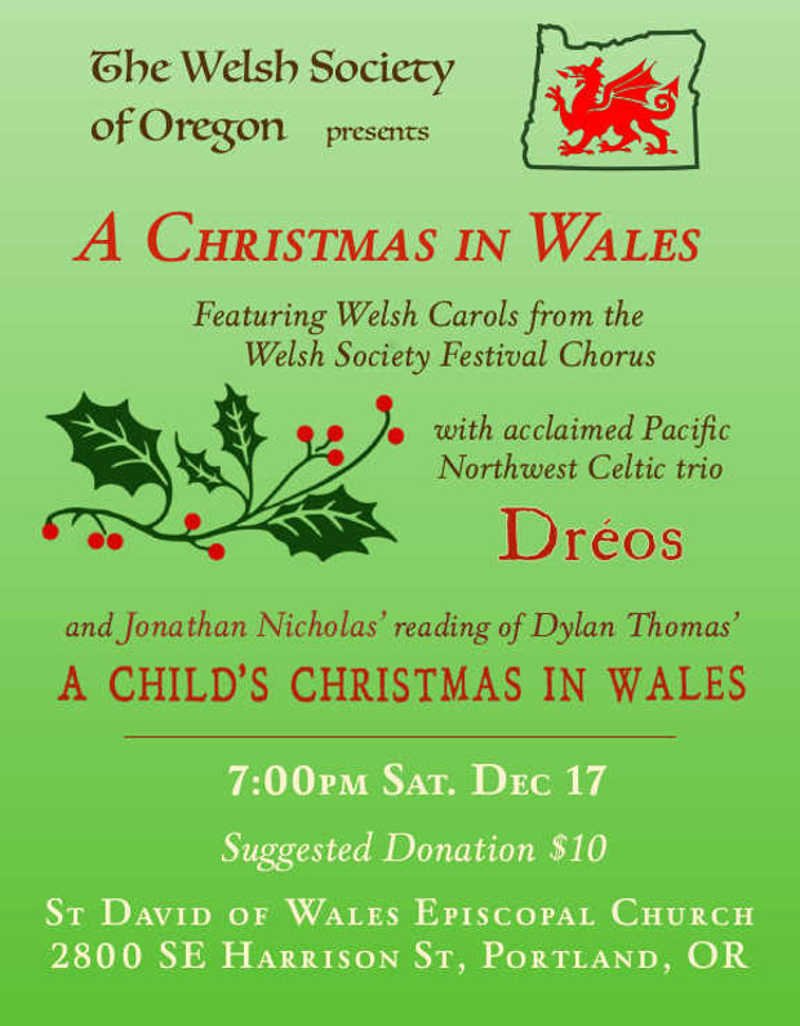