The Moving of the Water by David Lloyd - A Review

Win a signed copy of 'The Moving of the Water' here
...
Every Welsh American should own a copy of this book!   BUY IT HERE

In 'Nos Da' Private Richard Bowen is severely wounded after stepping on a land mine. He rambles, seemingly incoherently, as he recalls the details of his past life. In particular he remembers wishing his father goodnight in the happier days of his childhood. His comrades have no idea what 'nos da' means and assume that he is delirious. As the 'medevac' chopper arrives his friend, Denny, says:-

“ God-damn here at last! No more talking crazy bullshit. You are going home, Richie boy. Back to your cars and your f****** mother and father and girlfriend you maybe have and those baths you love and the sun on the dark side of the moon. Back to the towel. Nose-f******-da, you crazy f***. You’re going home. ”

This is a poignant tale but it is perhaps difficult to suppress a trace of anger at the prospect of another son of Wales dying in a distant land for a cause not entirely his own, whilst those around him know nothing of his culture, heritage and language.

But this cultural anonymity does, perhaps, have its 'advantages'. In 'Eeeeee', the protagonist, a Welsh American named Ben, is offered employment as a local mafia fixer/hitman. A role in which he does not acquit himself particularly well. His employer, Sal, explains why he was picked for the job:-

"If you do good, there’s more of this work for you. Maybe someday that piece’ll be yours for real because I’ve had my fill of goombas f****** up and expecting a pass because they married my second cousin Mona, you know? You heard about that one, right?”

The Welsh, both at home and abroad have always prided themselves on their ingenuity and adaptability. This is reflected here in the story 'Home'. Griff, the caretaker at a local school is found to have converted a portion of the storage area for which he is responsible, into an apartment complete with fridge, TV and all modern conveniences. After his wife's death he moves in. In the course of debating what to do about this situation, the head custodian opines:-

“Griff’s not creepy. He’s messed up. I’m the same. A messed-up old guy. If I hadn’t stopped drinking, I’d be a dead old guy. I retire in two years. Maybe I’ll leave the Algonquin and move in with Griff. Be cheaper too. Think he can make bunk beds? ”

There is much humor in this collection. The comical dialogue in 'Monkey's Uncle' is a case in point. In this tale a nephew (Nye) meets his uncle (Llew) in the pub. The one has recently been released from a mental institution and the other is a notorious drunk. Their communication in the bar and afterwards as they wend their way through the streets of New York is hilarious. Upon arriving at Ny'e mother's house (Ceridwen) after their drunken sojourn they are greeted as follows:-

In a collection which contains so many gems it is difficult to single out individual stories for critical attention. Also, of course we want to avoid too many spoilers. At this point, however, we should mention that one of these tales was submitted to the 2015 West Coast Eisteddfod Short Story Competition. It won and, for those who like to sample before buying, it can be read here:- Dreaming of Home .

The title story delves into the loneliness suffered by a Welsh American widow whose life revolves around her back yard, and those of her neighbors. In this reviewer's opinion it is a minor masterpiece. As the lonely Mrs Bevan awaits a spiritual 'moving of the water' she is preoccupied by a neighbor's pond which annoys her by providing a home for insects, fish and birds. She fears filth and contamination and presses her neighbor to fill it in. Whilst the pettiness and prejudice on display here are humorous this tale is no slapstick offering. Indeed , David Lloyd reveals his character with a subtlety and empathy worthy of the 'greats' ( think Mansfield, Fitzgerald etc )

Of course, all these stories of adversity, loneliness and adaptive ingenuity could be set in any immigrant community. That it reflects universal concerns is one of the strengths of this collection, but the fact that it does so through the prism of Welsh American experience is what makes it unique.

It has been a pleasure and a privilege to review this book and I hope that you, dear reader, will enjoy it every bit as much.

Anchored in the community of first, second, and third generation Welsh Americans in Utica , New York during the 1960's the stories in David Lloyd's The Moving of the Water delve into universal concerns: identity, home, religion, language, culture, belonging, personal and national histories, mortality. Unflinching in their portrayal of the traumas and conflicts of fictional Welsh Americans, these stories also embrace multiple communities and diverse experiences in linked innovative narratives: soldiers fighting in WW1 and in Vietnam, the criminal underworld, the poignant struggles of children and adults caught between old and new worlds. The complexly damaged characters of these surprising and effective stories seek transformation and revelation, healing and regeneration: a sometimes traumatic "moving of the water".

David Lloyd is Professor of English and Director of the Creative Writing Program at LeMoyne College. His previous books include the novel 'Over the Line', the short story collection 'Boys: Stories and a Novella', and the poetry collections 'Warriors', "The Gospel According to Frank' and 'The Everyday Apocalypse'. He lives in upstate New York. 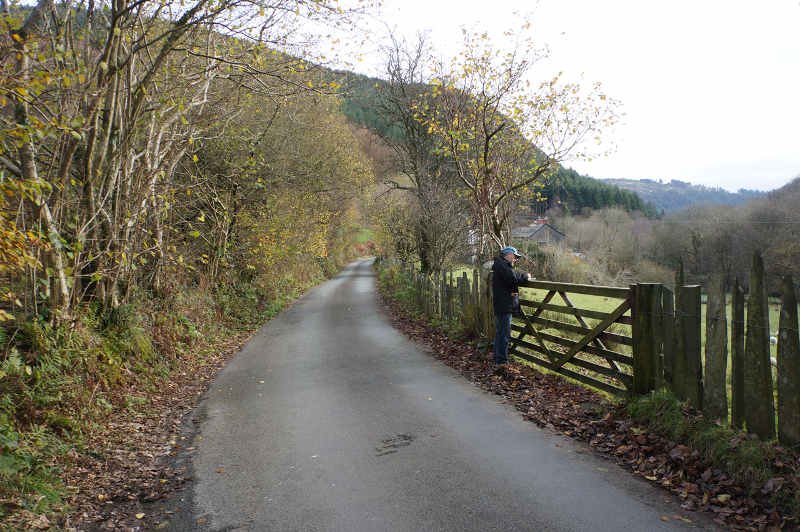 David Lloyd on a road near Corris, where his father was born. ( Reproduced courtesy of Kim Waale)

COMPETITION
We are pleased to announce that author David Lloyd has presented us with a signed copy of 'The Moving of the Water' for a giveaway competition. Just email your answer to the following three questions (all easy, wiki links provided) to americymru@gmail.com . The winner will be announced on March 1st. The competition is open for entrants worldwide and is not restricted to the USA.

1.  American pioneer Daniel Boone (of Welsh ancestry) was born in which year?