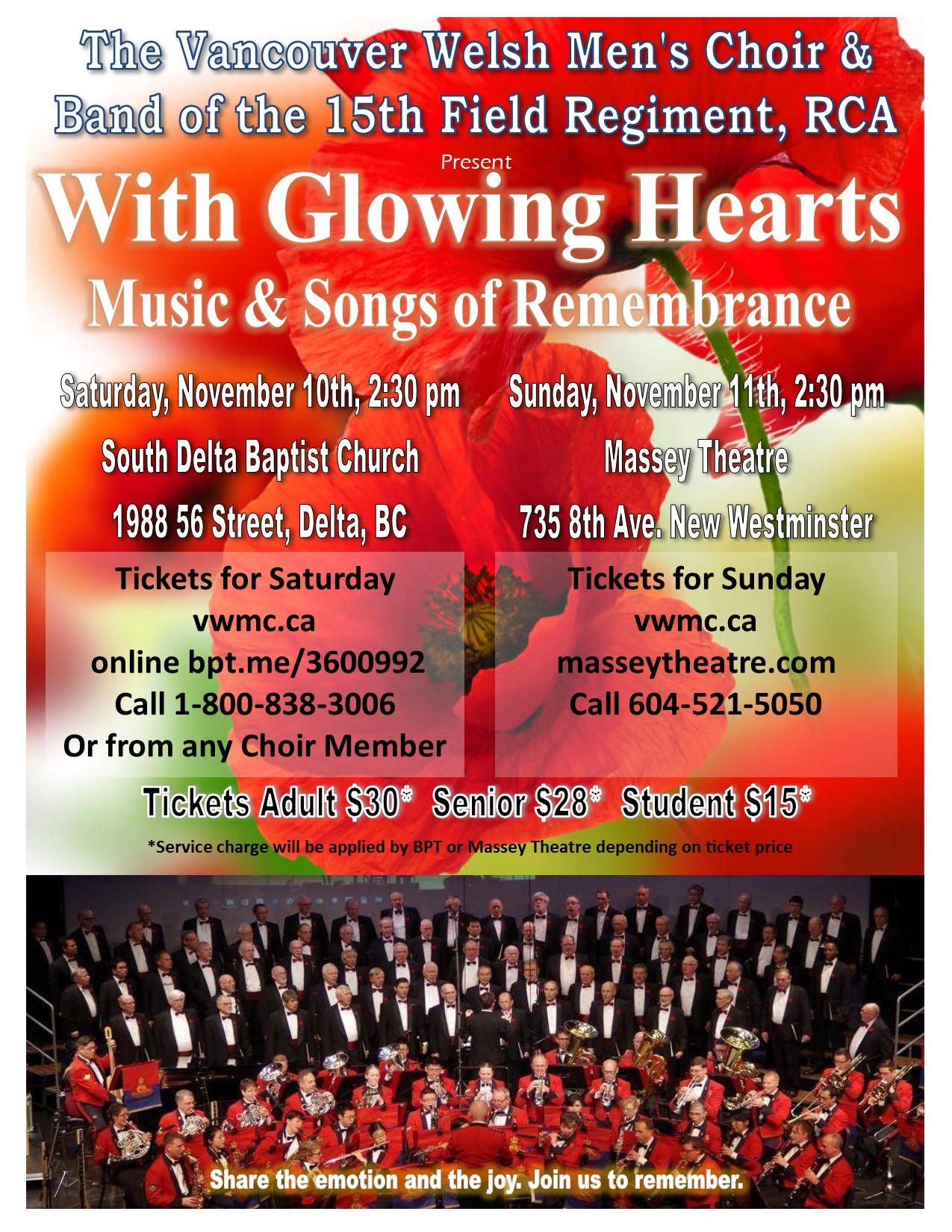 The Vancouver Welsh Men’s Choir (VWMC) was formed in 1980 by Welsh singing enthusiasts, and is now one of Canada’s largest non-profit male choirs with close to a hundred singers of diverse ethnic backgrounds. It tours provincially each year; internationally about every three years. The choir maintains a Welsh singing tradition within a varied repertoire of folk songs, spirituals, show tunes, and Canadiana. We first started doing Remembrance concerts over 20 years ago. Several members of our choir were veterans and had close ties with the military and Legions. It has become a tradition that many of our patrons look forward to each year. This year we are doing two Remembrance concerts Nov 10th and 11th with the Band of The 15th Field Regiment Royal Canadian Artillery who we have performed with for several years.

Music touches the human soul the way nothing else does. It helps us keep in touch with our past and to connect to others of different cultural backgrounds. When the choir tours to other countries the music helps us transcend our differences and come together as brothers and sisters. Music has a unifying and uplifting quality.

In our upcoming Christmas series of 7 concerts, one of the songs we sing is called “Christmas In The Trenches”. It tells the story about how during WW1 in 1914 France, British and German soldiers laid down their arms on Christmas morning and refused to fight. Instead they met each other in “no man’s land” and traded pictures, cigarettes, played games and sang songs. They realized that this was not their war but brought about by politicians and others. Some of the words in the song are: “The frozen fields of France were warmed, and songs of peace were sung. For the walls they’d built between us to exact the work of war were crumbled and were gone forever more.” The song ends with the words, “For the one’s who called the shots won’t be among the dead and lame, and at each end of the rifle, we’re the same.”

These concerts are heartwarming and emotional and enjoyed by all. They are especially meaningful to veterans or anyone who has lived through conflict. In 2017 the choir toured France, Belgium and The Netherlands to honour the fallen, performing at Vimy Ridge, Menen Gate, Juneau Beach, delivering memorable charitable concerts along the route. Memories of this tour will make Remembrance 2018 with the 15th Field Artillery Band RCA an especially poignant concert for choir members.

The choir is a “not for profit” organization with a limited advertising budget. We rely on our reputation and word of mouth to help us share our joy of singing. Some of the comments we have received: “A truly heartwarming and memorable experience”. “A very professional and unforgettable concert”. “It made the hair stand up on the back of my neck”.

The choir produces CD s of its music, available at concerts and online at vwmc.ca