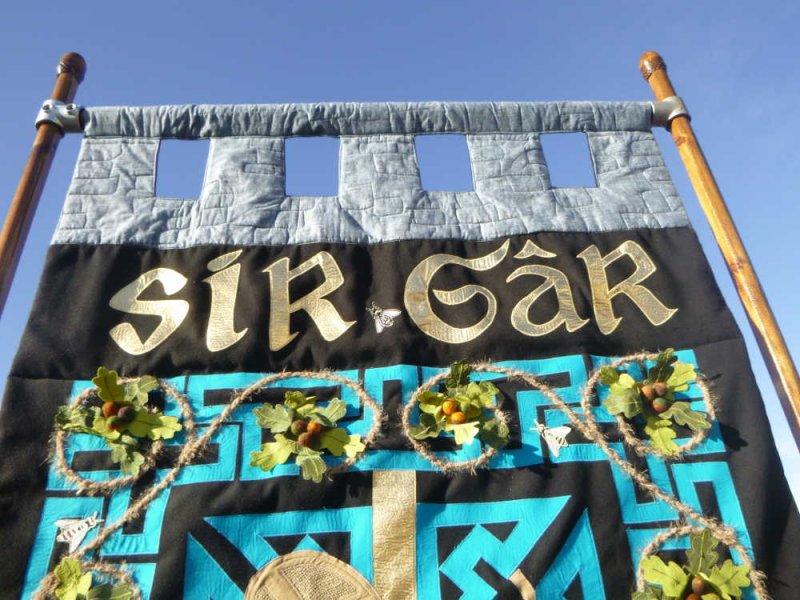 The original idea for a banner for every county in Wales was conceived by Gwenno Dafydd. Her vision was of hand-made banners the size of the coal mining lodge banners, based on the words and images of the Saint David’s Day Anthem, Cenwch y Clychau i Dewi – Ring out the bells for Saint David (Lyrics: Gwenno Dafydd. Music: Heulwen Thomas) and elements of local county history with the aim that they be paraded every Saint David’s Day in their respective local communities.

The second of these County Banners is the Montgomeryshire Banner. Two textile artists Patricia Huggins and Angela Morris designed and made the banner to depict life in Montgomeryshire and the legacy left by St David. Contributions were also made by Pamela Higgs (drawing of Market Hall), Mavis Jones (Needle lace flowers), Shirley Kinsley (dove), Maureen Morris (dyed silk fabric) Also featured are elements from the tomb of the Herbert family to be found in the church of St Nicholas in the old county town of Montgomery.

The third County Banner is the Carmarthenshire Banner and it was designed by Eirian Davies from Whitland and the fine handwork was done by Meinir Eynon from Gwm-Miles. The wooden frame supporting the banner and the wooden acorns on the top of the poles have been made by Denzil Davies from Whitland. The bells have been adapted by Dylan Bowen from Pant-bwlch near Newcastle Emlyn and Natalie Dennis, an ex-student from the Trinity Art Department embroidered the bees (University of Wales Trinity Saint David) Gwenllian Beynon of the Trinity Art Department was very supportive throughout the whole banner making development.

It was created to be paraded in the Carmarthen town Saint David’s Day Parade and will be carried for the very first time on the 24 th February 2017 by Gwenno Dafydd and Eirian Davies in the second town parade.

Some of the symbols The stones across the top and bottom represent castles and bridges across the county. Some of the most obvious examples would be Dinevor Castle and the Cynghordy Aqueduct.

The gold colour represents the gold mines of Dolaucothi.

The black colour represents the cover of the Black Book of Carmarthen and the coal industry in the East of the county.

The triangular shape in the middle is a Celtic symbol (Triskele /Triskelion) that can be seen in the Book of Llandelio (St. Chad’s Book or the Lichfield Gospels).

The coracles are a sign of the ancient craft which is connected to the Taff, Tywi and Teifi rivers.

In the middle of the net the circle formed represents the famous Glass House in the Welsh National Botanical Gardens in Llanarthne.

The oak represents the wizard Merlin’s oak. In addition see the beautiful hand carved acorns on top of the poles that carry the banner.

You can see the blue Celtic patterns on Eiudon’s Celtic Cross, a cross from Llan -Sannan-Isaf, Llanfynydd.

The blue colour represents water as Saint David was also known as Dewi Ddyfrwr (The water drinker) The blue also represents the lakes in the tales of ‘Llyn y Fan Fach’ (lake of the small place) and Llyn Llech Owain.(Llech Owain’s lake)

The bees are part of the tales about Saint David and also make a very prominent appearance on the Pembrokeshire Banner. They have been added to the Carmarthenshire Banner to symbolise the fact that Saint David’s message has spread from the city of Saint David to Carmarthen.

The bells play an important part in the Saint David’s Day Anthem (Ring out the bells for Saint David) and there are five bells, each one representing the five ‘cantref’ or ‘hundred towns’ or areas of Carmarthenshire, that of Cantref Gwarthaf, Cantref Emlyn, Cantref Mawr,(Big) Cantref Bychan (Small) and Cantref Eginog. The raw appearance of the bells also represent the tinplate and steel industries of Llanelli.