Read our review of 'Blessed Are The Cracked' here 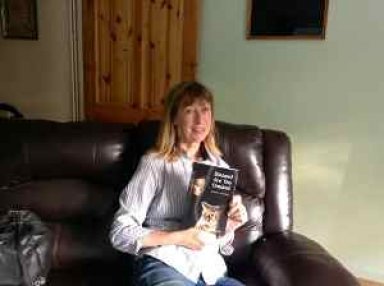 The Seedy Side Of Life In Rural Wales

''A friend is a good egg, even if they are slightly cracked - blessed are the cracked for they shall let in the light''

Buy ''Blessed Are The Cracked'' here

AmeriCymru: Hi Delphine and many thanks for agreeing to talk to AmeriCymru. Care to introduce your recent book in general terms for our readers?

Delphine: My new book Blessed Are The Cracked is the first in a planned series of three set in the fictional west Wales farming community of Llanefa and featuring retired detective Tegwyn Prydderch. It has been described as ''dark crime'' with some disturbing scenes. A reviewer wondered if tourists would think twice about holidaying in west Wales after reading this!

AmeriCymru: 'Blessed Are The Cracked'' consists of a series of five novellas and two short stories. Why did you choose this unusual literary configuration?

Delphine: The novella is making a bit of a comeback by all accounts and this appealed to me as I have enjoyed a few ''shorter'' novels. I read somewhere that people lead such busy lives these days that they don''t want to commit themselves to a very long novel and I thought it was worth trying. However, my courage failed me when I thought about writing a single novella as I''m not convinced that such a work by an unknown writer would hit its mark. I have enjoyed books such as ''A Visit From The Goon Squad'' (Jennifer Egan) and ''Hearts In Atlantis'' (Stephen King), where a series of novellas were combined and inter-linked through characters and over several decades. The more I thought about it, the more apt this seemed for ''Blessed''. I pretty well let the stories set their own length which explains why they range from 10,000 to 22,000 words (for the novellas). Of the two short stories, ''The Family Man'' just seemed right at its length but ''The Perfect Wife'' wanted to run for longer. I decided against it because it is written entirely in dialect and, although I can hear the voice clearly in my head, I wondered if readers would find it difficult to follow if it went on for many more pages.

AmeriCymru: We know that you draw on your experience as a police officer in rural Wales for inspiration. Can we ask if there are any particular cases which are reflected in the stories in ''Blessed''? One shudders to think that the events related in ''Donald''s Cat'' for instance, might have had a basis in fact.

Delphine: Sadly, abuse is common to all police officers, so there is nothing in those stories that I have not dealt with at some time. ''Donald''s Cat'' (Donald is named after my horse, by the way!) is not based entirely on real events but I have had dealings with people becoming trapped in some way - with varying outcomes. As far as the explosives store is concerned, at one point I was involved with going to inspect explosives stores at local privately owned coal mines. They had a regular inspection by police and the security aspect was very rigorous - the earth bank for instance, as mentioned in the story, was a definite guideline. I am a bit claustrophobic and it used to make my hair stand on end every time I saw the explosives store and I used to wonder how awful it would be to become trapped in one.

The story that mimics real life the closest is ''Heatwave (Tegwyn''s Story)'' which was extremely similar to an event I remember as a young teenager. My father worked for the Electrici ty Board and he came home one day and told us about a Meter Reader who had been attacked by a hippy on drugs (though not to the extent it happens in the book). There had also been a murder there that day. It was a big wake-up call to all of us who lived in the area and had never had to lock our doors and cars.

AmeriCymru: ''Blessed Are The Cracked'' is a superb title. How did you come by it?

Delphine: Much as I would love to take the credit for this, ''Blessed are the cracked, for they shall let in the light'' is a quote from Groucho Marx. When I was halfway through writing this book, I had a jokey email from a friend. It showed animals and people doing the daftest things. It contained that quote and then added ''A friend is a good egg, even if they are slightly cracked - blessed are the cracked for they shall let in the light''. The email formed part of the story where Kay receives it from her best friend - the reasons becoming apparent as the story continues! It sort of stuck in my mind and I eventually changed the title to its present form. Strangely enough, the first thing people say is how much they love the title - it has convinced me that I made the right decision! I think it also sums up its slightly off-beat tone.

AmeriCymru: You will be visiting the US in the near future. Can you tell us more about your itinerary?

Delphine: Having never been on a plane until 1998, I have found that I love travelling! A major operation prior to that date made it impossible to fly, so when that medical decision was turned around, there was no holding us back. My husband and I have been to the US twice before but I have never been to New York. So, next April, we are going to an event and meeting up with friends at Lancaster, Pennsylvania but going to New York first. I''m hoping that there will be some interest in my book and I will be able to sell/sign a few while there.

AmeriCymru: Do you read crime fiction? If so, who? What other genres or authors currently interest you?

Delphine: I have a fairly varied choice of reading. I love Nicci French, Sophie Hannah, Ruth Rendell (especially Rendell''s non-Wexford novels - she always creates some kind of weirdo that hooks me like a magnet!). I''m reading a Jodi Picoult book at the moment - I came across her books in South Africa three years ago and I am working my way through them. You will not be surprised to hear that I also like Elmore Leonard - thank you for your kind review on that topic! I am also a huge Stephen King fan - will I sound like a stalker if I say I''ve had a photo taken outside his house? (But, hey, he''s welcome to come and have a photo taken outside MY house!)

AmeriCymru: We know that you are currently working on a follow up to ''Blessed Are The Cracked". Care to tell us more?

Delphine: The follow up to Blessed is to be a complete full length novel rather than the series of novellas (unless I am convinced to do otherwise). I am already well into it though as it goes back a year or two before Blessed, I''m constantly checking the timeline - not as easy it sounds - some characters just WANT to be there but when I check, they''ve already been killed off!

The third book (optimism is a fine quality in a writer, don''t you think?), goes forward to events that Tegwyn Prydderch becomes involved with after Blessed. I''m hoping that Blessed continues to sell well enough to make these two ''new'' books a reality. So far, Blessed has reached No 36 in the Amazon Top 100 in its category, but there is a long way to go yet! Check out the link to my author page and details on Cambria Books or Literature Wales and look up Writers'' Database.

Delphine: I think it''s great that a country the size of the US has some affinity with Wales (which is only slightly bigger than New Hampshire, I believe). If American readers are supporting Welsh writers by buying their books, then I feel very humbled and grateful. I also hope that writers can give something back to those who live in the US but are ''missing'' Wales. Diolch i chi gyd.