An Interview With Paul Durden - Co-Writer of ''Twin Town'

Twin Town is a 1997 black comedy film made and set in Swansea, south Wales. The film was co-written by Paul Durden and Kevin Allen and is the most successful Welsh film ever made in commercial terms. It has enjoyed enormous success both inside and outside Wales and occasioned a fair degree of controversy. In this interview Paul Durden speaks to Americymru about  the film and shares his outspoken views on contemporary Welsh politics. For a selection of clips from ''Twin Town'' go HERE . 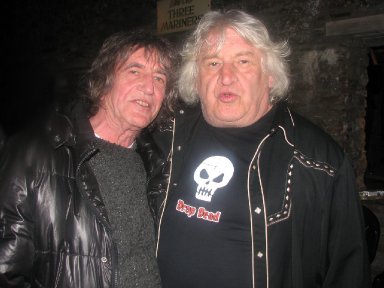 Americymru: ''Twin Town'' is the most successful Welsh film ever. It has reached a massive audience both inside and outside Wales and is considered by many to be a masterpiece. What do you think accounts for its extraordinary success?

Paul: Twin Town on it’s day could be set in any Town in the U K. It’s just a universal tale of vengeance, just a story of how two dysfunctional lads come to terms with there families murders by the police and how they deal with it the only way they know how. Personally I feel the Lewis Twins subconsciously identified with the feelings and aspirations of a lot of Republican families in Northern Ireland who were being beaten up and murdered in there own homes by the British Army.

Americymru: How did it feel to see the completed film the first time?

Paul:   To be perfectly honest, and I’m usually not. Without a shadow of a doubt. In a Nutshell, Absolutely, Stunningly, Passionately, Outstandingly, F***ing Brilliant.

Americymru: We read that there is a sequel to ''Twin Town'' currently in preparation. Care to tell us any more about that? How far advanced is the project?

Paul: Ask me this time next year. If any of us still exist then?

Americymru: You co-wrote "Twin Town" with Kevin Allen - Have you worked together on any other projects?

Paul: Me and Kevin go way back, a long way back, in the past we had collaborated on a few unsuccessful projects that never came to any real fruition. Our relationship is far more social than a work based friendship, it has more to do with hanging out together, binge drinking, showing off, and arguing about things that we both have major hang-ups about.

Americymru: It has been said that ''Twin Town'' is a movie about the Welsh ''underclass''. Do you think that is a fair description and how do you feel about the term ''underclass''?

Paul: Underclass is a word that does not strike any bells with me. If you mean poor, only this week research has revealed that over the last 40 years in the UK the rich/poor pide has widened. What hope is there of any social change and progress by us putting our faith and aspirations in politicians, all the evidence seems to prove that they can only feather there own more than comfortable nests. What a load of greedy self centred privileged bastards. But that is just my personal opinion.

Americymru: Liberal Democrat MP David Alton described ''Twin Town'' as - "sordid and squalid, plunging new depths of depravity". How do you respond to such ''criticism''?

Paul: For once in this creeps pathetic little life I think he is being fairly honest. The Liberal tradition in the UK is one of longer chains and bigger cages for us the masses, in the old days Liberals were federalists and free thinkers. Now they will do anything and pull any strokes just to get a mere smell of political power. I piss on there power hungry lust. As my farther once told me. Liberals are just an organized bunch of don’t knows.

Americymru: Do you think that historically Wales has been fairly or accurately represented in film?

Paul: How Green was my Valley, was made in Hollywood, and it must be set in the only place in the world where they can have a coal pit/mine resting on the top of a hill. All coal mines to my knowledge are to be found in valleys. I do like the Paul Robison film “This Proud Valley” which was made in Wales, before the USA government prevented him from leavening the Land of the Free because of his political leanings. Also the Peter Sellers, Mai Zeterling film “Only Two Can Play” set in Swansea, made in 1962. Written by Kingsly Amis. On a more modern note anything by Karl Francis, the little Devil.

Americymru: You have, from time to time, been an outspoken critic of the political status quo in Wales. What if anything do you think the Senedd has acheived for the people of Wales?

Paul: Sweet F*** All……For once in our lives we got rid of all the Tory MPs, Then what happens the Welsh Assembly bring in proportional representation, and bring them all back in. What a laugh. Then to cap it all they change there name to Government, what a f***ing palaver. But what really summed it all for me was when Rodri Morgan our leader went to the Queen mothers funeral. What for, was he Kowtowing or what, pray inform me, pleases.

Americymru: What is your writing process? How would you typically go about writing a script?

Paul: Have a few beers, roll a few joints, take a few Quaaludes “ Gorilla Biscuits”, put the kids to bed, watch the Big Labowski on DVD. The go for it……..to be continued.

Americymru: Are you involved in any other writing projects at the moment?

Paul: Yes thank you, nice of you to ask.

Americymru: Any final message for the members and readers of Americymru?

Paul: Yes, make damd bloody shure that your President gets the health care bill through Congress. It could change the whole face of the USA and how it is seen by the rest of the world. Good Luck, and try to cut back on the hunting….

Cool, Cool as a Cucumber.