9. Were you able to find compositions or music for this instrument? What kind of music was used for?

"The crwth was a folk instrument, and as such was not supported by a written musical tradition. Both the method of playing it and the music for it were traditionally passed down from father to son, and I gather that there was more than a modicum of guarded secrecy. Sorry, ladies, but the traditional belief was that it was such bad luck for a girl or woman to play the crwth that her so doing would literally wake the dead and send bodies from the churchyard wandering around the town. Morris relates an account of that view in his monograph. I personally do not share that view, by the way!

10. You've composed music for the crwth - is there a particular type or style of composition you think it best suited to?

"I prefer either re-created or adapted to composed in most cases. Everything at this site, for example, is music that was initially fashioned by some talented but anonymous folk artist who probably did not read or write a note of music. There is musicality in each of us, just as surely as there is a penchant for verbalizing. As far as actual composition is concerned, I’ve had in my head for years – decades, in fact - a multi-movement piece called “Twmpath Dawns” (“Dance on the Village Green”) for crwth and orchestra, but I’ve only committed a tiny portion of it to writing. That’s one of so many things on my to-do list for post-retirement. Its style is not at all original, but rather based on that of the dance and ballad tunes that I located in my research, although I’ve not actually copied any of the melodies."

11. How important is the crwth in the Celtic musical tradition?

"I would regard the crwth as very important, although I have come to consider the oral-aural tradition supporting both the playing of it and the music for it, along with music for other folk instruments and vocal music, as even more important, not only because oral-aural tradition is the foundation on which so much else in folk culture is built, but also because what exists only in memories is so volatile and easily lost. Instruments are concrete phenomena and hence more durable entities. That is part of why my doctoral dissertation was on the oral-aural processes in melodic transmission, preservation, and change rather than on an instrument."

12. Do you believe that the crwth can make a comeback? Does it have a place in the mainstream musical tradition?

"I think it already has made a comeback as part of the larger emergence of both popular interest and scholarly inquiry in Celtic music. As to whether or not it will attract a huge following, I suspect not. We must remember that, of all the music education programs in our schools, strings in general tend to be the smallest group in terms of participants. For example, in American public schools, band members outnumber orchestra members ten-to-one, although, interestingly, studies have shown that string players are more likely than wind or percussion players to keep playing their instruments after finishing their formal educations. In my son’s high school, there were four huge bands and one orchestra of modest size. Given the limited number, although usually the deep dedication, of string players, I suspect that the crwth attracts and will continue to attract a relatively small but intensely devoted group of adherents.

Technically the crwth is in general far less facile then modern orchestral string instruments, and it’s not supported by either the huge written musical tradition or anything even remotely approaching the instructional regimen that exists for them. It is best suited to the music for which it was created, which is but one enjoyable but narrowly circumscribed segment of the entire Western instrumental music repertory. Hence I suspect that, while someday the crwth may enjoy an even greater status than it now occupies as an historical instrument useful in, for example, certain movie soundtracks or period and/or regional compositions, it will never stand as an equal partner with the violin. This is certainly not to speak disparagingly of the crwth in any way. After all, within the continuum of its particular repertory it can provide its own accompaniment and in so doing perform a feat at which the violin is far more limited except in the hands of a few of the greatest virtuosi.

There always is the possibility, of course, that a composer will come along who specializes in writing for instruments outside the usual academic milieu. There, in fact, was such a composer in the last century. His name was Harry Partch. He even invented some special instruments, in some cases by adapting earlier designs, and I seem to recall that he wrote for some antique instruments such as the panpipes. To the best of my knowledge, he wrote nothing for the crwth." 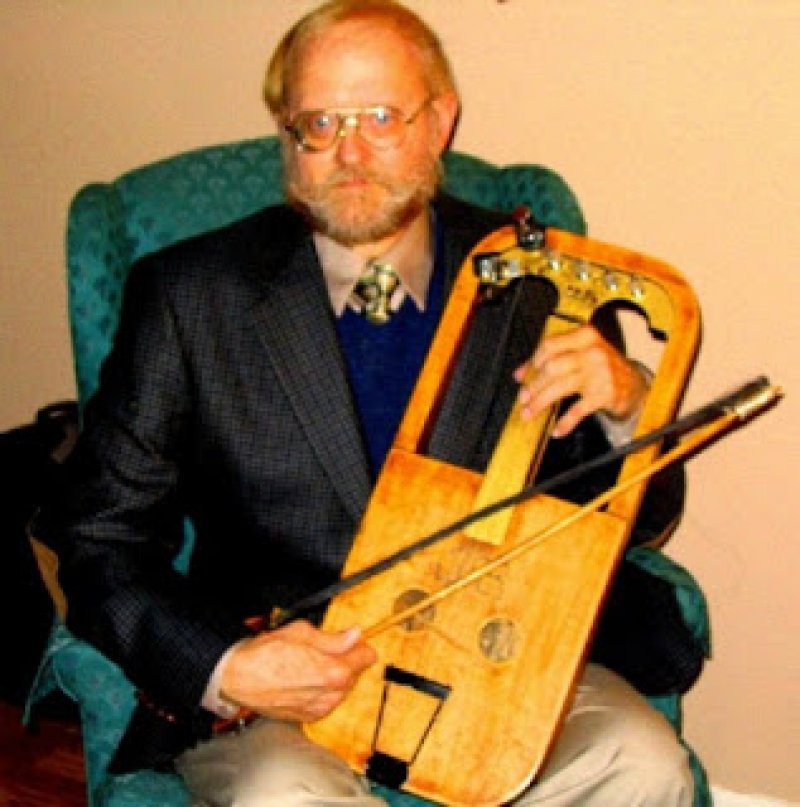 13. Other than on this site where can people obtain samples of your work?

"There is my personal website, which includes the main crwth page that’s linked on my Americymru page. For direct access to my online bibliography of publications and presentations, go to http://home.earthlink.net/~llywarch/pubpr.html.htm It includes listings for my studies in other areas as well as those on the crwth.

My other “crwth pages” are as follows:

A copy of my thesis is available via university interlibrary loan from the Music Library of the University of North Texas, Denton, Texas, 76203. Also, as I’ve previously stated, I make and mail copies for the cost of production and mailing. I plan to put the whole thing, with revisions reflecting what appeared in my running supplement of addenda, online eventually."

14. Do you give live performances or demonstrations with the instrument?

"Yes, I do, although not all that often. I’ve performed with a harpist at the Mucky Duck Pub in Houston, a location where entertainment often includes live Celtic music, and I’ve performed at wedding receptions and various fundraisers for the arts in the Houston area since the late 1970s. At one point I was with Young Audiences of Houston. Also, I was once on “Inside Area-5,” a feature news program in the Dallas area, not too long after completing my thesis. For more detail, see my performance advertisement listed above."

06/16/09 07:09:34AM @andy-j-crowder:
Fantastic, DR B is indeed, the Formost Authority ,on the Instrument of my Ancestors,amongst other notable works, the Titanic Band, Apalacian music, just the tip of the Ice bergBig Respect, and great to see it here...Thanks Ceri, mateand may I say, I am very impressed with the level of functionallityand options with this whole site that you have created here,Ive been Doing My Space Face bookk, and You Tube, and SeriouslyThis is one of the best I have found,Bloody Brilliant!!!