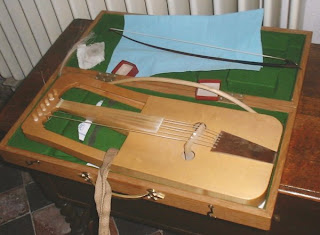 3. Can you tell us a little about the history of the instrument?

We should remember, first of all, that crwth, which literally means protuberance or a swelling out , and probably refers to the rather hunch-backed appearance of both the most recent instrument and most of its forebears, denoted several different small, hand-held lyres that were used in western Britain at least as far back as the early eleventh century. The modern crwth, meaning the most recent instrument so designated, was one of the last of the bowed yoke lyres. That large and diverse species seems to have emerged around A.D. 900, when the bow crossed over both the Bosporus and the Straits of Gibraltar, entered Europe in a sort of pincers movement, and was applied to pre-existing European lyres that previously were plucked. It’s important to keep in mind that bowed instruments did not emerge along a single line, and that, in particular, the viol and violin did NOT emerge from the crwth and similar lyres when the yoke of the lyre was removed and the sides were incurved to facilitate bowing. Independent fingerboard lyres (that is, those with fingerboards but no yokes), including those with sides incurved for acoustic reasons, were developed as plucked instruments in the Middle East, perhaps as far back as around 3000 BC. One school of thought treats them as an entirely separate family from the lyres, calling them collectively the lute family. They, too, crossed over into Europe during the first millennium of the Common Era and later had the bow applied to them. It is from those that the viol and violin emerged. Unlike the viol and violin and their larger relatives such as the viol da gamba, violoncello, lyra da braccio, and double-bass viol, whose designs became standardized, the bowed lyres existed in many different forms in various regions of Europe and were used as instruments of the minstrels until the end of minstrelsy shortly after the close of the Middle Ages. After that, they were absorbed into the various local folk cultures, where a few of them survived in practice until fairly recent times. The Scandinavian talharpa , for example, could still be found in use as late as the early twentieth century, although it appears to have emerged prior to the advent of the modern crwth.

The modern crwth seems to have sprung from at least one and perhaps multiple closely related immediate prototypes within the Welsh folk culture, probably around 1500. It thrived there as a fiddle used at country dances and in some cases by ballad singers (the “newspapers” of the time and place) until around 1730. It seems to have been played most often as a solo instrument but on occasion in ensemble with the harp ( telyn ) and hornpipe ( pibgorn ). The crwth and pibgorn, along with dancing, were victims of the rise of the evangelical Protestantism, specifically Calvinistic Methodism, that swept Wales, much like the Great Awakening in America, in the 1730s and ‘40s. Large numbers of those instruments, along with decks of playing cards and other so-called implements of the Devil, were destroyed in what can be described most accurately as a mad orgy of religious fervor. The harp, due to its academic associations, suffered much less. The crwth and pibgorn survived, albeit in much smaller and diminishing numbers, in some remote locations for about a century beyond that time. According to oral tradition, the last of the old crythorion , one James Green of Bron y Garth, died in 1855.

With the establishment of musicology as a recognized discipline, initially under the leadership of German scholars, in the early twentieth century, came an interest beyond the dilettante level in old music and old instruments, including the crwth. Unfortunately, many of the early investigators were less than careful in their treatment of instruments outside the academic mainstream, and it was at that time that many erroneous notions regarding the crwth arose, including the view, representing misapplication of Darwinian biological theory, that the violin emerged when the yoke arms were removed from the crwth and the sides were incurved. Also prominent were romanticized, utterly unsupportable notions such as that of the crwth’s having been played at Stonehenge and elsewhere by the Druids. Still another error was that of superimposing academic performance technique, primarily that of the viol, onto the playing of the crwth. Much of the research since then, including mine, has been devoted to debunking earlier views and approaching the crwth and other folk music phenomena from within the native cultures as much as possible, not from some far-removed point in the academic mainstream.

4. How would you describe its sound?

"In brief, the sound is something of a cross between a fiddle and a bagpipe, especially when the tuning in paired fifths is employed. A tuning in paired seconds is still mistakenly regarded as standard. Initially it was reported by only one writer, Edward Jones, in his Musical and Poetical Relicks [sic] of the Welsh Bards , and then subsequent writers picked up on that and passed it along unquestioningly. The tuning in paired seconds is practical for playing chords, but very impractical for the playing of melodies. The tuning in fifths, with a dominant between the two roots or keynotes, has numerous precedents and parallels in the history of European string instruments, and turns the crwth from a dull, droning instrument into a reasonably nimble melodic executant with the ability to support its own melodies harmonically – in essence, a self-contained string ensemble. The tuning that I use is based on William Bingley’s report in A Tour Round North Wales . While Bingley almost certainly was in error in reporting the height to which the highest string was tuned, I suspect that he was more generally correct in reporting a tuning in paired fifths (for example G-g-D-d for the strings over the fingerboard). That is very similar to George Emerson’s report of the Scottish fiddle tuning G-D-g-d ( Rantin’ Pipe and Tremblin’ String ), a tuning that also used to be common among the old-time fiddlers here in America, especially in Appalachia, where chordal playing made possible by nearly flat bridges was once very common. Tuning in paired fifths, incidentally, differs from standard violin tuning in that the latter is in consecutive fifths (G-D-a-e) to facilitate mainly melodic playing.

5. Were you a violin or other stringed instrument player prior to discovering the crwth?

"Yes, I was a violinist. I still am, and one of my favorite activities is directing a group of youngsters in a string orchestra program. I’ve played my crwth with their chamber ensemble, or top group, on occasion, using my arrangements of traditional dance tunes, and we’ve all had a great time with that."

6. Was it difficult to move from the violin to the crwth? How different is playing the crwth, and how is it different?

"Yes and no, with regard to difficulty. At the time I was reconstructing crwth performance methodology, I had been away from the violin for over a year, so the shock was minimal. The biggest adjustment was learning to apply a lot more pressure to the crwth bow. A bow drawn across the strings at an oblique angle, rather than at a right angle as on the violin, will “ice skate” out of control, and also produce a thin sound, if it’s not pressed firmly. Pressing it firmly, of course, produces a tone that’s totally taboo on the violin – namely, a lot of upper partials and plain, old squeaks. That sound, however, was prized among crythorion . There’s an old Welsh adage that states in translation, “Let him who plays his crwth sweetly be hanged!” I have found going from crwth back to violin more of a challenge than going from violin to crwth. It’s easier to go after an instrument somewhat aggressively, as one must do with the crwth, than to approach it with the care, restraint, and meticulous finesse that one must use in playing the violin. I suspect the adjustment would be not quite so marked, at least in terms of right-hand technique, if I were a double-bass player."

7. How widespread is the crwth today? Are you aware of other crwth players, groups or crwth makers?

"I would say that it is more widespread now than it was when I began my research. More importantly, it is now more often viewed and played as the non-academic, folk instrument than it was, as opposed to the prevailing pre-1970s methods that were based on academic technique. Certainly the crwth, along with the bagpipe, penny whistle, and other traditional Celtic instruments, has benefitted from the enormous, almost exponential, explosion of serious, disciplined scholarly interest in, as well as the increased general popularity of, traditional Celtic music over the last thirty years or so. I have seen crwths advertised in a number of catalogs, including that of Lark in the Morning. I know that there are a number of makers both in the U.S. and the U.K. Anyone interested in obtaining one should have no trouble locating a maker on the Internet. Since I have my own, I have made no inquiries myself. Anybody interested in making an historically correct crwth of his or her own might find handy the appendix of my thesis, which includes detailed descriptions and diagrams of known originals and copies."

"That question makes me think that I need to write a tutorial on the subject. At the risk of sounding dreadfully conceited, which I’m really not, I’d suggest my thesis. I can provide copies, at production and mailing cost, to those who are interested. It does not include a tutorial on playing the crwth, but it goes into more detail than any earlier document that I know of in describing what appears to have been playing methodology. A summary of that can be found in my online abstract of “Some Observations Regarding Crwth Performance,” the URL of which is:-

I also would be happy to answer questions in e-mail, as in fact I’ve done on occasion over the years ( llywarch@earthlink.net saves the trouble of writing via Americymru). If there appears to be enough interest, I can eventually post some information online, but of course that cannot be done overnight. Having said all that, I should stress that the crwth has not been the focus of my musicological activity for over twenty years. During that time there may have been written one or more tutorials that are based on reliable investigations and that avoid advocating academic technique such as one would use with the viol or violin.As far as previous knowledge and skills are concerned, a background in playing strings is helpful, especially an understanding of how whole steps involve spaces between the fingers while half-steps do not, if one is a violinist or violist. If one is using the diagonal cross-torso hold that I prefer (holding it up like a violin makes working the drones very difficult), a background as a cellist could be useful, except that the distances between the points of contact on the strings are smaller. Probably the biggest problem regarding left-hand technique is that of extending the thumb sideways and plucking the drones. That gives the entire hand sort of a claw-like character that is totally alien to orchestral string playing. The thumb rests against the side of the instrument’s neck on the violin and viola, and it rests on the back of the neck of the cello or double-bass.Anyone seeking tutelage from any crwth player needs to find someone who is knowledgeable of the crwth’s history in performance, and particularly someone who does not treat it like an academic instrument. In other words, run for your life from anyone who teaches the crwth as merely the less agile cousin of the violin or viol!"