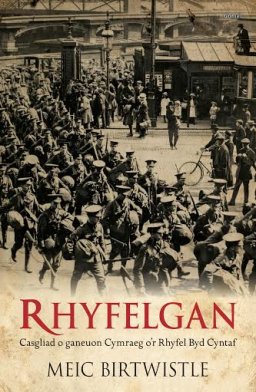 A collection of Welsh wartime songs…

A unique collection of Welsh songs from the First World War will be launched at the National Eisteddfod in Abergavenny this year. The author, Meic Birtwistle, along with Welsh folk singer and harpist Siân James, will present Rhyfelgan   in a special event at the Tŷ Gwerin on Wednesday, 3 August at 3pm.

A century after the First World War, this book features Welsh-language songs composed and sung at the time, some in support of the war, others expressing vociferous opposition to it.

A number of the songs haven’t seen the light of day for a hundred years, and many of them are published here for the very first time.

The author’s interest in these compositions began when he learnt that one of his relatives, John Volander Jones – a minister, writer and keen supporter of David Lloyd George – was in fact the author of a number of popular Welsh songs about the war.

Meic Birtwistle says: “It’s often the case that soldiers who have been through war don’t want to discuss their experiences. This was true of my father and his experience of the Second World War. This is why it’s so important that such wars are not forgotten, and it’s our responsibility to ensure that this doesn’t happen”.

“A century after the Great War, I feel that there’s been a tendency to sanitize and moralize the war, and portray it as a just war. However, that’s not how I was taught about it in school, in college or by my community and family. One of the aims of this book is to

highlight the voices raised – in song – against this unnecessary fighting.”

“My family’s history has given me a distinct perspective and responsibility to study and declare my conclusions about the use of songs to support or oppose the war.”

As someone who was originally destined to be a soldier himself, Meic Birtwistle is aware of the danger of romanticizing the war, as happens in a number of the songs in the collection.

Following his research into the musical context of the time, Meic reveals some treasures that still resonate through the years. They are in the tradition of ‘Oh! What a lovely War’.

The new book Rhyfelgan by Meic Birtwistle will be available at your local bookshop or directly from the publisher, Gomer Press on www.gomer.co.uk

 Meic Birtwistle is an experienced journalist and

 He studied for a BA and MA in History and Welsh

History at Swansea and Aberystwyth Universities.

 He lives in Mynydd Bach, Ceredigion and enjoys his

work, politics and rowing in his spare time.