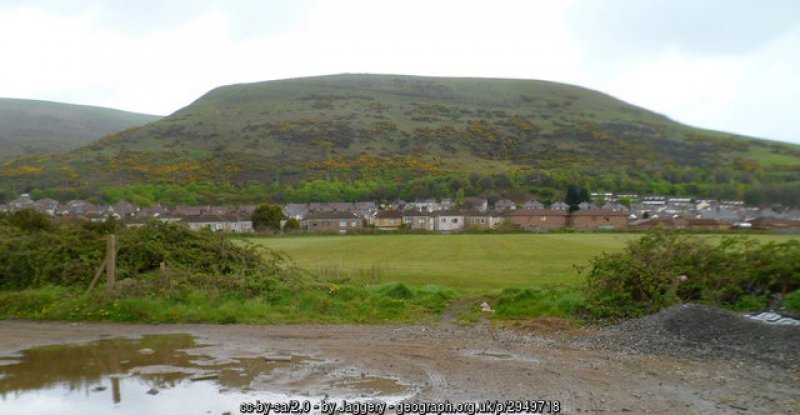 Hi all, Beryl Richards here.. As you know I live in South Wales, in the heavily industrialised town of Port Talbot. I have long been interested in Welsh history, but the early Bronze and Iron age, I sort of dismissed as being a 'long way off' and probably not relevant to me or where I live. I had seen pictures of iron a forts or enclosures but in no way were they associated in my mind with smokey ol' Port Talbot. Which in a roundabout way brings me to the subject of my new novel which has a working title of 'The Mountain', and the thought process which led to writing it.

I picked up in a second hand bookstall a copy of a slim volume entitled “Antiquities of Margam Mountain” which immediately aroused my attention. It is written by a gentleman called Bill Howells and sponsored by the Llynfi Valley Historial Society. It is a very interesting book illustrated with some airial photos of the mountain and some taken by the author. There are illustrations of prehistoric tracks burial mounds ancient farms and forts all over the mountain. The realisation suddenly dawned on me that outside my own front door were the vestiges of an advanced urban society. Further research led me to another book written in the thirties by Cyril and Ailen Fox entitled “Forts and Farms of Margam Mountain' documenting the same information that Bill Howells so graphically highlighted with new technology.

A frail little book called Tir Iarll (The Earls Land) which I again found in a thrift store seems to have been published as a child's textbook on local customs also gave some account of the site of Margam Mountain, I wrote to the Glamorgan and Gwent Archaeological Trust on various statements in this book but some of it was discredited as Iolo Morgannwg's (a self styled Bard of Glamorgan) rantings. Apart from the old Ordnance Survey maps which confirm a lot of the evidence I have found for Iron age inhabitation on Margam, this is about the only written evidence I have been able to find on this subject. But the actual site speaks for itself.

There is no direct evidence of the Roman influence on Margam Mountain. The Glamorgan and Gwent Archaeological Society give no credence to this. As the site has not been excavated there is according to them no direct evidence that the Romans trod Margam Mountain. However other sources state that the Romans had a presence there and some indications of this can be found in the old place names such as Mynydd Ty Talwyn, and further west at Rhyd Blaen y Cwm. One of the locations is named Cwm Lladfa, Valley of the Slaughter where it is claimed that the last battle between the Romans and the Silurians was fought locally.

There is physical evidence of a Roman Fort at Neath (Nidum) and remnants of what is known as marching camps is strewn across the uplands. The Old Ordnance Survey Maps indicate some of these geographical features as scenes of battle fought between the local tribesmen and the Romans. As there is not yet archaeological evidence of any of this we can only wait until the whole mountain is excavated properly. Its all shrouded in Celtic mist!!!!

The Silurian tribes or familial groupings range from Eastern Wales down as far as Loughor in the West. A well organised rural/urban system stretched across these hills. It was thought by many early historians, that the iron age celts did not have the ability to build such a complex system of roads/tracks settlements on the mountain tops and the thinking was that they were Roman. But archaeological excavation has proven that these were Bronze/iron age sites built and engineered by the indigenous population, who also had codes of religion law making and customs particularly their own. The term 'forts' is a label for the many enclosures found scattered across the West Walian hills and also throughout the British Isles. Many of these enclosures were of obvious strategic importance and could also have been used as enclosures for cattle and people in times of strife.

Much emphasis was placed on the oral memory of history and of healing techniques by the Druids, who had a great influence over Celtic Society. They were priests, law givers, healers and were often used to negotiate in times of war between two or more rival clans. The Celts loved to fight and argue, today this takes place on the Rugby field. Celtic myth propagated by the Victorians portrays them as blood thirsty human sacrifice fiends. Human sacrifice,was practiced but to a much lesser degree than the popular celtic hocus pocus will have us believe. Although they used the innards sometimes of animals for divination (ugh!!!)

Celtic dress was flamboyant and colourful. Men would wear homespun trousers, a simple tunic and sometimes a cloak held by an ornamental pin, the more decorative indicated a higher social status. Women wore a long robe which was also homespun and dresses were secured with a sort of a celtic safety pin, very often beautifully decorated. They loved jewellery and ornaments. The ruling classes often wore huge intricately decorated gold torques and arm rings. They loved colour, bangles rings and much of what has been internationally excavated such as the golden cauldrons found at various locations place them in the realms of high art, and not the ignorant savage portrayed by the Romans. (Early racism??). Tribal chieftains and kings were often elected by the clan. Often there was a familial line from which they were elected.

There were many festivals held at the quarters of the year, which also acted as an agricultural calender were used to foretell the advent of winter, summer, autumn. Festivals such as midscummer and the advent of winter played a huge part not only in the gathering of crops but fertility rites, the drinking of wine of which they were very fond and the really spooky time when it was said that the veil between the dead and the living was the tiniest, today celebrated as Halloween.

The Silures were a tribe which lived in familial and village groupings in South Wales and fought off Roman occupation for some 25 years longer than in other parts of Britain. The Romans recognised them as worthy opponents. Their method of guerilla warfare locally continued until early medeavil times as was documented in the annals of Kenfig Castle, now covered by sand, but thats another story!

I am trying to answer the question of the underestimation of the Silurians. They seems to have had a quite sophisticated urban society with laws and customs which did not die easily with the onslaught of roman occupation. The remains on Margam Mountain which as I have mentioned contained the traditional enclosures or hill forts at strategic points along the hilltops, have not been archaeologically excavated but further east there are many sites which have yielded a definite identity, which did not seem to have been undermined by Romanisation. The end seems to have come unfortunately with the advent of Christianity when the Celtic identity was melded into what we now recognise as the Celtic Church with numerous monasteries, and hermitages being established along the South Wales coast and also inland.

I like to think that the spirit of the Celts remains in the gritty character of Port Talbot as it exists today. The realisation that such a society existed here has prompted me to write another novel which is a work in progress.

Every so often I get fascinated by something I read, or an aspect of local history of which I was not aware (which are many) prompted me to write a novel entitled 'Golconda' which is in part based on the facts about the early copper industry based in Castell Nedd (Neath) West Glamorgan. The story concerns a young American woman named Holly Darby who attempts to find her Welsh roots. I created a real stinker of a villain named Edward Hawksworth who seduced, cheated and plotted his way to achieve wealth. Holly and her friend (with benefits) trace the story from Castell to the states of her Welsh heritage. I have endeavoured to draw on a number of historical facts and blend them in to this story, in order for Holly to find closure in what can sometimes be quite a fast paced but rather sad story.