What? A Welsh Western?

I have called All Through the Night (my new book) a Welsh Western for the simple reason that I think, only half tongue-in-cheek, that cowboys were as much invented in Wales as in Wyoming.

My story is about a group of men who drive a large herd of cattle a great distance, through a wild landscape, across rivers and over mountains, threatened by rustlers and ne’er do wells (sounds familiar?).

The bond between these drovers (cowboys!) is strengthened by the shared experience of overcoming the various threats they face on their journey. Basic human decency can win through in the end (even more familiar?).

It is not that fanciful to think that, amongst the many thousands of Welsh people who emigrated to North America from the time of the Welsh Quakers settling in Pennsylvania in the 1600s onwards, that there would have been men who had worked as drovers, driving cattle to market from Wales to England and London in particular. I like to think of some of them later bringing their skills to bear in a new country, rich in opportunity for those with the courage to forge their way in the tough challenges of cattle driving. 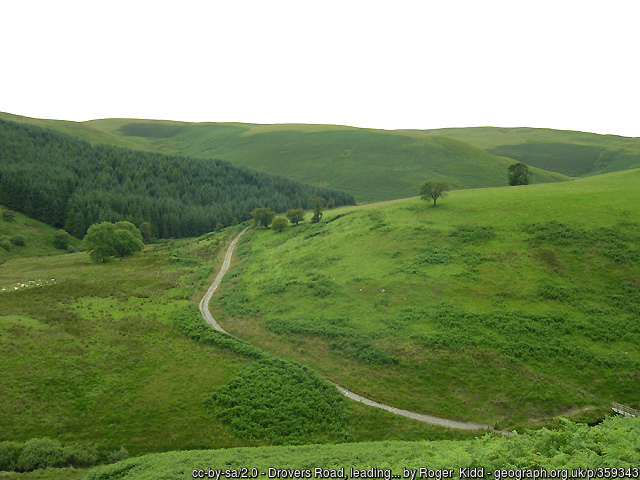 It is for this reason that All Through the Night , my story of a Welsh cattle drive in the 1790s, should appeal to lovers of Westerns: those fictional exploits of cowboys which examine the fundamentals of human nature. Westerns form a rich cultural body of work comprising countless books, films and TV series. Maybe crossing the Menai Strait in Wales with a herd of cattle is not as romantic sounding as fording the Rio Grande, but maybe, perhaps, a few Welsh cowpokes did both?

We also know, interestingly, that, for example, the James gang, the most famous cowboys of Welsh descent, were led by the brothers Jesse and Frank James. Their family had originated in Pembrokeshire in Wales and, as others from amongst their forbears were Baptist ministers, they clearly were the disreputable side of the family. Maybe some of their ancestors in Wales had been outlaws and, as alluded to in my book, could have inspired their exploits.

We don’t know for sure quite how many, or in what way, the Welsh, from the country that the nineteenth century author George Borrows called Wild Wales , went on to help shape the Wild West, but it is fun to speculate.

My book too is very much a homage to Wales and its music and culture - it even quotes Welsh songs. I see that aspect, in a way, as part of the tradition of Westerns with their familiar harmonica, guitar, honky-tonk piano or banjo music. These and other elements of Welsh cultural traditions in the book will appeal to the many, many thousands of US people with Welsh ancestry.

The Welsh diaspora to America began in the 17th century, peaking during the 19th century, and today there are over ten million people in the USA and Canada with Welsh surnames. Many Welsh North Americans still treasure their Welsh heritage and actively help to preserve the rich traditions through joining Welsh societies and organisations, by celebrating St David’s Day, organising events, festivals and eisteddfodau, and hosting choirs and entertainers that visit from Wales.

Other examples of all this are:

You only have to search the internet for a few seconds to find numerous entries for famous Welsh Americans. For example, you will find famous US Presidents with Welsh ancestry listed as including Thomas Jefferson, John Adams, John Quincy Adams, James A. Garfield, Calvin Coolidge and Richard Nixon (!)

An example of the importance of this (to me, at least!) is that on a plaque mounted on the east facade of the imposing Philadelphia City Hall, the following inscription is found:

Perpetuating the Welsh heritage, and commemorating the vision and virtue of the following Welsh patriots in the founding of the City, Commonwealth, and Nation: William Penn, 1644-1718, proclaimed freedom of religion and planned New Wales later named Pennsylvania.

Thomas Jefferson, 1743-1826, third President of the United States, composed the Declaration of Independence.

Robert Morris, 1734-1806, foremost financier of the American Revolution and signer of the Declaration of Independence. Governor Morris, 1752-1816, wrote the final draft of the Constitution of the United States.

More recently a ‘Friends of Wales Congressional Caucus’ was formed on Capitol Hill in Washington DC to help further develop business, academic and cultural links between Wales and the USA.

My book is another Wales/US link, maybe the missing one, between cowboys and cowboyos!