Coming To America - An Interview With Mari Griffith

AmeriCymru: Hi Mari, it's been a while since we last interviewed you on the site and you have an exciting announcement to make, yes?

Mari: Yes, to both parts of that question, Ceri. You last interviewed me on the web site in August of last year, on the publication of my second novel The Witch of Eye . But the reason why I have an exciting announcement has more to do with my very first novel, Root of the Tudor Rose . When you interviewed me about that one, I told you that I was committed to spreading the gospel about the Welsh origins of the Tudors, the most famous dynasty in "English" history. And it's this missionary zeal that's bringing me to the US at the end of June, to address the American Conference of the Historical Novel Society with a presentation entitled The Tudors: an English dynasty? (I shall be saying this with the same imperious expression used by Dame Edith Evans as Lady Bracknell in the Importance of Being Earnest when she pauses, looks down her nose and says disdainfully "... a handbag!" If you don't know it, you'll find it on YouTube -  A Handbag )

AmeriCymru: What can you tell us about the HNS and the conference?

Mari: The HNS is the international Historical Novel Society, which exists to promote and encourage the reading and writing of historical fiction. They bring out a review every quarter devoted to new historical fiction and they've said some nice things about both my books in that.

Root of the Tudor Rose was featured in their 'New Fiction' section and the review of The Witch of Eye in November last year hailed the book as "... a thoroughly enjoyable read, a very well-researched story, where the narrative licks along irresistibly." I was delighted by that, of course. The Society holds a conference every year, alternately in the UK and in the States. Last year it was held in Oxford and the American visitors raved about the magical 'dreaming spires' of that lovely old university city. This year the conference takes place in Portland, Oregon, which gives me the opportunity of visiting a part of America I've never seen before. I'm told it's wonderful and I look forward tremendously to seeing it for myself.

AmeriCymru: So this is not your first visit to the States?

Mari: No, it will actually be my fourth. The first three were all in order to make programmes and I particularly enjoyed making a documentary programme for S4C about the Welsh/American baritone Thomas Ll. Thomas. His middle name was Llyfnwy but not many Americans could manage that! The reason why I was so interested in him was that he came from my own home town of Maesteg in the Llynfi Valley and the family emigrated to Scranton, Pennsylvania in the 1920's when Welsh mining engineers were much in demand. "Llyf", as the family called him, didn't go into mining: instead he became one of the most famous singers of his generation, often featuring in opera and concerts in New York and all over the country. Eventually, he became known as "The Voice of Firestone" because he presented and sang in "The Firestone Hour", the hugely popular television programme of light music, transmitted live every Sunday evening and seen from coast-to-coast. Not bad for a little Maesteg boy! You've never heard of him? Tell you what, I'll write an article for you one of these days ... or perhaps he should be the subject of my next historical novel? Now, there's a thought!

AmeriCymru: Sounds like a fascinating story. But, to get back to what we were talking about - do you have any other plans while you are in the States?

Mari: Well, the HNS Conference itself only lasts for three days which means that I'm going to have quite a lot of free time on my hands, depending on how long I decide to stay. I rather fancy making that wonderful train journey down the coast to California to take in a few places I've heard of but never visited. Then perhaps a week in San Francisco before flying home because my other half, Jonah, describes himself as an ageing hippie and nothing would please him more than to have his photograph taken somewhere significant in Haight-Ashbury. So we're likely to be kicking around the area for a week or so and, of course, this gives me the opportunity of visiting some Welsh Societies in the area if anyone would like to invite me to come along and talk to them. Believe me, I could talk the hind leg off a Welsh dragon about all sorts of things - my old career as a broadcaster, my 'new' career as a writer, the origins of the Tudor dynasty and why I wanted to write the first book ... or even Thomas Ll. Thomas' career if need be. In Welsh or in English, of course. Just get in touch via my web site at Mari Griffith

AmeriCymru: Any final message for our readers?


Oh but we have heard of him!

In fact Gaabriel has an ancient recording of his Welsh Traditional Songs in the Victor Musical Library Builders series (pictured below). She picked it up from a Goodwill store about 10 years ago. We still play it from time to time. 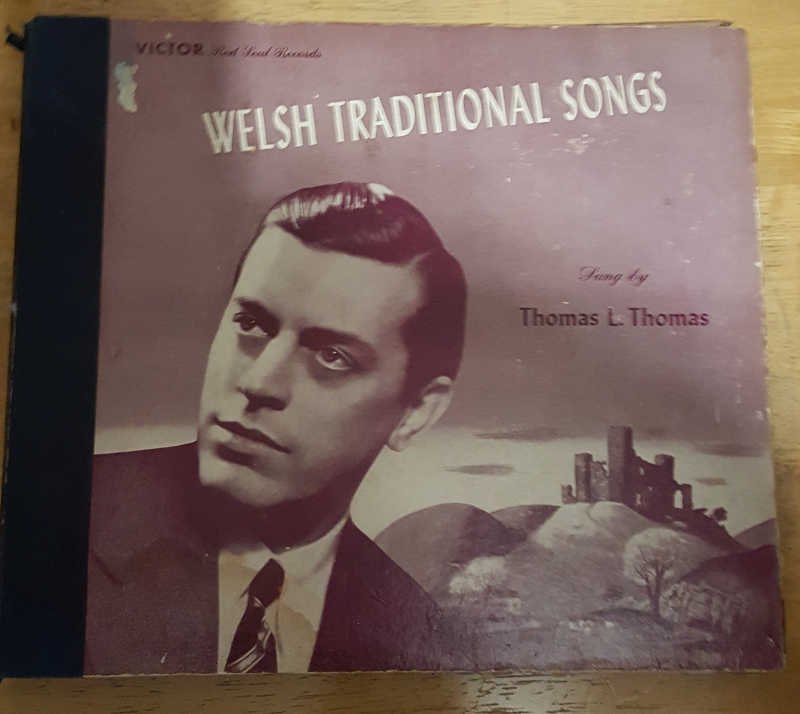