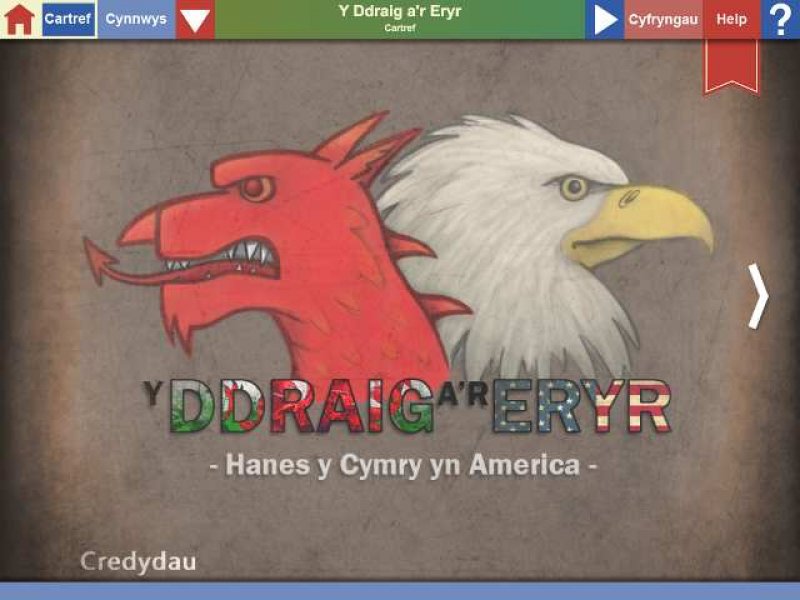 "It is a story of conflict and conciliation, of antagonism and integration, of greed and generosity.”

This is how Cerys Matthews begins her voice ­over of the first video in The Dragon and the Eagle / Y Ddraig a’r Eryr, an enhanced eBook on Wales and America. Published digitally by Cardiff­ based Thud Media, the English language version was launched on August 30 at the North American Festival of Wales in Minneapolis by its author/producer Colin Thomas.

The term ‘app’ understates what a breakthrough this is in Welsh publishing. For the first time in Wales, history is being related by means of video, music, interactive maps and text in a single digital product.The project tells the often ­dramatic story of the way that Welsh emigrants became Welsh­ Americans and how they maintained their distinctive identity over four hundred years.

It includes some forgotten Welsh ­American heroes – farmer Cadwalder Morgan who spoke out against slavery, missionary Evan Jones who stuck with the Cherokee Indians during their ‘Vale of Tears’ exile, and miner’s wife Mary Thomas who played a leading role in a bloody strike in Colorado.

But it doesn’t ignore those who tarnished the reputation of Welsh­ Americans – dentist Hiram W. Evans, who became the leader of the Ku Klux Klan, and Llewellyn Morris Humphreys, aka ‘Murray the Hump’, right hand man of Al Capone.The video sections in the project include some of Humphreys’ home movie footage.

The Dragon and the Eagle is now available for iOS and Android devices:


The Welsh language version, Y Ddraig a’r Eryr is also available on both iOS and Android:


A bi­lingual trailer/intro is available at www.thudmedia.com/ and clips or sound  tracks from other sections can be made available for publicity purposes. Colin Thomas is available for interview, Helen Davies for Welsh language interviews and Ben Cawthorne, its designer, for technical aspects of the project.

Colin Thomas was a BBC staff director until he resigned ove rwhat he saw as censorship of programmes he had directed in Northern Ireland. Since then he has produced C4’s history of Wales The Dragon has Two Tongues , directed dramas and documentaries for ITV, S4C, C4 and the BBC and has written the book Dreaming A City on the embattled city of Donetsk. His awards include a Prix Europa, the Jury Award at the Celtic Media Festival and, on three occasions ,the Best Documentary/Drama­Documentary award from BAFTA Cymru. The Financial Times wrote of C4’s The Divided Kingdom that it “bears the name of Colin Thomas as one of its directors, a guarantee of intelligence and scrupulous integrity.” Bill Jones, the Professor of Modern Welsh History at Cardiff University, describes The Dragon and the Eagle as “a very lively, entertaining and informative work; it tells the story of the Welsh in America in an excitingly new and innovative way.”