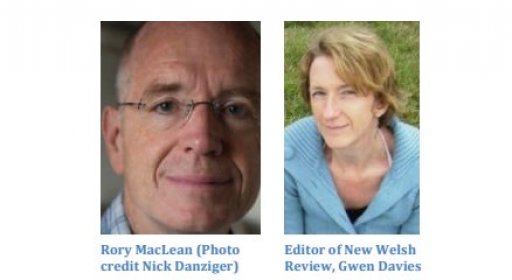 New Welsh Review is delighted to announce it will be running its New Welsh Writing Awards 2016 on the theme of travel writing in association with the University of South Wales and CADCentre UK and will be open for entries on 19 January 2016 . The judges are New Welsh Review editor Gwen Davies and award winning travel writer Rory MacLean, author of ten books including best sellers Stalin's Nose, Under the Dragon and Berlin: Imagine a City.
The Awards celebrate the best writing of short form non-fiction (5,000-30,000 words) from emerging and established writers based in Wales or who have been educated there. The New Welsh Writing Awards 2015: WWF Cymru Prize for Writing on Nature and the Environment was won by Eluned Gramich for Woman Who Brings the Rain: A memoir of Hokkaido, Japan (published 15 October 2015, £2.99 Kindle ebook). Eluned said about her win: “This Prize has given me the confidence to treat my writing seriously. I’m now writing a novel again, and this time I am determined not to give up.”
First prize is £1,000 cash, e-publication by New Welsh Review on their New Welsh Rarebyte imprint in 2016, a positive critique by leading literary agent Cathryn Summerhayes at WME, as well as lunch with her in London. Second prize is a weeklong residential course in 2016 of the winner’s choice at Tŷ Newydd Writing Centre in Gwynedd, north Wales. Third prize is a weekend stay at Gladstone’s Library in Flintshire, north Wales. All three winners will also receive a one-year subscription to the magazine. In addition New Welsh Review will consider the highly commended and shortlisted nominees for publication in a forthcoming edition of its creative magazine New Welsh Reader with an associated standard fee.
The shortlist will be announced at an event at Hay Festival on 1 June 2016 and the winner at a ceremony at the Royal Welsh College of Music and Drama in Cardiff on 7 July 2016 . Full details, including terms and conditions, will be found online from 19 January 2016 at www.newwelshwritingawards.com .
Gwen Davies, editor of New Welsh Review says: “Since economy and precision is what journals champion, it's right that these awards celebrate the shorter publishing formats that our digital age has made possible. When fellow judge, prize winning travel author Rory MacLean and myself make our adjudication next summer, I'm sure we will unveil a host of talent to add to the stable of writers on travel that have already found a home in the pages of the magazine. I hope that Rory's ambition, invention and stunning prose style will inspire newcomers to the genre and veteran travel hands alike.”
Co-judge Rory MacLean says “Only by experiencing the world from another person's point of view can we begin to understand that person or society.  Borders are bridged most powerfully by individuals, through characters and stories, by evoking empathy. Hence the enduring importance of travel and travel writing, and of this competition that goes to the very heart of the matter.”
Dr Nic Dunlop, Head of English at the University of South Wales, said: "We are delighted to be working with New Welsh Review to find the best writing talent in Wales and beyond. This Prize has already discovered Eluned Gramich’s beautifully crafted essay writing and we are very much looking forward to revealing more talented writers of the future."
Ali Anwar, Managing Director of CADCentre UK, added: "The CADCentre is delighted to support the New Welsh Writing Awards for a second time, celebrating the work of writers from Wales and those who are educated here nurtures and raises the profile of our writing talent. Building links between the business and the arts communities should be a creative experience and a source of inspiration for both, especially in a country which has a deep and innate respect for culture.”
The New Welsh Writing Awards 2016: University of South Wales Prize for Travel Writing is sponsored by the University of South Wales and CADCentre UK. New Welsh Review has also partnered with WME, Gladstone’s Library and Tŷ Newydd Writing Centre for this project. New Welsh Review Ltd is supported through core funding by the Welsh Books Council and hosted by Aberystwyth University Department of English and Creative Writing.
For interview requests and review copies of Woman Who Brings the Rain by Eluned Gramich, please contact Megan Farr on marketing@newwelshreview.com or 07912149249.