The Welsh Englynion of the United States – A Call for Help

As I’m sure most of you will know, the Welsh, when they emigrated to the United States, brought with them their language and their culture, and very often built chapels in order to maintain them. If you look around the graveyards you will quite often find brief four-lined stanzas, commemorating the deceased. Unbeknown to most, this represents a tradition stretching back in to the Middle Ages and quite possibly further, into the mists of early Celtic poetry.

These little poems may look quite innocuous but, in fact, they are composed on one of the most demanding metrical systems of the world, a craft which can often take years to master. Each line of this 30-syllable stanza is composed of closely alliterating or rhyming phrases, and this is simply a summary of the most basic rules of cynghanedd (harmony). These aren’t strict rules meant to pretentiously elevate the poem to some idealised level of complexity – they are all about playing with sound so that a piece appeals not only to the mind but to the ear as well. It is only the better poets who master this. This meter is commonly known as an englyn , with englynion as the plural. Our earliest good examples are from about the twelfth century, where they formed parts of a much longer poem, an awdl . By the fourteenth century at least these englynion were being used as independent poems, often for lighter issues than the elegy and praise of the great court poets.

In 1654, in the middle of the Cromwellian interregnum we our first known example on a gravestone, from Llanigon in south-east Wales, very close to the English border, composed to a young student of the law at London. This tradition grows slowly for the next centuries, as the traditional poetic order declined and the was maintained by the lesser gentry, priests and other enthusiasts. Nevertheless the tradition is unbroken. About the 1830s, with the growth of chapels, increase in literacy the proliferation of Welsh journals and newspapers and books the number appearing on graves increases dramatically. The content is quite often a stark warning about the briefness of life, a statement of the hope for resurrection but quite often we find poems to important figures or ones commemorating murders or deaths in battle, tragic accidents, midwives, surgeons, a British prime-minister and so on.

One could confidently estimate that we have at least 25,000 of these with great numbers not having been recorded from large parts of Wales. We have many in England too, especially in Liverpool which sported an immensely Welsh-speaking community a little over a century ago. There are many on the graves of the war-dead, especially from the First World War, in Belgium, France and Palestine for example. More relevant is that we know of many from the United States but it seems that few have been recorded and we are rapidly losing the local knowledge about the deceased and the poets, as the language has receded and the stones are deteriorating with time. We desperately need to find volunteers willing to search the graveyards where the Welsh were buried, record the inscriptions and ask for further information.

Vast lands and seas did I travel

Until I came to a foreign land.

To seek my rights from this furrow

To lie with its deceased.

The highest known englyn in the world is from Russel Gulch (at 9,150 feet) in the Colorado Rockies. Owen Jones died in 1856 at 56 years. Many coalminers had emigrated, having the necessary skills to work in the industry. Owen died from complications after a ball of dynamite exploded in his hand, blowing off one of them and many fingers from the other.

From an unhealthy poor life – from the grasp

Of every misery and corruption,

He went to his Father to the land of the feast

Of passion and peace. 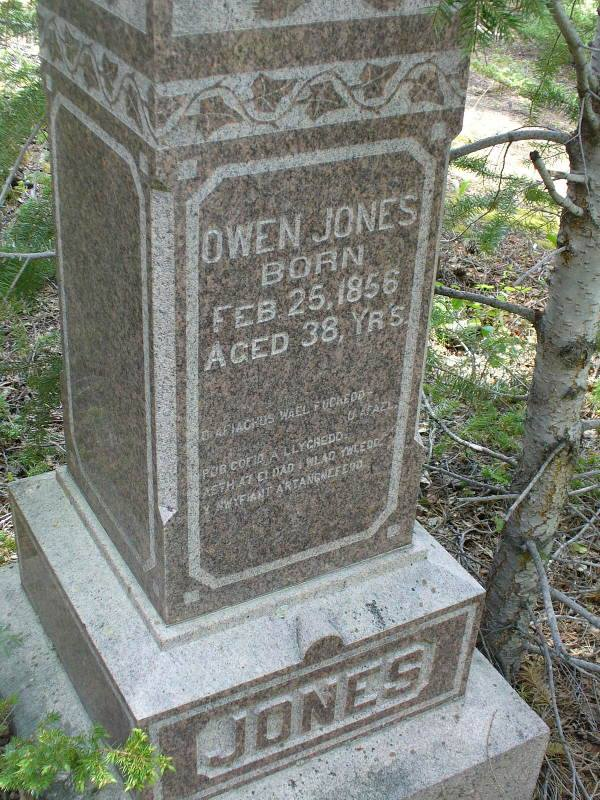 There is a shorter couplet, to John Tyson, 1857 (52), in Slateville (Pennsylvania). This is where many north-walian slate quarrymen emigrated.

Completely by he who gave it.

Sometimes, the deceased is commemorated on the family grave in Wales, such as Barbara Owens, Tre’rgarth, 1859 (22), Eglwys y Santes Fair; MW.

Despite dying in the land of America – and tarrying

In a faraway land,

Brief was the life of lonely Barbara

Far away she slumbers, but here she lives.

The inscriptions are largely in Welsh, something which might present a challenge to the survival of local knowledge. The following is to Henry Williams in Slateville, from Nant y Graean by Bangor. He died in an accident on January 4 th , 1868.

A dir ei ofn a derfynai.

The true Oracle he loved – the word of the Lord

Correctly he would announce,

And to his grave in peace he went

And the hardship of his fear ended.

The following is to a noted poet, preacher and writer, Richard Foulkes Edwards (Rhisiart Ddu o Wynedd), 1836- 1870 (34) Oskosh, Wisconsin. He was originally from north-east Wales and had won the chair in the 1864 Eisteddfod in Llandudno. This is the one attended by the great English poet Mathew Arnold, who so fervently wished to see the end of the Welsh language and culture.

Great was the grievance of placing so young – a minister

To the dead in a foreign field

The Black Poet to the soil of the earth.

The hand of mercy came to beat upon the door

Of Richard the Black from Gwynedd.

For that the saint from the valley of death,

Will be saved to glory.

Motionless is the bard and writer – a man of God

Under a slab of marble;

Great, deep woe that the grave closed a door,

And turned over such a treasure.

I have yet to ascertain where the following is located, the details not having been noted in the online site. Margaret Williams, 1875, 58 years old.

Futile now is to seek her.

Never again will she return to me

Feeble is her strength in a bed of shale. 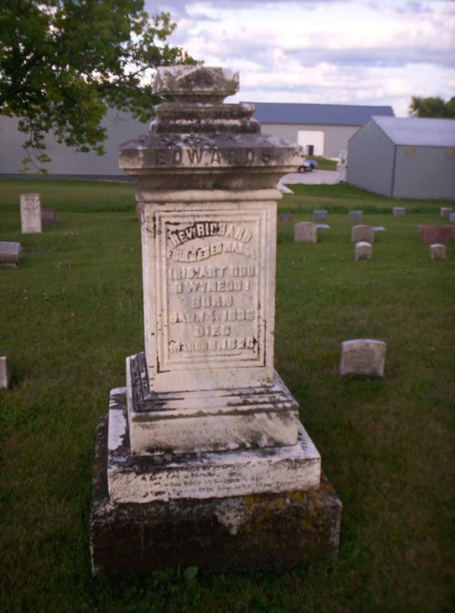 Another commemorated in Wales is Thomas J. Williams, 1908 (34) in the graveyard of the church of Llanfihangel-y-pennant; He was buried in Boulder, Colorado.

Far from his country in Colorado – he fell asleep

Tom the vigorous his bearing.

But with one voice in his old land

A fair haven, will remember him.

Occasionally the englynion are noted in Welsh journals. We need to search Y Drych, at some point. The following occurs in Y Gwladgarwr (The Patriot, 1839), but states that the poem is on the gravestone. Gabriel Davies, Cincinnati, Ohio:

I chwilio byd , a chael bedd.

See the abode of his feeble body – but above

Tragic was turning from Gwynedd

To explore the world but to find a grave .

These are but a brief selection of the dozens currently known to us, but works in journals and comments from the United States indicate that we may have a far larger corpus of important poetry waiting to be recorded. If anyone can help in visiting graveyards and just asking around this would be hugely appreciated. It is already late to be embarking on this work, but hopefully not too late. Please do snap away with your smartphones and take pictures of the gravestones, the chapels and the cemeteries. All information is important. There is an urgency to this work. You can either contact me directly at gutorhys@yahoo.com or otherwise upload photos and comments to the Facebook group Englyn Bedd . In advance I’d like to say diolch yn fawr .