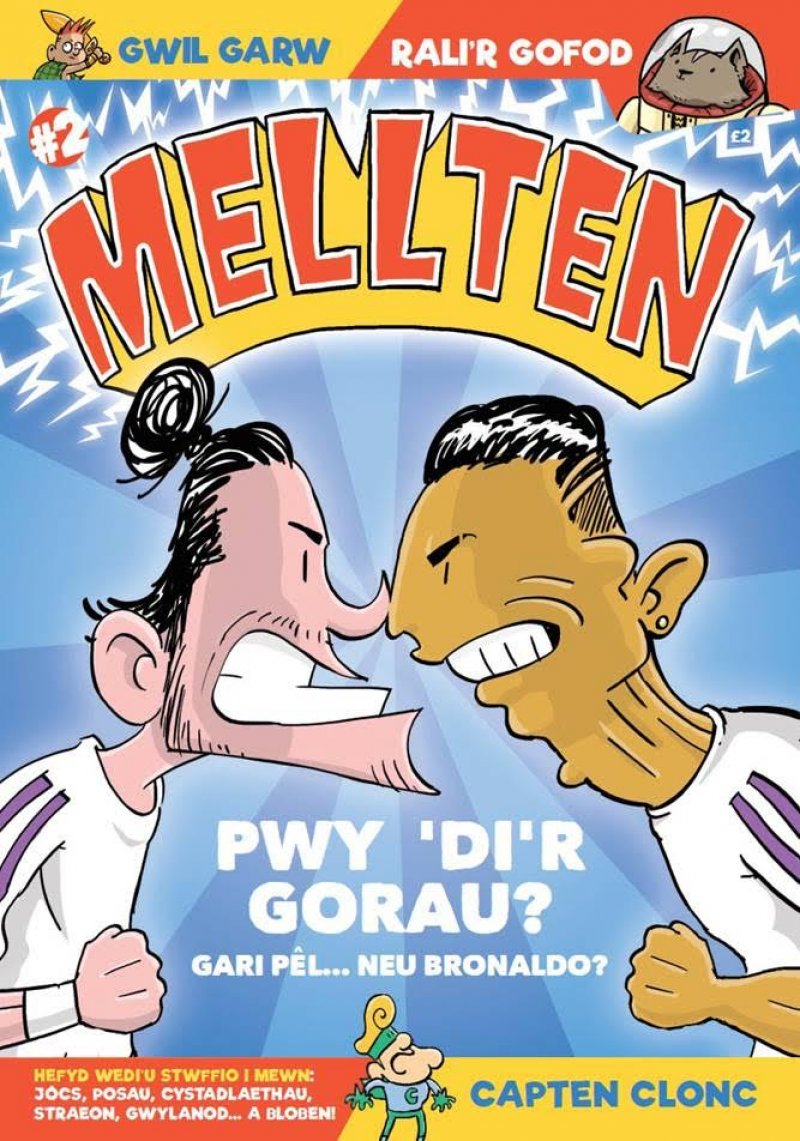 The characters Gari Pêl and Bronaldo go head to head in the latest issue of Mellten – published this week, as the two have a competition to see who is the best football player.

This is the second issue of the new quarterly comic for the children of Wales, comic Mellten .

Mainly aimed at children between the ages of 7 and 13, this is the first original Welsh comic to be published in decades. Edited by Wales’ best and most original cartoonist, Huw Aaron, Mellten contains contributions from many artists, cartoonists and authors.

Between the pages of the second issue, we reunite with characters such as Gwil Garw, a hero from an age before history who loves collecting and fighting monsters, Bloben and Capten Clonc – the most handsome hero in the universe. We also follow the adventures of Iola, the young pilot who dreams of winning the Space Rally Competition but she is stuck on planet Cymru Newydd (New Wales).  The second issue will also include the favourite ‘Ble mae Boc?’ (Where is Boc?) with the poor little dragon lost in Cardiff city stadium amongst a crowd of excited Welsh football fans!

There is also an opportunity to win a pair of tickets to see the Wales rugby team play against Japan at the Principality Stadium on the 19 th of November.

‘It has been fantastic to see the enthusiastic response of the children of Wales to the first issue of Mellten and the second issue is full of adventure, silly jokes and colourful characters!’ said the comic’s editor, Huw Aaron.

Huw Aaron will also be joining in the fun and festivities of the ‘Enormous Weekend’ in Caernarfon this weekend as he visits Penygroes Library at 10 am and Palas Print at 2.45pm on Saturday the 17 th of September in a cartoon making session.

The next issue of Mellten will appear in December but the fun will continue on the website with new content added regularly.

Mellten is available to buy separately or by subscription through the website, schools, local bookshops or Y Lolfa publishers.

Huw Aaron will be at Palas Print in Caernarfon on Saturday the 17 th of September between 2.45pm and 3.45pm as part of the enourmous weekend.

The second issue of Mellten (£2, Y Lolfa) is available now.

A Referendum on Welsh Independence?


I think the request is entirely reasonable. As things stand Wales was conquered in 1282 and has never voluntarily acquiesced in its membership of the UK. Lets suppose we have a referendum and a majority vote no to independence (regretfully a likely outcome imho). At least we will have had our say and for the first time we would be true members of the 'union'. It would also set a precedent for future votes which might be decided differently. Either way we will no longer be a colony. With the current moves toward independence in Scotland and Northern Ireland it is only fitting that we too should have our moment (regardless of which way we voted in the Brexit referendum). 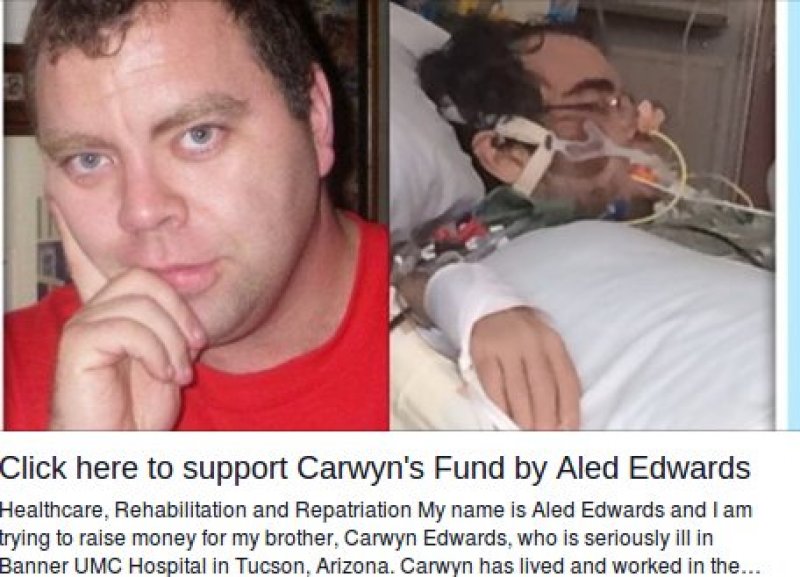 Carwyn Edwards has probably done more to promote Wales in the USA than any other man alive. He inspired us and hundreds of others to take up the cudgel. He is now seriously sick in hospital with infective Endocarditis. If you have anything to spare please support this campaign!!!!

For those of you who don't know Carwyn Edwards let me just say that he was the most influential promoter of Wales in the USA for many years. He inspired me, Dave Parry and o thers to spend our time productively and promote Cymru. The news of his current medical condition is devastating!! We must help our own AND Carwyn Edwards is the first among us. His Wales Newsletter went out to 30,000 people a week long before AmeriCymru was born. I have donated personally and I will give more. Please help this online Welsh American pioneer in his hour of need!!

"He is suffering from Infective Endocarditis, which is a bacterial infection in the blood that settled on his mitral heart valve. This growth grew to abo ut 2cm, and then started showering blood clots throughout his body. This has led to him having his left leg amputated above the knee and he will also lose part of his lower right leg. The clots have also seriously damaged his kidneys and spleen and he is presently on constant dialysis. The clots found their way into his brain causing lesions and hemorrhaging. This brain injury is delaying the open heart surgery that he needs to replace his heart valve." https://www.gofundme.com/carwyn

Orlando, FL. (January XX, 2016): A consortium of Welsh marketing and promotion experts have joined forces under the Bay International Group banner to promote Welsh art, talent, culture and products in the USA. Led by Bryn Yemm and Stuart Rowlands, the new entity’s Corporate Headquarters is based in Orlando, Florida with satellite offices in Abergavenny, Monmouthshire and Los Angeles, California.

“We have thought for a long time that Welsh industries, especially the arts, have been underserved in the United States,” says Managing Partner Bryn Yemm. “At Bay International Group we have the marketing and promotional knowledge and contacts to open those ‘all important’ doors in the USA that can mean the difference between success and failure.”


Bryn Yemm, has made his reputation as an international entertainer and marketer. Yemm was born in Brynmawr (Breconshire), Wales and now spends his time between Orlando and Abergavenny. A successful performer and producer with his own record label Bay Records and Bay Promotions, he is featured in the Guinness Book of Hit Albums UK, and was the subject of a BBC TV documentary featuring his life and work. Yemm specializes in promoting, presenting, hosting, performing and representing corporate interests. Corporate clients have included FW Woolworths, Littlewoods, Variety Club International and Mano Maritime. 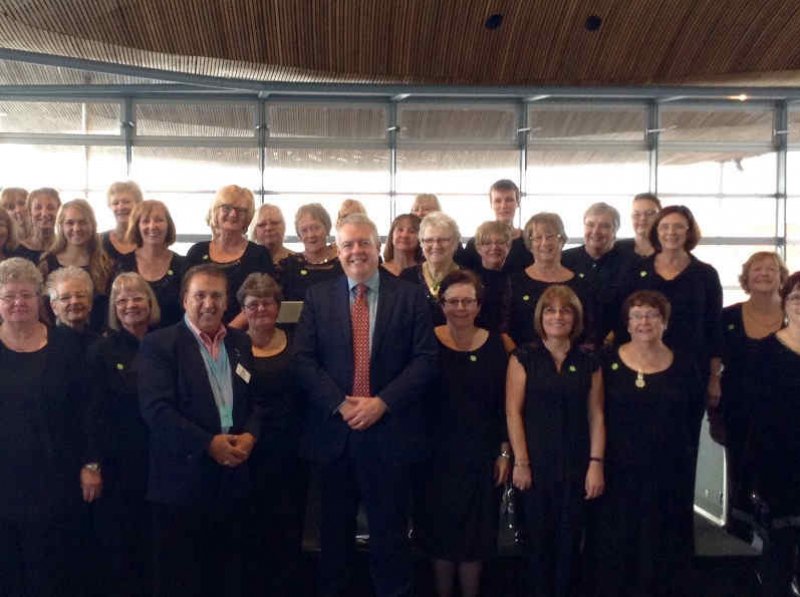 Left Front - Bryn Yemm with the Rt. Hon Carwyn Jones AM, First Minister of the Welsh Assembly and the ladies of Bridgend Tenovus choir.

Heading PR and publicity for Bay International Group is Stuart Rowlands. Born in Newport, Monmouthire and brought up in Abergavenny, Wales. Rowlands has handled PR duties for the Nobel Peace Institute, Nobel Peace Concert, IMG, The Quebec Ministry of Tourism, Honda Racing Corporation, and Colgate-Palmolive. In his early career he worked with Island, Decca and Playboy Records and such acts as Tom Jones, Spencer Davis and Rod Stewart. His current clients include Lucas Oil and the MAVTV Motorsports television network. He is also an avid documentary filmmaker (ESPN) and writer for publications around the world.

US Sales for Bay International Group will be headed by Karen Griffin. Griffin was formerly President of Soleil Builders, Inc a successful construction company in Tampa, FL.  She is a graduate of the University of Florida.

Given the huge opportunities for the creative sector in the USA, the Bay Group team are looking to use their experience to help Welsh firms of all sizes who seriously want to expand their international presence in this exciting and dynamic market. 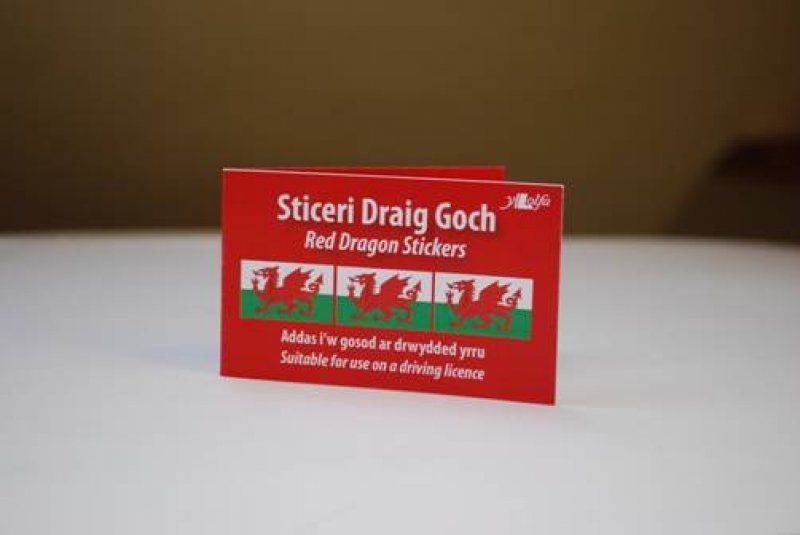 A well-known publishing company in Wales has decided to challenge the decision taken by the UK Government to include the Union Jack on new driving licenses by producing Red Dragon stickers to be placed in their place.

In 2014 the UK Government announced that the Union Jack will appear on every new drivers license from now on appearing alongside the EU banner on the licenses of drivers in Wales, Scotland and England. The decision was strongly condemned by inviduals such as the MP for Arfon, Hywel Williams from Plaid Cymru.

Over 3,000 signed the online petition but despite this the new licenses sporting the Union Jack began to appear in July 2015.

Now, Y Lolfa publishers have produced red dragon stickers that will be suitable to be place over the Union Jack.

‘We believe it is completley unfair that Britishness is being imposed upon us in this way.’ said Fflur Arwel, Y Lolfa’s head of marketing. ‘People are not given the choice to declare their nationality nor show that they are proud to be Welsh.’

Mr Parri received a response to his complaint by the DVLA which explained that the decision taken by the government in Westminster to include the Union Jack on driving licenses was ‘to strengthen national unity’.

‘My nation is Wales. If I have any feeling of ‘national unity’ it will be towards Wales not Great Britain’ Mr Parri added ‘As a free person residing in a democracy, I have the right to my own political opinion. Nobody, not even the government in London, has the right to impose a political opinion on me. And this is what they are doing by ‘strengthening national unity’ as stated in the DVLA’s response.’

Now, Mr Meurig Parry and anybody else who wishes to have the red dragon of Wales on their driver’s license can purchase the stickers produced by Y Lolfa.

The pack of six red dragon stickers is priced £2 and are available from good bookshops and Y Lolfa website www.ylolfa.com 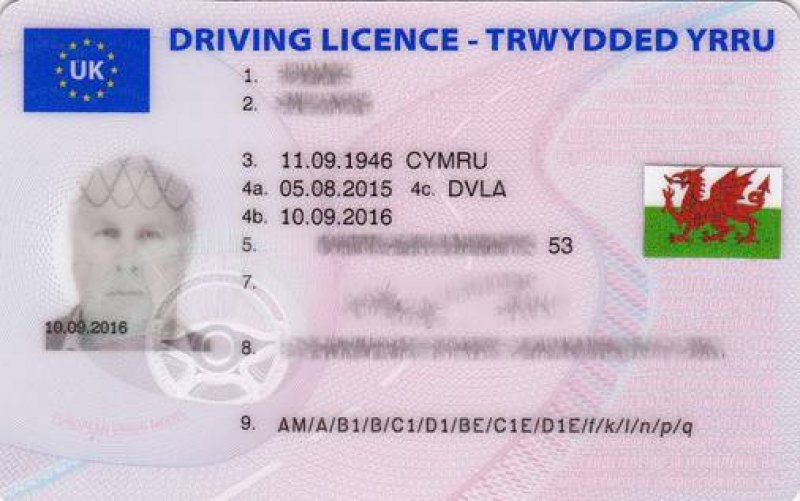 This post has been preserved for archive purposes. Most links on the page should work but some have been removed since they led to pages which have subsequently been removed.