In this video, Llywelyn travels to Wales in 2018 on a Kingdom of Wales diplomatic passport to issue a challenge to the UK after the UK Cabinet Office acquiesced (1) on the fact that Llywelyn is the true King of Britons.

The UK was unable to charge Llywelyn with fraud or having a fake passport because it is an established fact (manifesta probatione non indigent) that he is the de jure sovereign of Wales. By placing himself at risk Llywelyn was able to extract a declaratory recognition of sovereignty (2) from the UK. Any other person would have been charged with a crime for traveling on a self issued passport. The UK did not want him to have a trial, as a trial would reveal a lack of jurisdiction and expose the fact that the UK is only an acting government and not the true sovereign government of Wales.

Under international law, a government in exile has the authority to perform all normal acts of state. Including the issuing of identifications, passports, and creating treaties and alliances with other governments.

The paramount take away from this video is that the United Kingdom is not the sovereign government of Wales. Their presence in Wales is an occupation under international law (3).  The Kingdom of Wales exists in present day, entitled to all of the signs and symbols of sovereignty and independence.

(1) "Delay by an individual claimant in the presentation of a claim has at times been held to bar the right of a state to present the claim subsequently as a valid one in international law. The grounds for the refusal to allow claims under these circumstances have been variously expressed. At times the disallowance is merely stated in terms of the claimant's non-action or laches, and at other times in terms of prescription or of a limitation on international claims.”
Marjorie M. Whiteman, Damages in International Law 236 (1937)

(2) “The declaratory doctrine of recognition can be stated in simple terms. A State exists as a subject of international law-as a subject of international rights and duties-as soon as it "exists" as a fact, that is, as soon as it fulfills the conditions of statehood as laid down in international law. Recognition merely declares the existence of that fact. These propositions are regarded by the adherents of the declaratory view as self-evident.”p. 423
H. LAUTERPACHT, “Recognition of States in the International Law”, “Yale Law Journal”, Volume 53, Issue 3, Article 1,  (1944)

(3) “Occupatio bellica, or belligerent occupation, is “quintessentially a temporary state of fact arising when an invader achieves military control of a territory and administers it on a provisional basis, but has no legal entitlement to exercise the rights of the absent sovereign.” Nehal Bhuta, The Antinomies of Transformative Occupation, 16 Eur. J. Int’l L. 721, 725 (2005)”
See  Melissa Patterson, “Who’s Got the Title”, Harvard International Law Journal, Volume 47, Number 2, Summer 2006

Two Competitions & a Sale to Welcome The New Year! 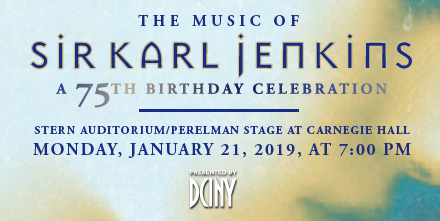 "Sir Karl Jenkins is the most performed living composer in the world."

We are extremely pleased and proud to announce that Distinguished Concerts International have made available a pair of tickets for the forthcoming Karl Jenkins concert in New York at the Stern Auditorium / Perelman Stage, Carnegie Hall on Monday, January 21st, 2019. The program includes Sir Karl Jenkins’s Symphonic Adiemus as well as Jenkins’s Stabat Mater. Read our (2010) interview with Karl Jenkins here

We are offering these tickets as a QUIZ PRIZE on Americymru!

Just answer the three easy quiz questions below ( answers can all be found on Wikipedia ) and reply with your answers to this email ( all email addresses will be deleted when the competition closes ). We'll throw all the entries in a hat and pick the winner! Please email us by Monday, January 14th, 2019 no later than 9 PM ( Pacific Time ). Tickets will be ready at will call on 1/21 at the Stern Auditorium/Perelman Stage, Carnegie Hall; the winner will just need to bring a photo ID.

Only one entry per email address is permitted. Duplicates will be disqualified. You do not need to be an AmeriCymru member or logged into the site in order to enter this competition.

If you don't win the competition, please do not despair. DCINY is very kindly offering a 30% discount code for AmeriCymru readers. The code is DCG30382 and it can be used online, over the phone, or in person at Carnegie Hall


WIN A SIGNED COPY OF 'THE MOVING OF THE WATER'!

In 'Nos Da' Private Richard Bowen is severely wounded after stepping on a land mine. He rambles, seemingly incoherently, as he recalls the details of his past life. In particular he remembers wishing his father goodnight in the happier days of his childhood.

We are pleased to announce that author David Lloyd has presented us with a signed copy of 'The Moving of the Water' for a giveaway competition. Answer the three questions below (all easy, wiki links provided) and reply, with your responses, to this email. The winner will be announced on January 31st. The competition is open for entrants worldwide and is not restricted to the USA.

1. American pioneer Daniel Boone (of Welsh ancestry) was born in which year? 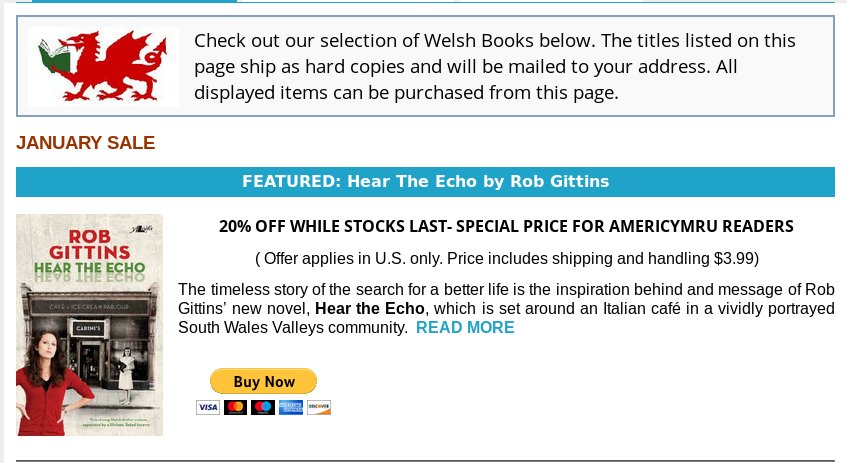 Advertise For Christmas (and all year 2019) on AmeriCymru

AmeriCymru has 4 spots available in the right hand column on ad supporting pages. These ads are $25 for a year AND we'll throw in the period between now and Christmas as well!!! We welcome ads for Welsh themed books, music, artwork and gifts BUT, please act now, time for this offer is running out.

We also have 5 $10 dollar spots on our new Christmas shopping page. If you want to advertise here to test the response, we will credit your $10 toward a full length (12 month) ad next year.  So, for a mere $15 extra you can advertise right up until next Christmas. Use the PayPal button below to reserve your spot or email americymru@gmail.com for more details.

A chuckle for all you technophiles out there. The following is an extract from a tech support ticket I opened earlier today.

But basically ALL sitebuilder pages (including existing ones) are affected similarly. When I copy code from a functioning page I usually press 'Save Changes' rather than 'Close' to shut it down. Don't know why....I just do. BUT I have noticed that perfectly good code blocks on functioning pages will not close in template code or html editor without generating the above error. Of course If I just shut the page down in the browser the page is working fine. BUT I cannot click 'Save Changes' anywhere without the syntax error message displaying. Existing pages continue to display correctly but new widgets on new pages even though they are syntactically identical to existing ones elsewhere on the site ....will not save. Hope that makes sense.

Which meant Jamroom was not able to "call itself" to test the template. I removed the IP address from the Banned Items module and I think that will fix it for you.

Let me know if that helps.

Many thanks for sorting that. Please tell me I'm not the only one

Never let it be said that we don't take security seriously here at AmeriCymru. I have posted myself on 'Clients from Hell' .

Waiting for the first UK report which says "an area roughly the size of Wales" is currently on fire in the Northwest. Thought I might help out with the calculations.

Currently the figure for Washington State is 920 sq miles which is 0.114 by the Wales-o-meter . Given that the surface area of Wales is 8016 square miles that is 11.5 in percentage terms . At 275.7 mi² that's more than 3 times the surface area of Ynys Mon/Anglesey ablaze in one state alone!!

UPDATE: In Washington and Oregon at the moment 1,052,388 acres are burning i.e. 1644.36 square miles. This figure omits Montana, Idaho and California all of which are experiencing devastating conflagrations. Given that the surface area of Wales is 8016 this means that an area 20.5% or one fifth the size of Wales is burning in those two States. 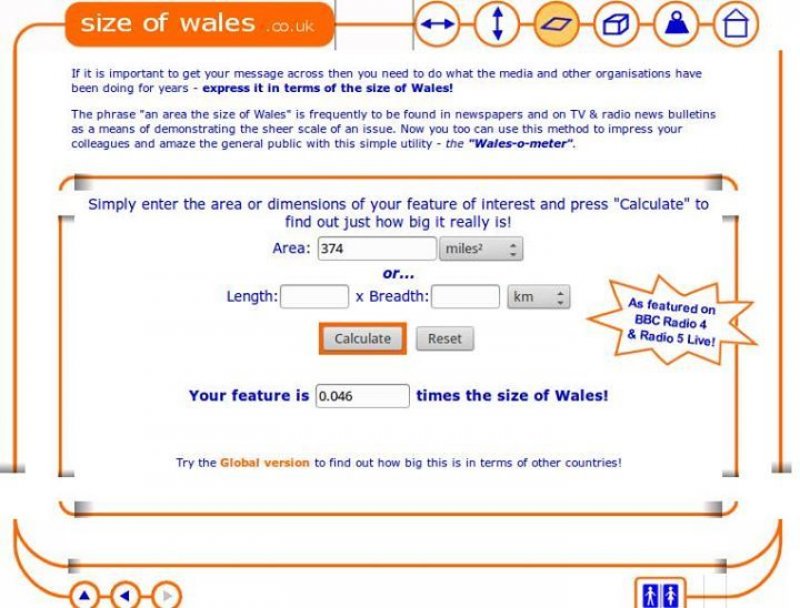 Are You A Fan of Trashy Horror Movies?

If so heres one set in Wales. Every expense is spared in this hilarious gore-fest set on a remote Welsh island. The cast comes complete with a family of rural reprobates vaguely reminiscent of the cannibalistic miscreants in "Wrong Turn". There is also a glorious scene in which a combine harvester is used to deadly effect as a weapon against the marauding aliens and yes, ....they do use the famous Wurzels tune as a musical accompaniment.From the film's website:-"Scalleum is a remote farming island off the north coast of Wales, only accessible at low tide via a causeway know as the "Devils Spine". The island is also home to an ancient stone circle known as the "Devils Teeth". This provides the sinister setting for the terrifying Alien abduction of local farm girl Cat Williams and her hitchhiker boyfriend Angelo Jones.".... more Whilst this movie is not a defining moment in the development of contemporary Welsh culture it should succeed in raising a chuckle or a guffaw.

On Monday 19th 2008 Gareth Williams addressed the masses and he spake thus:-"Ha. That William Wallace was a pussy! Big OG WOULD HAVE KICKED HIS HAGGISY ASS RIGHT BACK TO STIRLING. Dont be fooled by the Saxon/Norman propaganda machine. Owain and Elvis run a fish and chip shop in Corwen. My mate Edgar swears to it"We need evidence! Does anyone have any photographs?. ( hint, photoshop skills required ). I think there should be a prize on here for the best pic. Perhaps a jar of of "G&P's Homemade Pickled Eggs ". I hear they are a legend!