An Interview With Phil 'Boz' Evans 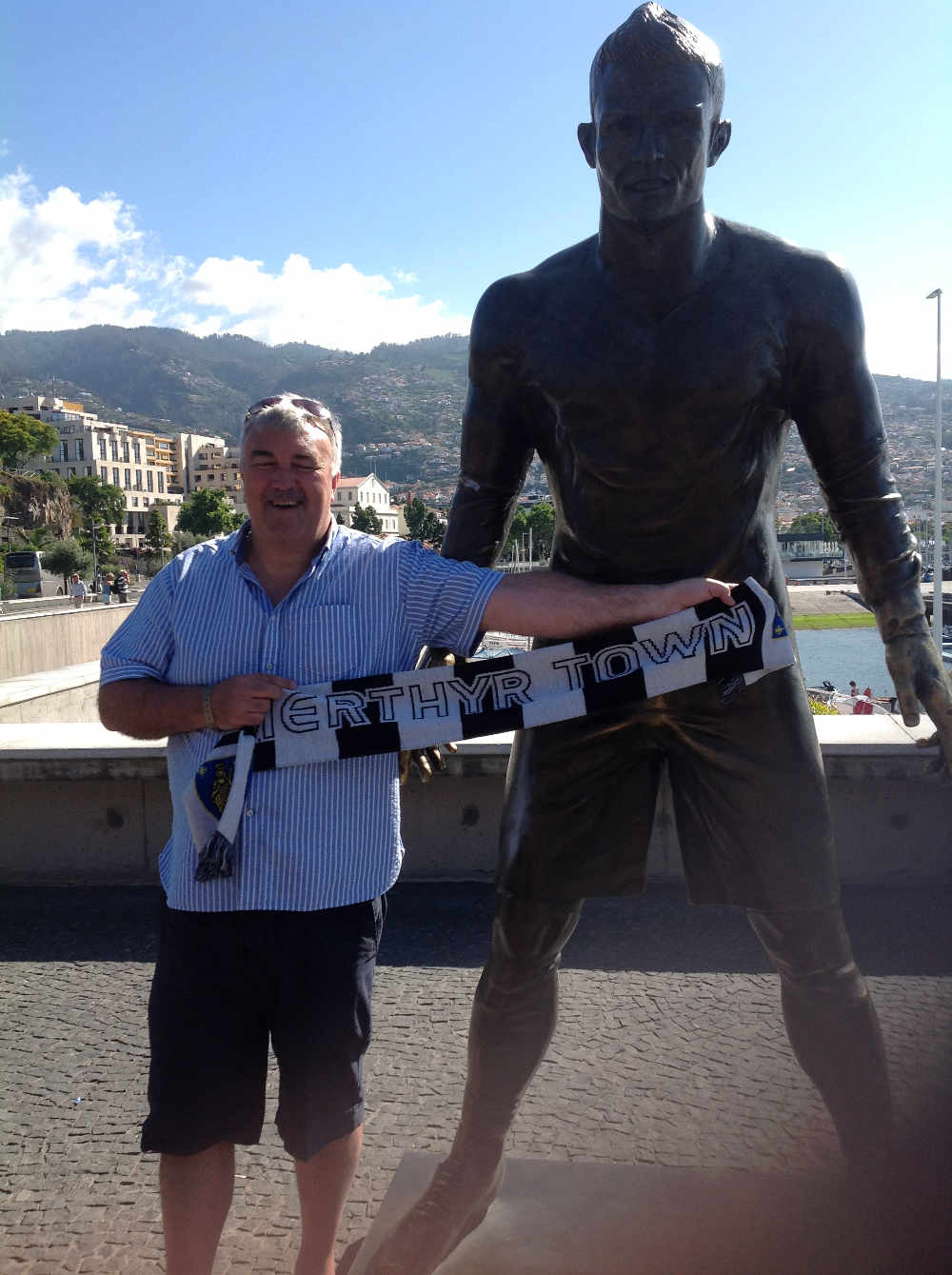 AmeriCymru: Hi Philip, and many thanks for agreeing to this interview. When did you first start writing? What inspired you to write the many tales of 'everyday' life in Merthyr that have entertained and amused many visitors to this site over the years?

Philip: A) It was around 1967 and my first writing was like the Egyptian hieroglyphics at Tutankhamun’s tomb- unfortunately it was my parent’s new wallpaper in indelible marker pen-it didn’t make any sense to anyone, but I was aged 3 and I am now 54 but I am still not making much sense.

B) The local newspaper – the Merthyr Express (the Depress)- in a backwoods Town (not backwards)- there is very little news worthy items for a reporter to produce- so I created aliases such as Lamby Davis Junior, Sue Ellen Eweing and Colt Seevers to liven up the letters page and parody the news items that were included. The first few got through but then they I was rumbled and my game was up. The local librarian, Carolyn Jacob spotted my ‘talent’ and asked me to write a story for a local book called ‘My Town’ in which professional writer Phil Caradice selected the story ‘Cliffhanger’ about Gerry Mander a disgraced MP, which I had to read out an extract in the Council Chamber- people were in stitches and the genie was out of the bottle . No matter how many times I wish he won’t go back in.

C) Inspiration is everywhere in the Valleys, Welsh people have a distinct black sense of humour- we can laugh at ourselves- something those across the bridge have extracted at birth-we have a we’ve lost until we have won-but once we have won- boy do we enjoy the moment!

AmeriCymru: A quote from one of your recent stories:- "In a recession there is only one growth industry and that is gambling and Merthyr Tydfil had been in recession for over 200 years now." Care to tell us a little more about Merthyr's recent history? Why do you think the town has fared so badly in economic and employment terms?

Philip: Alexander Cordell sums it up in one book title- ‘The Rape of the Fair Country’, Merthyr was exploited by the English Ironmasters and has been a ‘Rotten Borough’ ever since. It has been forgotten by successive Governments in Westminster – with the continual brain drain it has for the last 200 years been in perpetual recession and with capitalists preferring to take their factories and sweatshops to Asia and beyond- there is zero opportunity for the unskilled to find meaningful employment with the inevitable loss of the work ethic. Poor people chase the dream of becoming ‘scratch-card rich’ or idolise reality show ‘stars’ – it is so sad. Although conversely with the loss of heavy industry and the export of it’s unintentional by- product of pollution to China, there are echoes of Wales two Centuries ago- and a new question raises it’s head, How Green IS my Valley?

AmeriCymru: Do you write anything other than comedy? Are there any special difficulties when writing humorous stories? I guess it's essential to be funny at a bare minimum but how does the creative process differ?

Philip: A) Comedy is my bitch. I write for my own pleasure ( I laugh a lot of my own jokes) the purpose is a cathartic and once I have written the story and I have exorcised the demon of stress. Whilst my comedy shorts (not the Don Estelle ones) come and go, once I have written them they are forgotten. More recently (last 5 or so years) I write comedy football match reports on my local Non-League team, Merthyr Town, which I post on the Merthyr Town Fans Forum fortnightly, they rarely reflect the actual game but cheer people up. Opposing Teams have included my match reports in their programmes (the ultimate accolade) or retweet them to their fans- one match report was on a postponed match due to a frozen pitch but few people noticed such was their laughter.

B) Humour is very subjective- I would hate to offend any one person but I don’t agree with political correctness…for something to be funny it must be on the edge, celebrities put themselves in a position to be lampooned….but every celebrity that I have made laugh on Twitter which includes Ricky Gervais, Rob Schneider, Richard E Grant, Warwick Davis and the legendary Reg D Hunter are real good sports.

C) If I can make one person a day smile or forget their troubles then I have won. My readers in the past have complained that people think they are mad reading one of books poolside on holiday- for spontaneously bursting out in laughter- people have referred to my stories as ‘hilarious’ ‘hysterical’ , ‘zany’ and on occasion ‘pure genius’ and ‘criminal’ (Their words, not mine) - I have one even ruined one reader’s kitchen ceiling from her overweight husband reading a book in the bathtub, caused an injury off a sunbed and had a 90 year old Granny lock herself in the bedroom to finish a book in peace.

AmeriCymru: Where do you draw inspiration for the individual stories? Do they spring from overheard conversations, newspaper articles etc or are they simply inspired products of the authorial imagination?

Philip: Like my predecessor the late great Charles Dickens, I am a social commentator- I even pinched his pseudonym ‘Boz’ – he doesn’t need it as he is DEAD- just like Dickens I am a lawyer by profession- the same Dickensian characters exist today – albeit morphed into different people- inspiration comes from colourful characters- we all know them- in our minds eye, we see who we want to see in the leading role- the key is making the story almost believable – that it COULD happen – reading is the ultimate escapism and rich or poor can enjoy it in equal measures- I have been likened in style on more than occasion to Tom Sharpe (In Welsh-Dai Blunt?)- and of course a warped mind is essential.

AmeriCymru: Do you have any favorites amongst your stories or any that you are particularly proud of? If so , which ones.

Philip: The Ex-Files (My Boss gets caught dogging), Mass Murder (A Catholic Priest goes nuts), Chariots on Fire (Millenium Edition) – the only time you are allowed to be legally racist in Wales- the Wales v England Rugby Match-I particularly loved this one as BBC Comedian and genius Boyd Clack of High Hopes & Satellite City Fame did me the honour of reading it aloud in a local Rhymney Brewery public house- the Winchester- just like the beer and the tale he is pure class, - Big Top ( A local disabled child runs away to the circus) , A Knight at the Museum (Rolf Harris’ painting comes alive at Cyfarthfa Castle Art Gallery) and the ‘Raj Quartet’- four stories about the Royal Family – Harry’s Game (Set in Afghanistan) , Stuck Up – a Prince is Born at the Queen Camilla Hospital- The Royal Wee (HM stuck in a lift) and How Very Troll (Twitter gets a Royal Assent)- unlike Sir Rolf or Sir Jimi I am not likely to get a knighthood.

AmeriCymru: How many stories have you written in total and where can the connoisseur go to read them all?

Philip: Last Count 223 complete – one in its embryonic stages- they are only a limited edition- I produce five of each volume purely for close friends- the only places to go will be the Americymru Website and occasionally on the Merthyr Town Fc Fans Forum.

AmeriCymru: Do you have any publications currently available? Do you plan to publish in the future?

Philip: No- I had a free venture with a book called ‘The Hills have Dai’s’ a few years ago – on a ‘vanity’ publishing company based in Austria- it outsold Mein Kampf but it struggled a bit. I plan to publish Volume 45 called ‘Obese City’ for my friends in Wales and the ex-pats across the Pond. Past volumes have reached Italy, Australia and Canada and Rheola market, Neath Car Boot Sale- one day I hope to emulate JRR Hartley – I wonder if Fly Fishing is still an offence.

Philip: In Merthyr, our perceived life expectancy is shorter than Sierra Leone (Source: the Sun newspaper) , if a Tydfilian reaches 50 years of age we get a telegram from the Queen- so the message is don’t buy the Sun ….oh and that life’s too short not to laugh- and thanks to Ceri Shaw and Gaabi on Americymru, the World can now laugh with you.