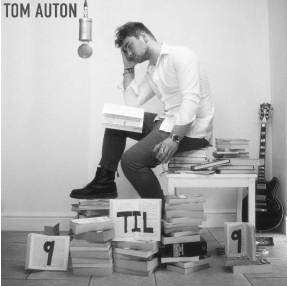 ‘Tom Auton has arrived and isn’t going anywhere but up.’ - New Sound Wales

Tom Auton follows up to the much-adored Victim of the Groove, with a brand new single 9 til 9 which is  OUT on Friday 28 May 2021 on all major streaming/download platforms.

Sonically, Tom delivers with another slab of thicc filthy bass to gurn your face, high energy and heavy blues riffs; all woven with Tom’s signature disco groove woven throughout to make your feet want to dance and take you to giddying heights. 9 til 9 was recorded at Longwave Studios, Cardiff, produced  and mixed by ‘one-man wonder’ Tom himself, and mastered by Eddie Al-Shakarchi aka Ed Boogie (Buzzard Buzzard Buzzard, Boy Azooga) . Following on from the success of previous single Victim of the Groove, 2021 is shaping up to be a big year for Tom, with his first show back being with legendary Welsh indie-rockers band Feeder. Tom will open the huge outdoor show at Tredegar Park, Newport on Friday 9 July with his band The Bottlebreakers. Tickets are available HERE . The Cardiff based musician and his band also paid homage to one of their inspirations Royal Blood with their cover of Typhoons, which gained a seal of approval from Royal Blood themselves!

9 til 9 delves even deeper into Tom’s experience and struggles of being a self-releasing indie artist, the creative process and the theme of mental reliance.

“The Lyric ‘9 Til 9’ refers to a full 12 hour day that I spent analysing a song I had written. Trying to make it fit someone else’s idea of “the perfect song.”

“This song is about rejection and how I deal with it. For me, getting turned down from an opportunity or a job, and not getting feedback as to what you did wrong, sends me falling into an over analytical pit of ‘what did I do wrong’. So I wrote 9 Til 9 to rid my mind all of these questions that I conjure after getting turned down.” explains Tom.

Tom tells the story of ripping himself apart to gain approval from an unforgiving music industry with lyrics ‘now I’ve changed my clothes can I breathe your air?’ but rather than dwell for too long he channels this negative energy into his music and works around the clock to create his fresh sounding and incredibly catchy disco infused blues-rock anthems.

As Tom puts it “It can consume me to the point of wanting to change who I am, It’s a bit dark and gloomy, but I find writing about it makes for some really aggressive riffs. Every song of mine is born from anger and frustration, at things that have gone wrong in my life. The songs highlight the internal conflict I face with myself daily.

” In spite of lock downs hitting the music industry hard, Tom is living the true rock and roll dream; producing his own rock and blues records at the age of 21 from his own studio ‘The Syncopation Station’ (his parent’s living room). Tom’s produces and co-writes with a number of artists including Dan Owen, John Adams, Amber Leigh Irish and The Voice’s Chanel Yates & Jake O’Neil.

“Producing gave me the chance to make the most out of a bad situation and throw myself into my production work. I’ve been working 6 days a week since the start of lock down, mostly over zoom, on a plethora of new music from the artists that I work with. This has definitely helped to keep me sane.” says Tom.

Pre-Global pandemic, Tom was receiving critical success on his previous records with Mother Mary being added to one of the most prestigious playlists on Spotify All New Rock, BBC Introducing’s Adam Walton calling him “An Incredible Talent” and David Owens, South Wales Echo claiming “Everything Tom touches turns to Gold”

9 til 9 will be released on Friday 28 May on all major streaming/download platforms.