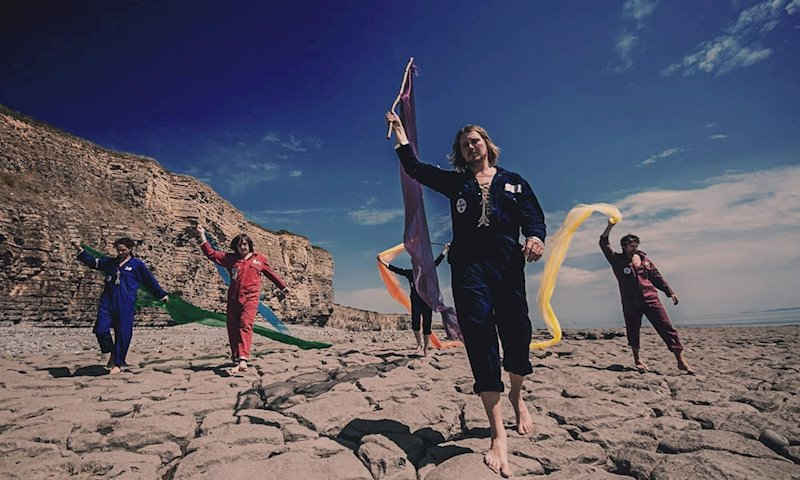 It’s been 10 years since Little Arrow emerged with their debut album, ‘Music, Masks & Poems’ way back in 2011. In marking this monumental milestone, we also celebrate the life and music of frontman, William Hughes, who we sadly lost to cancer in December 2018.

The release charts some of the many aspects of Will’s artistic life with a ‘Words & Art’ booklet showcasing his sculptures and lyrics; all accompanying the heavyweight, marbled blue vinyl of music. The digital reissue will also include bonus live recordings spanning Little Arrow’s career alongside interpretations of the album tracks re-recorded by some of Will’s closest friends. The first of these bonus tracks to be released is a live performance from Four Bars, Cardiff, in 2014. The track stands as a juxtaposition between the folk roots of the album version and the final live lineup of Little Arrow.

“From the tranquil opening of ‘Bitten Blues’ to the vivid imagery in ‘Aeroplane’; the lyrics felt old-worldly but familiar. Full of hope, but tragic. Wetting its toes amongst the mayhem, as Will puts it in ‘Poetically Diseased’. It was intimate, strange and personal yet somehow relatable, as though it talked of your pain and your joy, all through metaphors nearly lost to time. ‘Easy Now’ and ‘Beneath the True Blue’ were haunting and heart-breaking. ‘People of the Volcano’, ‘Boat’ and ‘Poetically Diseased’ were optimistic but borne of that same curious cloth. To this day, it remains my favourite part of Will’s back catalogue.”

All proceeds from the album will be donated to Paul Sartori - Hospice at Home.