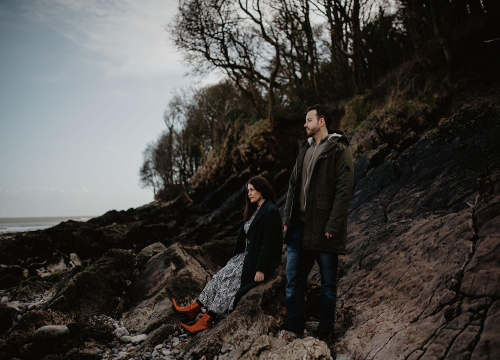 Derw’s debut single ‘Dau Gam’ is coming out on 1st May on CEG Records. Influenced by chamber pop bands like The National and Elbow, the track deals with how to find peace within yourself and what it’s like to sometimes feel like a stranger in your own mind.

Cardiff based Derw was started by songwriter Dafydd Dabson and his mother, lyricist Anna Georgina, after they got to the final round of Can i Gymru in 2018 and decided they would like to keep writing together. Fronted by Welsh/Iranian vocalist Elin Fouladi their debut EP ‘Yr Unig Rhai Sy’n Cofio’ will be released later in 2020 and features contributions from musicians from Welsh acts Zervas and Pepper, Afrocluster and Codewalkers.

Named after Anna’s father, Derwas, the band have a strong connection with the past and their family history. Full of interesting stories, the intention of ‘Yr Unig Rhai Sy’n Cofio’ is to make sure they are remembered.

Derw started as a project between songwriter Dafydd Dabson and his mum Anna Georgina, a lyricist, after they got to the final of S4C songwriting competition Can i Gymru in 2018 and decided to keep writing together. The band is fronted by Welsh/Iranian singer Elin Fouladi and their debut EP 'Yr Unig Rhai Sy'n Cofio' involves musicians from Welsh acts Zervas and Pepper, Afrocluster and Codewalkers.

Drawing on chamber pop influences like The National and Elbow, the band has a strong connection with the past and their family history and is named after Anna's father - Derwas. Their family is full of interesting stories and 'Yr Unig Rhai Sy'n Cofio' (The Only Ones Who Remember) is about making sure these stories are documented, recorded and remembered.

The track 'Mikhail' is about a friend Derwas met while studying in Jerusalem in 1926. Mikhail grew up in Russia and his father was part of the imperial navy. One night in 1917, when Mikhail was nine and his mother was away, the Bolsheviks came to his house, took his father into another room and shot him. Mikhail then moved to Palestine with his mother and, when he was 19, met Derwas, a studentfrom Oxford. They then spent years exploring the wilderness together and trying to find peace.

The lyrics for 'Silver', the final track of the EP, are taken from a poem written by Anna's mother in the 1930s. She loved writing and had notebooks full of poetry she'd written. She tried several times to get them published but never managed it so it gives Anna and Dafydd a huge amount of pleasure to be able to make use of one of them now. Their debut single ‘Dau Gam’ is coming out on CEG Recordson May 1st.