Scratching The Surface - An Interview With Welsh Poet, Dave Lewis

AmeriCymru: Hi Dave and many thanks for agreeing to this interview. Care to tell us a little about your Welsh background and how it affects your writing?

Dave: Hi Ceri, thanks for having me as it were J.  I grew up in the small, ex-mining village of Cilfynydd, which is just up the road from Pontypridd in south Wales. As a child I loved the Greek classics / stories and started reading Wordsworth, Coleridge, Pope and Milton in school, before moving on to William Blake, Brian Patten and T. S. Eliot whilst at college. I studied zoology at Cardiff University but always loved poetry and literature. After years as a biology, science and PE teacher in various schools in Wales, as well as a year in Kenya, I retrained as a software engineer and started lecturing photography and Photoshop to adults. I’d always written so encouraged by Welsh writer and environmentalist John Evans I began to think about producing my own books –  www.david-lewis.co.uk

I produced my first poetry collection, Layer Cake, in 2009. The poems were collected from many years of writing and dealt with my Welsh upbringing, family, love, nature and travel. I won a runner-up spot in a short story contest a year or so later and included that in my second book, Urban Birdsong. After selling a few hundred copies (almost all just locally) I decided that maybe I could do this. I’ve since gone on to produce a number of books, twenty to date; featuring poetry, crime thrillers set in Wales, cycling travelogues, self-help and photography.

My cycling diary, Wales Trails –  www.wales-trails.co.uk  is an account of two weeks in 2016 when I cycled around my home country and my thoughts about the anglification of Wales as well as my efforts to inspire other cyclists to do a similar ride. Apart from my novels this book is probably my best seller.

I think that being brought up in Wales, especially in years past, will always make a lasting impression on someone and this is certainly true for my own writing. I always feel we are the underdog, have this big imposing neighbour and have to fight to be heard. My poetry certainly has this anger or at the very least a sense of injustice in it although my love of the natural world is always close by so that I can retreat and disappear when the modern, technological world becomes too overbearing.

AmeriCymru: When did you first decide to write poetry?

Dave: I was about nine or ten years old when I first started writing what I thought were ‘songs’, which I later discovered were poems (I’m not very musical, lol). By about fifteen or sixteen I was into Dylan Thomas, John Keats, then Shelley but still get excited today when I discover a new poet that I like. I love the way different writers deal with different subjects and have a huge list of poet heroes! Since starting writing seriously I have been inspired by many of the American ‘beat’ poets, Ginsberg, Kerouac and one of my favourites, Gary Snyder. My ever-growing ‘poetry shelves’ also include Akhmatova, Kavanagh, Basho, Sandburg, Bukowski and Sexton so you’re never short of something to read in my house!

Some poets can write to order. They can be given a subject and off they go. I find that very difficult, if not impossible. I tend to write when I feel like, when something has inspired, upset or moved me. Some poems just rush out onto the paper in five minutes and are fine, others take weeks of editing and are never quite right. It’s a weird profession alright J.

AmeriCymru: What can you tell us about your new collection:- 'Scratching the Surface'?

Dave: Following on from ‘Going Off Grid‘ (which began with a modern ‘The Waste Land’-type rant before the other poems deal with fighting back against digital capitalism through getting closer to nature) in ‘Scratching The Surface’ I’ve returned to themes I’m comfortable with, namely nature, love and family but have also tried to slide a few left field observations in there too. As well as some very personal pieces I’ve also tried to write a contemporary collection that pushes the door open on some of today’s accepted myths.

In my view, poets should constantly question authority and not blindly give in to the mainstream, politically correct narrative. I’m often very worried about the negative direction the western world is taking and feel someone needs to speak up on behalf of the voiceless masses as loud minorities take over. Politics these days is so polarised, we’re all expected to be either one thing or the other, either left wing or right wing. How stupid is this? I am Che Guevara as far as equal opportunities, working men’s rights and access to our national health service is concerned but I’m Thatcher, Hitler or Mao on punishment for terrorists or paedophiles. I want to reduce the Earth’s population, save the rainforests and everything in them but also abolish poverty in third world countries. I could go on but what I’m suggesting is that we all have different views on different things. We can’t all agree of course but neither should we be silenced from expressing an opinion. I’d like to think my poetry asks questions (often uncomfortable) as well as provides solutions to some of the world’s problems.

One of the best things about this collection though is when I plucked up the courage to ask one of my heroes to take a peek at some of the poems in it and I got the following quote back from him. I was well chuffed!

“The poems are sharp, clear, and confident.  He has a clarity only a real poet possesses.” –  Brian Patten

Another local writer has also summed up what the book is about, far better than I can, lol:

“An epic collage of nature, history, love, adventure and grief that leaps off the page and thumps you in the chest. This book is a sheer Tardis of themes with poems about Celtic mythology, the African bush, ‘The Matrix’, the Notre Dame fire and the lives of Ho Chi Minh and Kathleen Mary Drew-Baker. Others involve close family members, ex-lovers, an abused porn star, a transgender cousin and the constant struggle with mental health issues. This collection ebbs and flows as mesmerically as a river on its journey to the sea. An absolutely superb collection of modern poetry by one of the most under the radar poets in Wales and the UK. A fluid and heartfelt abstraction that speaks loudly to the passion that should run through all of us.” –  Mark Davies

AmeriCymru: You also run the annual Welsh Poetry Competition online. Care to tell us a little about this? When is the next contest?

Dave: After talking with John Evans in his creative writing classes I setup the International Welsh Poetry Competition in 2007. We are the biggest poetry competition in Wales and growing each year. Truly international in nature we have had entries from over thirty countries and have a great reputation for honest, hard-hitting and passionate work. There are some great contests out there but there are also some very poor ones. All I can say is that the Welsh Poetry Competition is at least trying to bring serious topics to the attention of its readers. We are anonymous, our judges read all the poems and I’ve also produced two anthologies of winners’ work. The next contest will be Feb / March 2020, more details here:  www.welshpoetry.co.uk 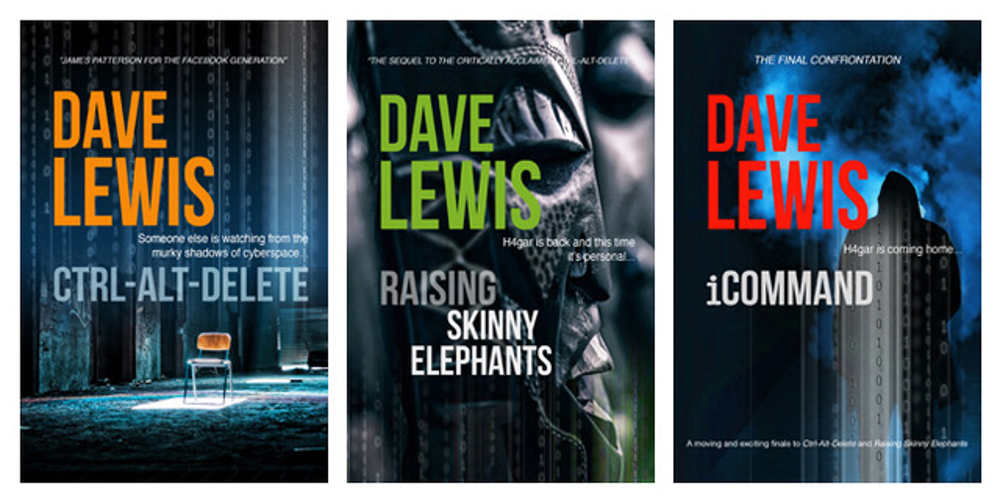 AmeriCymru: You have also written a number of thrillers. What can you tell us about the 'Hagar Trilogy'?

Dave: I had an idea for two crime thrillers, set in Wales and Africa, wrote them and never intended to have a third instalment. However after selling a few thousand copies (on kindle) and with loads of people asking ‘When is the next one out?’ I decided to write a third. The story involves a politically-incorrect Welsh valley hero, his haphazard love life and a serial killer who becomes entangled in his life. A host of very different characters eventually connect as we discover who the killer is (although I never intended it to be a whodunit) and further twists in the relationships come to light in the second and third books. The sequel and final book seek to explain why things are happening and to question the reader - do they have sympathy with the killer or not? I took seven years to research and write them, mainly down to the IT information contained within. I also have an idea for a fourth novel in the series but that might be a while yet…

AmeriCymru: You run a book publishing company - Publish & Print. What kind of books do you publish? How would prospective authors get in touch with you?

Dave: Unfortunately the book publishing scene is quite poor in Wales. There are just a handful of very small book publishers producing a small number of books each year with not much appetite for risk, so the more adventurous or innovative writers fail to get noticed in my opinion. I thought I could offer an alternative so after self publishing my own books I decided to start the company. I offer this service to other writers (worldwide) and now work full-time on this and as a writer myself. The business publishes all sorts of genres although I like to do poetry of course and feel I offer a professional service at a reasonable price. There is plenty of free information for prospective authors on our website and an authors page where you can see what we produce. We have some great writers on board too, for example the Welsh thriller writer Sally Spedding. All books are available on Amazon but start here:  www.publishandprint.co.uk

Dave: There used to be an A to Z database in Wales, which included details on many Welsh connected authors but it disappeared a few years back. Many writers in Wales have complained about this so I decided what the heck, I’ll just do one myself. I’ve not long started it and still have many authors to add but it’s well worth a look already –  www.welshwriters.co.uk

AmeriCymru: What's next for Dave Lewis? Any new titles in the works?

Dave: I’m writing a novel based in Wales and London at the moment. It’s about a Welsh lad from a broken home who starts out as a bouncer in Cardiff before moving up to London and ending up working for a crime boss in the city. When things go bad he goes on the run and flees back to Wales. It’s quite a hard-hitting book with a fair bit of violence under the surface but the story is really more concerned with the relationships between the different characters. It’s quite a dark novel.

I’ve also been asked to do a ‘Selected Poems’ collection by a few people although I haven’t really thought about a traditional publisher as yet. It’s very competitive to get a poetry book produced by anyone in the UK so I’ll probably do one myself, maybe the end of next year as I have a fair amount of varied material to include now.

Dave: Apart from buy all my books and leave lots of 5 star reviews, lol, I’d like to see more people getting involved with the site. Wales is a poor country, abandoned by governments in England and we need you ‘Cymro-Americans’ to support and speak up for us as we fight a daily battle against the forces of evil over here. (I’m hoping to appeal to Star Wars / Lord of the Rings fans with that line btw). Hwyl.