COMPREHENSIVE HISTORY OF WELSH HYMNS AND SINGING “A REAL GEM” 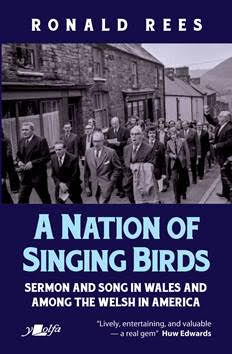 Wales is known as ‘the land of song’ and the Welsh are renowned for their love of hymns – perhaps no other nation has sung them with such fervour. This passion is celebrated in a new comprehensive history of hymn writing and singing in Wales and amongst the Welsh diaspora in North America.  A Nation of Singing Birds: Sermon and Song in Wales and Among the Welsh in America  by Ronald Rees (Y Lolfa) looks at the time between the Protestant Revivals in the late 18 th  century until the present day.

Described as “Lively, entertaining, and valuable – a real gem” by the journalist, presenter and newsreader Huw Edwards, the book considers the influences of key figures such as William Williams Pantycelyn and Ira Sankey also examines rhythmic elements in Welsh preaching.

“Two particular incidents led to the writing of this book. The most recent was my reading of Barbara Ehrenreich’s  Dancing in the Street . Her book is about the need, manifested throughout human history, for communal expressions of feeling – in dance, parade and song. The other incident was a combined concert and  cymanfa ganu  held at St David’s Hall, Cardiff about forty years ago. The concert performers were members of Rhondda’s peerless Pendyrus Choir, led by the late Glynne Jones. The singing was hair-raising. As the final repeated chorus died, a deeply moved Glynne Jones let the hall grow silent and said quietly and reverently: ‘This is who we are.’”

Painstakingly researched in libraries and archives in both Wales and America, and encompassing information from emigrant letters and diaries and local newspapers of the period, this definitive history tells how hymns and the religious movements and revivals spread via Welsh emigrants to religious communities of the USA. For example, it was a group of Welsh migrants to Utah, led by John Parry, who formed the nucleus of the famed Mormon Tabernacle Choir.

“To engage their audiences, Welsh preachers at home and in America often delivered their sermons with a discernible cadence or rhythm in which sound could be as important as meaning. By combining the persuasive power of the word with the emotive power of music, assemblies could be brought to states ranging from spiritual readiness to hysteria. In our own times there are echoes of the mesmerizing, cadenced style in the recorded speeches of Dr Martin Luther King and the poetry readings of Dylan Thomas. Thomas’s great-uncle, Gwilym Marles Thomas, was a Welsh Congregationalist minister.”

“My objective was to explore how hymns, and the religious movements and Revivals of which they were part, fired the Welsh imagination. The chapels may have emptied but hymns remain our tribal songs,” said Ronald Rees.

Born in Skewen and educated at Neath Grammar School, Ronald Rees taught historical geography at the University of Saskatchewan and, as adjunct professor, at Mount Allison University, New Brunswick. He has written books on the Canadian prairies, the Maritime provinces of Canada, garden history, and on science and industry in south Wales. He lives in St Andrews, an historic resort on the Bay of Fundy in New Brunswick.

A Nation of Singing Birds: Sermon and Song in Wales and Among the Welsh in America  by Ronald Rees (£12.99, Y Lolfa) is available now.