For Fans Of:  The Burning Hell; Half Man Half Biscuit; AJJ; The Bonzo Dog Doo Dah Band

Seven years on from its initial release, Cardiff-based Quiet Marauder are set to unleash a contemporary reimagining of their record-baiting, format-stretching debut album MEN. Cut back from its original guise of 111 tracks and nearly five hours, its sister EP, Tiny Men Parts, clocks in at a much more manageable nine songs (and just over 25 minutes). Released at the end of November, Tiny Men Parts is a celebration of Quiet Marauder’s live band over the last few years, stepping away from the lo-fi, bedroom aesthetic of their debut and embracing the bombastic rock conjured by the group as a whole.

Recorded in Rat Trap Studios with Tom Rees (Buzzard Buzzard Buzzard) at the helm, the remit was to channel the sweaty joviality of a dive bar gig - something even more poignant in the context of coronavirus. This feat was accomplished with aplomb on the punk-rock bassy, bangy scuzz of previous single Eggs! and is repeated throughout via tracks such as The Business Deal, Lucky Tonight and I Want A Moustache, Dammit. Naturally, these tracks and the EP as a whole, share the same thematic and lyrical concerns of its longer predecessor; a study in the darkness of toxic masculinity, lad banter and the insidiousness of gender inequality.

2. I Want A Moustache, Dammit

3. Roda And The Bunker

7. The Animals Are Spying On Me 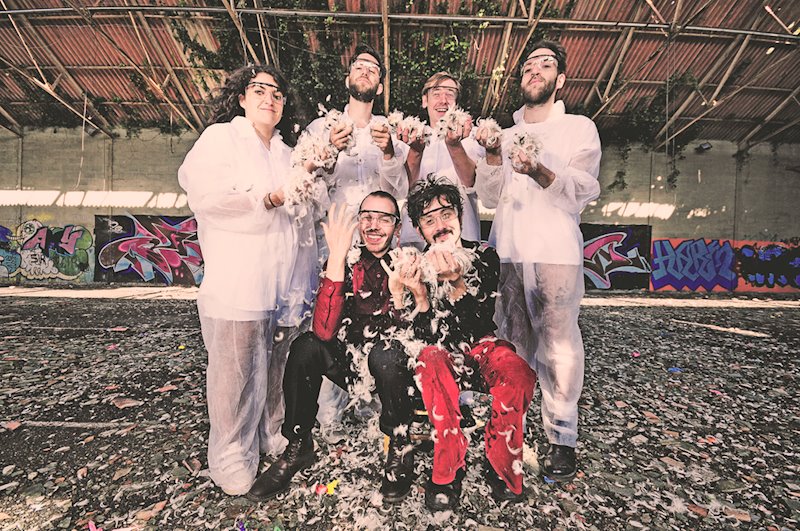 Released by Bubblewrap Collective, Tiny Men Parts will be preceded by digital single The Animals Are Spying On Me on 28th October, lyrically about human capability for irrational and yet somehow intractable paranoia. Following that the full EP will come on 27th November, arriving in limited edition heavyweight white ‘fried egg’ vinyl with accompanying ‘real man’ temporary tattoos. ...

This record is a celebration of the longest-serving live incarnation of Quiet Marauder, as well as a reimagining of our ridiculously long debut album, MEN. Way back when, seven years ago in 2013, a lot of that album was recorded by one man banging a frying pan on an inflatable mattress in the Cardiff suburbs. As fun as that was, fast-forwarding to 2020 and the tender touches of Tom Rees in Rat Trap Studios capturing our innate rock rawness was one thousand times more rewarding. Huge thanks to Tom and Ed Truckell for their tracking and mastering, Bubblewrap Collective for still indulging our whimsy and to the kind souls reading this who, we assume, have not stolen this or in the midst of destroying it...and of course, the Quiet Marauder players responsible for making the fundamental noises in the tiny grooves of this disc: ...

Many of these songs chart the darkness of masculinity and human behaviour - its lack of logic, its danger and the spectrum underlying that on which we all sit and should be conscious of. Beyond the dark, there's more often than not some light. Be and stay kind.