Roman Wales: An Interview With David Leedham , Author of 'The Bitter Sea' Part 2

AmeriCymru: Howimportant to modern historical research are the records handed downto us from the oral tradition?

David: The answer is simple. For the purposes of creating a history, fortrying to uncover the past, they are now considered irrelevant.They are important as pieces of literature, as texts, butthat is a different area of study. Indeed, people using them intheir attempt to write about the past run the risk of their workbeing dismissed out of hand, in other words, without being lookedat.

Trying to look at thevery distant past, as we are here, we first have what might becalled the primary accounts: the sparse and clearly fragmentaryversions of events in the province and then diocese of Britain fromTacitus down to, say, the Chronicle of Hydatius c .468. But then there are the many references inworks dating from roughly the sixth to the twelfth centuries,secondary sources if you will, which either directly or indirectlyrefer back to this earlier period. Much of this comes to us in theform of storytelling. The origins of this traditional material areuncertain and in its extant form it almost always reveals evidenceof editing, re-writing, and addition, and yes, the determination to invent a past, or bits of that past, about which in allprobability not very much was known, is obvious.

The New History approachto what might be the vitally important issue of oraltransmission is to set it on one side as being a process beyond anyhope of recovery. Although all accept the importance of oraltransmission as a method of preserving and handing on knowledge inthe first centuries of the Christian era, by the time we reach thefourth and fifth centuries, in the world of the New History, weamazingly encounter deep scepticism amounting to outrightrejection.

Modern deconstructionismhas unseated the old opinion which was content to accept that oraltradition provided the link between the Christian era, when thismaterial was written down, and the earlier centuries. To scrambleafter hints of a dimly perceived past handed on by an oraltradition which cannot be traced, and which anyway would have beenfinally mangled in a recording by monastic scribes centuries lateris, so we are told, a complete waste of time. Even if this wasattempted, and painstaking analysis did manage to winkle out a fewfacts worth considering, we would still lack the wherewithal to putthese together.

But the issue of oraltransmission cannot be so lightly dismissed. Did the skillsand capacities of those whose responsibility it was to pass on apeoples history, ruling genealogies, stories, and poetry in theage before writing was introduced simply wither and die in the faceof Christianitys seemingly inexorable advance? Are we expected todismiss from our minds the graphic descriptions of how all this wascommitted to memory given us by Caesar and other ancient writers?No, the claim has to be made that this vast corpus of what iscalled traditional material is still worthy ofconsideration, especially when it appears to echo what we can gleanwith far greater certainty from other sources for these times whenalmost every approach and lateral viewpoint has to beutilized.


AmeriCymru: To what extent would you agree that history is partscience and part art?

David: Iwould agree totally. In the first instance, History is story. No one is more surprised than this writer at the lengths towhich it seems necessary to go in order to make one small plea forthe continued importance or utility of storytelling as part of theeffort to understand our past, the word story being used here inits old-fashioned sense of a recital of events intended to interestthe hearer or reader. There is no call here to abandon the diggingor the study of our texts. All that is being argued for is aplurality of approach, and what could be more postmodern thanthat?

The end result of thisapproach, the attempt at a narrative history given in these fivebooks, is offered not as fact, as certainty, or even as a set ofpropositions which can be supported by independently vouchsafedevidence. Attempts have been made to write such minimalisthistories, but they lack conviction. Instead, what is being offeredis a construct, a model, or rather a whole series of these, whichseem to fit the evidence as it now stands. Whilst appearingsomewhat old-fashioned in its approach, what follows is insteadvery much a product of our postmodern era. This is not to excusethe lamentable populist postmodernism where evidence can beignored, all can have their say, and Jack is as good as his master.The evidence is still crucial, but the way we assemble it can neverbe other than as a theory or hypothesis.

We know so little aboutearly British history under Rome that we will never, repeat never be able to come up with anything other than guesses,constructs, and models for what then occurred. Realizing this, wecan liberate ourselves from the straitjacket imposed by the recentapproaches to early history we have looked at, for they arethemselves based on a false certainty that minute and painstakingresearch in all sorts of remote areas will one day add up tosomething called History. As one writer on the postmodern askedrecently, are not possibilities preferable to certainties that areharmful and misleading? 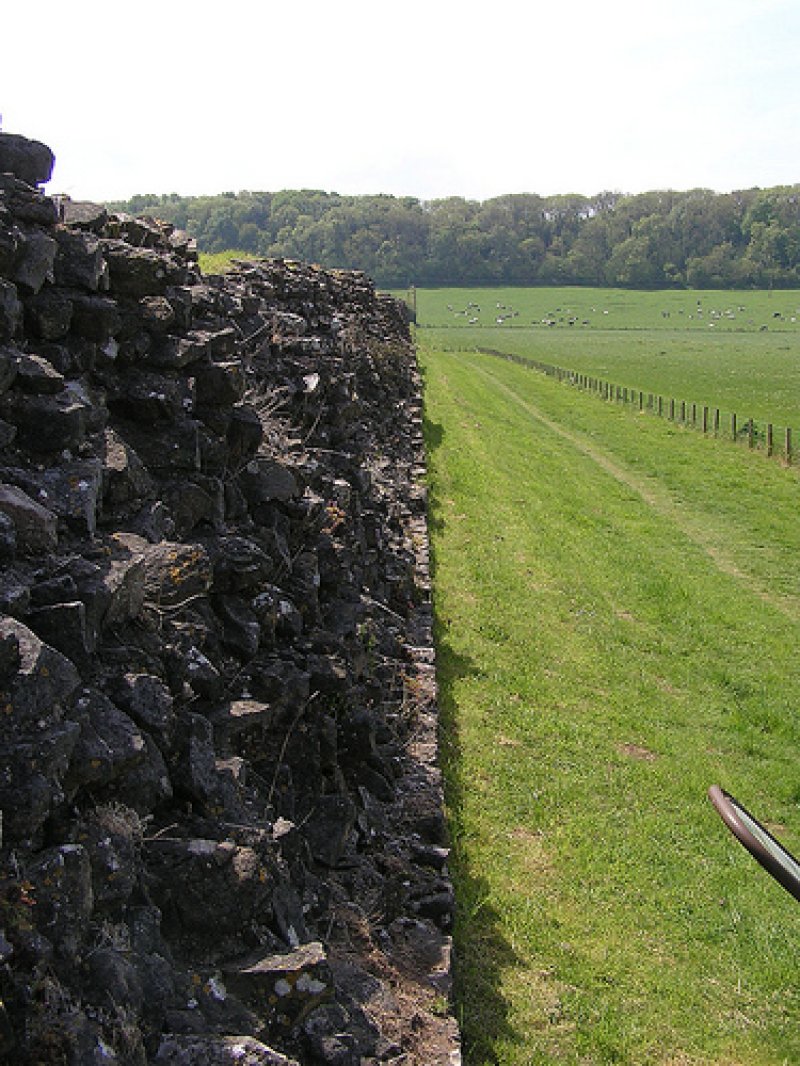 David: What I am trying to offer is a narrative account of the Romanperiod in the British Isles: enshrining the concept of chronology,giving seemingly specific dates to events and people; linking thesetogether to produce quite extensive constructs as to what may havehappened, and using traditional material where this seems to illustrate or help the argument. If this was notaudacious enough, a controversial claim is made concerning Romesinterest in Ireland. This is that Ireland was always in theforefront of military thinking for the administration inBritain.

I describe the books asbeing both accessible and polemical. I have touched on thecontroversial approach. Worse, as some would see it, despiteseemingly doubtful and threadbare evidence, it is suggested thatRome made two military interventions in Ireland, in 175 and 217.Much later than these, it is argued that Niall of the Nine Hostagesand Conall the Red, two of the greatest figures in the earlyhistory of Ireland, can be seen as mere agents of what was still anessentially Roman administration in Britain in the yearsimmediately after 410. In this way the foundations of politicallife in Ireland were laid by Rome as surely as was the case forBritain itself.

I try to show how thedefence of the road system which had been so necessary for theadvancing conquest, became in effect a liability in the later yearswhen manpower for defence was so limited, but that system had to bekept open. It was out of military appointments made to ensure thishappened that we find the origins of the political systems thatcame together to form Wales. The last three books concentrate onthis.

For those who enjoybiography, Book Three looks at the life and reign of the mostfamous usurper Britain produced, Magnus Maximus, the MacsenWledig in the Welsh tales known as the Mabinogion . Hewas western emperor 38388. Book Four concentrates on the dictatorVortigern who returned Britain to army rule as in the days of theconquest in order to cope with the crisis following EmperorHonoriuss 410 decision to let Britain shift for itself. Part ofhis work and one of the most lasting, was to begin the processwhereby the great mid-Wales kingdom of Powys emerged.

The last book in theseries looks in detail at how the military appointment to a northWales command of a man named Paternus led to the emergence ofGwynedd, one of the three most powerful states of medieval Wales,and one that did more than any other Welsh kingdom to foster theidea of a united Wales. Gwynedd was acutely aware of its Romanpast, nowhere better seen than in its emblem, now the Welsh flag the red dragon of the Roman cohorts. When Edward I conqueredGwynedd in 1283 he was not only completing the Norman conquest ofBritain south of Hadrians Wall. He was also recreating the Romanprovince. His great imperial HQ in Wales, Caernarfon Castle is, asI try to stress, paradoxically the supreme testimony to Gwyneddsachievement and history, an embodiment in stone of all that Gwyneddhad fought for.

AmeriCymru Canyou tell us where our readers can purchase your booksonline?

David: Will you really buy all five? It would be wonderful if you did, notbecause of financial considerations, but because of my ambition toshare these ideas and extend the knowledge of how Wales came intobeing. If you are thinking of buying just one, I would recommendVol. Five, In Defence of the Empire, Roman Gwynedd 3981301 ,[no, that is not a typo!]. If your roots are from mid Wales, VolumeFour, but to see how Wales became the focus of attention because offears about Ireland start with Book One. But go on! Buy the lot!And if you know academics who are interested in early Britishhistory, challenge them!

IRELAND AND THE ROMAN CONQUEST OF BRITAIN,43224

2IMPERIUM ROMAN BRITAIN AND IRELAND THE MAINTENANCE OF CONTROL,225367


3 BORN FOR THEGOOD OF THE STATE

07/10/11 09:37:12PM @gaabi:
Wow, that sounds fantastic, I don't know which one I want to read first! I'd never thought about the Roman road system as a liability or what it would have cost to try to keep it as the empire receded or read anything about Rome and Ireland. What an incredible undertaking and I definitely want to read them all.


Too bad the later written records of earlier oral tradition histories (such as they exist) are not given better treatment, eh? Seems a bit intellectually dishonest, and perhaps speaks to "history" being easier to write if one doesn't have to think, but only has to find new ways to say what others before have said, because "it is written." Back to the idea that history is written by the victors: I have read some perspectives on Roman Wales that implied that some of the country was controlled by the Roman forces, but these were largely confined to the forts as the local Celts would be in control of the countryside. Will your books talk about these differing viewpoints (how much Rome really held sway in Wales)? Also there is this little matter of the Romans and the druids at Anglesey... do your books cover anything like the cultural interplay between Roman and Celtic societies, beliefs, and so forth? Anyway, you are to be congratulated in advance for attempting this entire subject. Good thing you had nothing else to do.