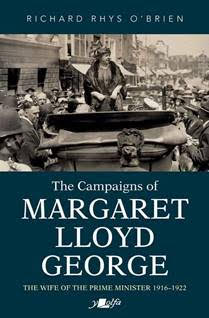 From the end of the First World War in November 1918 until the fall of the last Liberal-led government in October 1922, Margaret Lloyd George, wife of David Lloyd George, “the Man who Won the War”, pursued an unprecedented series of political campaigns between all compass points of England and Wales. It was unprecedented for a “First Lady” to campaign on the political hustings, except in their husband’s own constituency. By and large, it has never been repeated in this manner.

The book draws on an unpublished treasure trove of speeches, notes and correspondence, in her hand and in the hand of her private secretary, the Rev. J. T. Rhys (grandfather of the book’s author, Richard Rhys O’Brien), and others. The political campaigning began with her whirlwind two weeks during the controversial December 1918 general election, on one Saturday travelling 95 miles across South Wales, seeing 20,000 people, addressing 10 meetings – four in the open air – speaking in English and Welsh-  in four different constituencies.

Over the next four years she campaigned in as many by-elections as was practicable. For example, in 1919 she addressed large crowds in Plymouth on the eve of the election of Nancy Astor, the first woman to take her seat in the House of Commons. In February 1921 her campaigning tipped the scales in favour of Lloyd George’s Liberal candidate against the Asquithian Liberal in the Cardiganshire by-election, an election that widened the rift in the Liberal Party. In July 1922 she swept through the South West, from Bristol to Redruth, returning to Downing Street to petition her husband on behalf of the Cornish tin miners.

This was a time of seismic shifts in British politics, as the Liberals feuded and as the Labour Party edged towards their eventual first government in 1924.

The time was right for her interventions: in 1918 women for the first time had gained the vote. Furthermore, her husband, as soon as the November 1918 Armistice was signed, was plunged into negotiating the peace, culminating in the controversial Versailles Treaty in July 1919. Thereon he was focused on rebuilding the country, build “homes for heroes” and dealing with increasing industrial strife as the economy slowly recovered. His wife took his message around the country.

Alongside her political activities Mrs Lloyd George continued her humanitarian campaigns, for education, for women’s rights, for temperance, for new hospitals for the war casualties, for pensions for the soldiers and sailors, all following on from her wartime campaigns for the troops, for which she was made a Dame in 1920. Known thereon as Dame Margaret, she nonetheless generally preferred the simpler ‘Mrs Lloyd George’.

Aside from the good fortune of inheriting such a valuable archive, Richard has been inspired to write this story to restore the public reputation of Margaret Lloyd George, so strong a century ago, which has been largely forgotten, many merely remembering a little Welsh woman who preferred to be at home in Cricieth, North Wales and who, it is often erroneously stated, took little interest in national politics. Perhaps for good reason, no spouse of a Prime Minister has conducted such open political campaigning since the pioneering Mrs Lloyd George, though some have worked hard in the background. In his introduction Richard writes:  “The role of a Prime Minister’s partner is undefined, in theory allowing each holder of the office to fashion it at will - but minefields as well as opportunities abound. Mrs Lloyd George seized the opportunities and avoided the minefields with great skill, and while she only too often exhausted herself, she never over-reached.”

After the fall of Lloyd George from power a century ago Mrs Lloyd George continued her humanitarian work, as well as helping both her son Gwilym and her daughter Megan (the first Welsh woman at Westminster) to join their father on the back benches of the House of Commons. She died on 20th January 1941, at home in Cricieth, after a fall and subsequent illness.

The book closes with the generous comment made in 1922 by an otherwise opposing Asquithian Liberal:  “Dame Margaret is so obviously what we may all desire to be, a real good woman doing her utmost to tread worthily the path in which the fates have placed her.”

The Campaigns of Margaret Lloyd George  by Richard Rhys O'Brien is published by  Y Lolfa , on the 24th October, price £14.99.

“we can now understand rather better the remarkable work and words of this indefatigable woman whose influence has previously been underplayed.”  Angela V. John,  President of Llafur, the Welsh People’s History Society

“An important contribution to Welsh History as well as to the story of party politics in general after the First World War.”  Kenneth O. Morgan , House of Lords

“Finally, a serious study of the life and work of this remarkable woman… bringing her bright, shrewd personality to light.”  Huw Edwards , journalist and broadcaster

At 7.30 pm Thursday 27th October, Richard will address the Friends of the Lloyd George Museum, Llanystumdwy, near Cricieth, on the story of this remarkable woman.

Richard is a former international economist, scenario planner and strategist, author of  Global Financial Integration: the End of Geography , (cited as “one of two iconic books on globalisation” by Liberal Democrat Leader Vince Cable ), editor of more than a dozen books, former council member of Chatham House (the Royal Institute of International Affairs), and currently a member of the Advisory Board of  The Annual Register  on World Events. In addition to releasing six albums of his own songs, his online study  www.TheDinnerPuzzle.com  focuses on Lady Margaret Rhondda and the pioneering women of the 1930s.