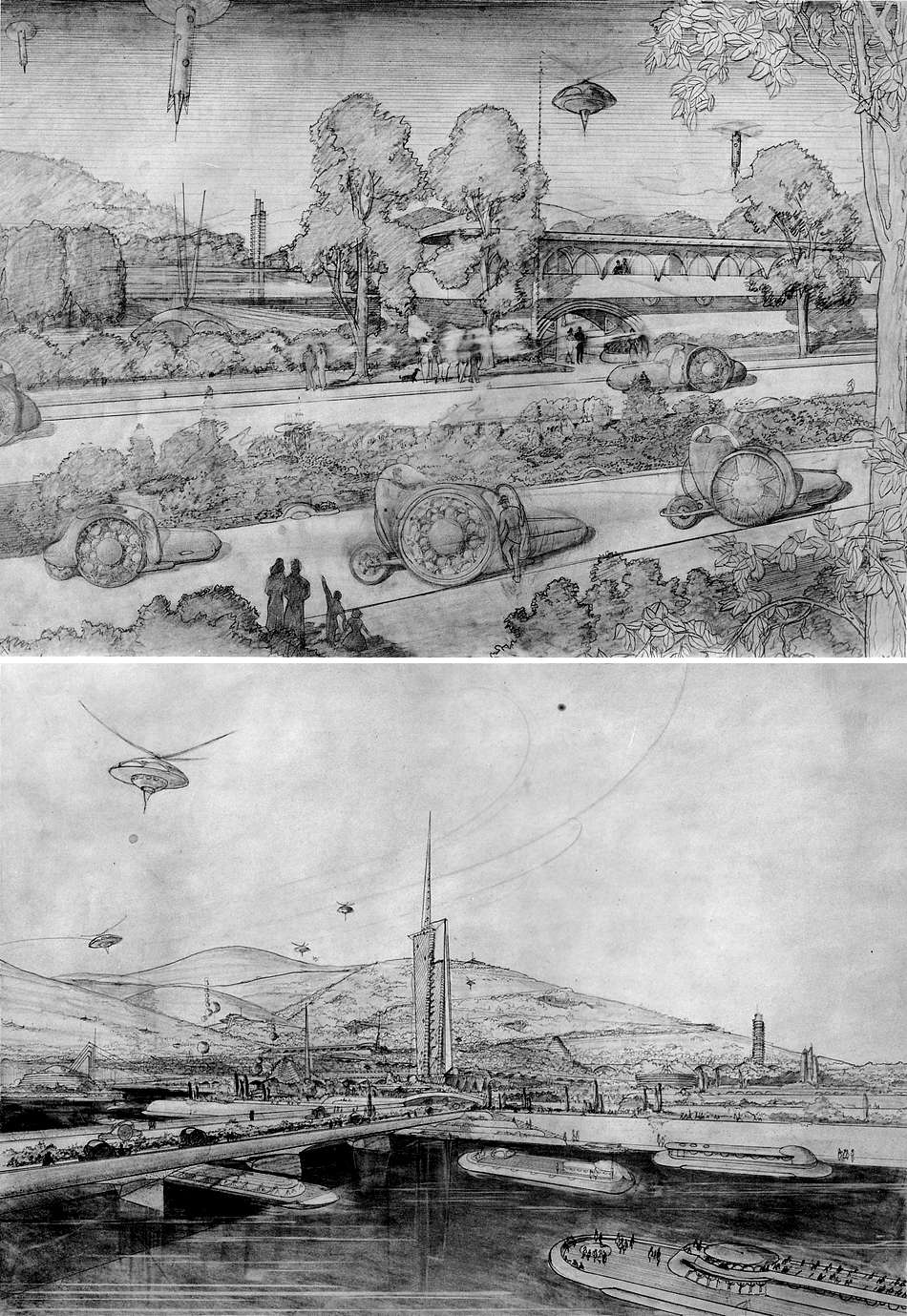 In 1958 Frank Lloyd Wright published The Living City . Appearing a year before his death the book contains his final thoughts on the subject of remaking American cities in a truly 'organic' and 'democratic' style. In its pages Wright outlines his vision for his ideal Broadacre City and many of the themes explored here had preoccupied the great architect for much of his life.

As an insight into Wright's philosophy of architecture it is invaluable. Indeed the work is part philosophical and political treatise, and part, prescription for his 'democratic' city of the future.

His plans have been dismissed as Utopian and criticised for being too auto centric but at least one commentator has recently suggested that it may be time to take a second look -  Is the world ready for Frank Lloyd Wright’s suburban utopia?

In the final part of 'Living City', Wright poses the following question:-

"Do you question the fundamental direction for American citizens of the future? Then first learn the meaning of these words:-

In issuing the above challenge, Wright clearly intends that you should acquaint yourself with his own interpretation of these terms.

Frank Lloyd Wright did not coin the phrase 'organic architecture' and he wasn't the first (or last) to use it but a number of relevant themes emerge from a consideration of his work and writing.  It is difficult to precisely define this term and it is certain that Wright's understanding of it grew and developed throughout his career. Broadly speaking, however, he was determined that his buildings should be constructed to harmonize with their surroundings in such a way that - "No house should ever be on a hill or on anything. It should be of the hill. Belonging to it. Hill and house should live together with each the happier for the other." He also preferred to build with local materials wherever possible.

Importantly he also insisted that - "The reality of the building does not consist of the roof and the walls but the space within to be lived in”. Consequently the interior space determines the exterior form and there should be a sense of space flowing through the interior rooms. The use of L-shaped designs with copious window space was also intended to blur the distinction between exterior and interior, once again enhancing the sense of space.

Wright was no fan of the American city in its present form. He regarded it as the embodiment of a form of centralisation intrinsic to modern capitalism and cursed by the burden of 'rent' which it imposes on its citizens. Wright defines various forms of 'rent' and seems to include wage labour amongst them. He wished to abolish overcrowding by building more spacious communities in which each couple would have an acre  of land, more for larger families, at their disposal in which to  practice agriculture and grow vegetables  both for their own consumption and for sale at local community markets.

Lest the above prescriptions should sound like a recipe for vastly increased suburban sprawl, albeit with bigger yards and better designed houses, it should be noted that Wright's communities would be provided with integral features like community centers, design centers and roadside markets. These would integrate, or reintegrate citizens with their local communities just as the newly designed homes would reintegrate them with their environment.. These features will be discussed later in this article.

Wright believed that architecture is, "... the logical outline, the background and framework as well as the philosophic and aesthetic center-line of any true civilisation."

Consequently he believed that it alone possessed the power to create an environment in which a true capitalist democracy could flourish. Witness the following from 'The Living City':-

"Optimistic, nonpolitical, exurban, vernal, spacious, free! All this - yes. In practical outline here is the feasible idea of organic  social democratic reconstruction of the city belonging to creative society - the living city. Abolish not only the 'tenement' and wage slavery but create true capitalism. The only possible capitalism if democracy has any future."

Whether the breadth of Wright's vision was powerful enough to achieve the effect that he desired is up to the individual reader to decide but for now let's examine some of the features of his ideal or 'Usonian' * communities.

'The Living City' contains sections on many of the building types that will grace the Usonian city of the future. There are chapters on offices, apartments, motels, theaters etc. But perhaps the structures that would most exemplify the philosophy and spirit of these settlements are the following three.

These would be - "a salient feature of every countryside development of the county, wherever the county seat may be."

As will be seen from the above quotation these centers would serve a much wider variety of functions than present day community centers do. They would serve as mini 'town centers' offering a full range of recreational facilities.

These would be 'live in' establishments where the brightest and best in the local community or those with some flair for practical design, would work with machinery donated by industry to create new and original designs. Industry would also provide tutors for these style centers and benefit from the results of their work. Wright insists that there should be no entry exams for these establishments. He also maintains that these centers would have real producing power and that, "each month a supply of usefully beautiful things would be ready for roadside markets."

Roadside markets are perhaps one of the more interesting and original features of the Usonian community and we will turn our attention to them next.

Wright describes them as follows:-

"Great spacious roadside pleasure places these markets, rising wide and handsome like some flexible form of pavilion - designed as places of cooperative exchange, not merely of commodities but of cultural facilities."

Wright sees the germ of these future establishments in modern day county fairs and farmers markets, however in the Usonian community of the future they would serve a multiplicity of new roles and would replace city centers as hubs of exchange and commerce. Critically they are 'places of cooperative exchange' so we must assume that the many  local homeowners and small scale agricultural producers, all those families living nearby with one, two or more acres of land, would be able to market their surplus produce here.

Local 'design centers' would also display and sell their wares in these markets.

Should you wish to read beyond this brief introduction to Wright's Broadacre City vision the following links will prove of interest:

* 'Usonian' is a term which Wright often employs to describe his uniquely American organic, democratic style of architecture. He claims to have borrowd it from Samuel Butler's 'Erewhon'. Interestingly it has been claimed that Butler nowhere employs this term in his work.