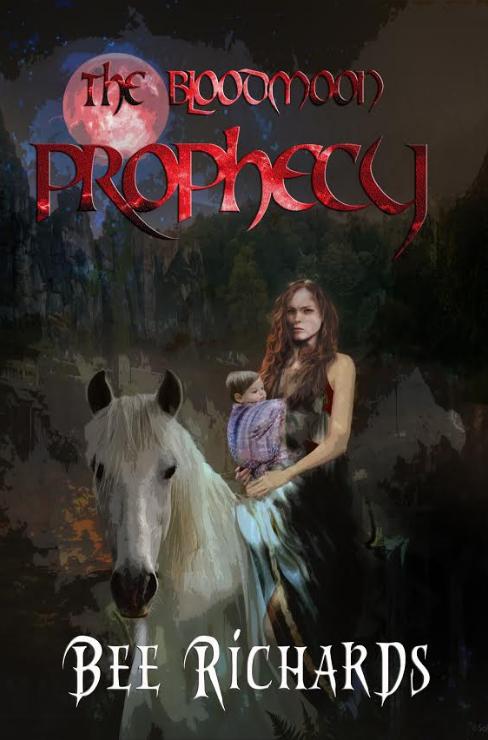 AmeriCymru: Hi Beryl and many thanks for agreeing to this interview. How would you describe your new novel The Bloodmoon Prophecy ?

Beryl: Thank you very much Ceri for interviewing me.

AmeriCymru: How would you describe The Bloodmoon Prophecy?

Beryl: The novel was inspired  by the hills around Port Talbot.  From where I live I can see two burial mounds outlined against the sky.  Port Talbot is heavily industrialised and I had an epiphany moment when I realised that the romans had been here in their struggle to subdue the local tribe the Siliurians.  I started researching and found traces of many prehistoric tracks and dwellings, burials and a late roman gravestone. There are circles and other sites that have not been excavated but go way back.  Some of the Welsh placenames are said to have commemorated battles between the local tribes and the Romans.

It is with this in mind that I undertook to write The Bloodmoon Prophecy, using the historical locations as my muse.  Gradually a story of Celtic magic, aggression, conflict and honour let itself be known to me. The two women involved in telling the story live 2,000 years apart.  I still don’t know if it is magic or real.  I leave you, the reader to decide.

AmeriCymru: What can you tell us about the ancient Welsh Tribe, the Silures?

Beryl: Wales has an ancient history and culture which will compares more than favourably with world culture.  It took the Romans 25 years to finally subdue the Silurians who occupied mountainous territories in the Southwest of Wales They were considered as the most hostile and brave tribe,  They were fearless in battle, but did not have the discipline, training or equipment of the Romans which was their ultimate downfall.  The Silurian launch of Guerilla tactics confused the Romans, which was a qiick onslaught and an even quicker disappearance into the hills, initially confused them.  Ultimately, they were outnumbered and when Caractacus was captured their resistance broke down. They inhabited the hilltops and farmed, raised cattle and made weapons out of a new metal called iron.    The Silurians were not just an isolated confederation of tribes.  The lived in a complex, highly organised and sophisticated society.  Women had substantial rights.  If they got divorced they took whatever dowry they brought to a marriage plus the profit it had earned.  There was a complex religious system headed by the Druids, who were responsible for negotiating between fights between the clans (there were a few), law making, bardic traditions and healing.  They were volatile, intelligent and creative, and on occasions violent. The ultimate discipline and tactics and superior numbers of the Romans defeated them.  Certain elements of the Celtic tribes were Romanised but the larger and remote populations hardly ever altered their lifestyle. Trade with the Romans and the taxes which they extracted did not subdue their identity and culture.

AmeriCymru: Care to tell us a little aboiut your previous novel - Golconda?

Beryl: Golconda one of my previous novels was a story of Welsh Copper and the world wide trade which it stimulated.  Wicca and the plight of the Indentured Servants which were used before slavery is highlighted. Port Talbot is known for its heavy industry, steel, formerly coal and its huge deep water harbour.  The Silurians seem to have occupied the flat tops and the hilltops. The coastal plain was heavily forested.  The Romans seemed initially to have arrived from the East.  They built a fort at Caerleon and subsequently went inland with forts established at strategic points.  Scapula invaded at various points through what is now the Welsh Borders and the Marches finally subduing the Welsh.  The river Neath was used to establish a fort named Nidum, the estuary being tidal was ideal for landing supplies etc.,

AmeriCymru: You write historical fantasy fiction. What inspired your interest in history? Would you agree with R.S. Thomas that it is not possible to ".... live in the present, at least not in Wales?"

Beryl: It is the unlikely background to my upbringing in the industrial town of Port Talbot.  My father introduced me to my love of history, taking me around the Abbey here, telling me tales of Margam Castle and the early Christian stones found in the tiny museum at Margam.  At nine years old I was hooked!  I owe him a debt which I could never repay.

I have always been interested in writing and coupled with my historical research it seemed to be natural to combine both in a novel.  BLOODMOON is the first of a trilogy.  I am busy beavering away on the second in the Series THE CARACTACUS CODE.  As usual I am planning the book, but sometimes the characters do something totally unexpected, and the plot takes another twist.  Typical of my screwy imagination!

R.S Thomas said “it is not possible to live in the present.  At least not in Wales.”  This is a statement to which I am in total agreement.  We are surround by castles, hillforts and legends stretching back into the mists of time.  Coupled with my fascination for locked boxes, enigmas and my Welsh cultural heritage it is sheer pleasure for me to write about such things.  There is not a lot known about the early Silurian/Romano period.  The mountains to the east of Port Talbot have been well excavated by the Glamorgan and Gwent Archaeological Trust, but not the area around Port Talbot. There was an attempt in the thirties.  For me the landscape tells its own story, which of course if a figment of my imagination.so fascinate me.    I consulted old maps and any books which I could find on the subject, which led me down a magical personal path of fascination which has stimulated my writing juices and have introduced me to the works of Wilson and Blackett, a controversial pair who have discovered a rich source of the legends and forgotten sources of old Welsh history, which academics seem to refute.  This is not an argument I want to enter into, but this is a fascinating source of material and legends and is followed by a lot of colourful people, which as you know Ceri, also fascinate me.  My head is full of the mysticism and legends of these people.

AmeriCymru: Where can our readers purchase 'The Bloodmoon Prophecy' online?

Beryl: The Bloodmoon Prophecy can be purchased on Amazon.

AmeriCymru: What's next for Bee Richards? Any new titles in the works?

Beryl: Currently I am working on the sequel to Bloodmoon with the working title of  The Caractacus Code which I hope to bring out later this year.  Ceri I thank you for your time and interest.  Speak to you soon.