DEREK BROCKWAY BACK WITH A BOOK OF WELSH COASTAL WALKS 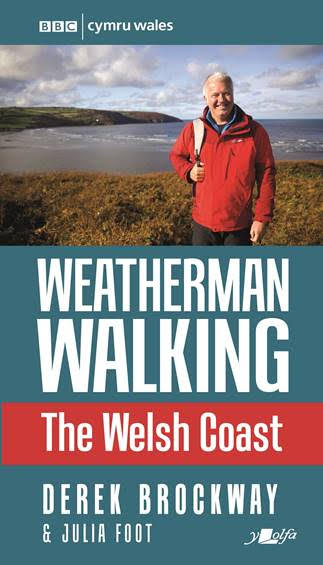 Wales is known for its stunning scenery and beautiful coastline. Created from several existing coastal paths – such as the Pembrokeshire Coast Path National Trail – the Wales Coast Path has attracted thousands of tourists and walkers since its official launch in May 2012. This week sees the publication of  Weatherman Walking – The Welsh Coast , the book accompanying BBC Wales’ beloved weatherman Derek Brockway’s twelfth series of the popular BBC programme. Originally broadcast on BBC Wales, all eight episodes of the series are now being shown on the BBC and are available on BBC iPlayer.

Wales is the first country in the world to have a continuous footpath stretching along its entire coastline – 870 miles or 1,400 km long.  Weatherman Walking: The Welsh Coast  contains 15 guided walks along the Wales Coast Path, each between 4 and 8 miles. They cover a good geographical spread of the coastal path around Wales, with walks in Pembrokeshire, the Llŷn Peninsula, Anglesey, Gower, Glamorgan Heritage Coast, Denbighshire and Ceredigion. [Full list of walks to be found below].

“I am so lucky to present a programme like  Weatherman Walking . Not only do I visit many beautiful places but I also get to meet and work with lots of wonderful and talented people! Wales is such as beautiful country and each area has something unique to offer – from the light of Anglesey to the spectacular Pembrokeshire coastline, each section is full of history, myths and the wildlife. I hope you enjoy the book and the walks featured!” said Derek Brockway.

“This is the first time I have worked with ‘Derek the Weather’ and it’s been an absolute joy. His passion for Wales and walking has been infectious, and it’s been wonderful to see the great affection the Welsh public has for him,” says Julia Foot, the Series Producer of  Weatherman  Walking: The Welsh Coast  for BBC Wales. “I have personally walked every one of the walks in this book, often with locals or path rangers who have given me a real understanding of the particular identity of that section of Coast Path, including the wildlife, history and secrets they hold. These people have helped bring the various coastal stretches to life, so they are no longer just 2D sections of an OS maps.”

Each walk has its own chapter and includes an OS route map and essential information for walkers as well as directions. Most walks can be paired, meaning that they can either be done separately or as one long continuous hike. Each chapter presents lots of interesting information about the landmarks that can be seen on each walk, as well as about unusual local activities or people that Derek came across in the related episode.

Derek Brockway was born in Barry, South Wales and has been passionately interested in the weather ever since he was a young boy. A qualified meteorologist, he was employed by the Met Office for 20 years and became the main weather forecaster for BBC Wales in 1997. He now presents a number of radio and television programmes, including  Derek's Welsh Weather  and  Weatherman Walking . His leisure activities include walking, squash, skiing and leaning Welsh.

Julia Foot has worked for the BBC for over 20 years as a researcher, Assistant Producer, Director and now Series Producer, and on a whole range of programmes, including with Ray Mears,  DIY SOS , and for Comic Relief. In 2018 Julia was nominated for a BAFTA for an  Antiques Roadshow  special that she produced about the Holocaust.


Where the walks are paired, they can be done together as one longer walk if preferred.