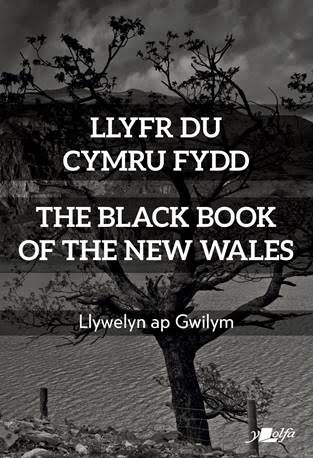 “I don’t expect everyone to agree with everything in the book – it will be too radical for some, and for others it won’t be radical enough,” says author Llywelyn ap Gwilym about his new bilingual book,  Llyfr Du Cymru Fydd / The Black Book of the New Wales  (Y Lolfa), which is published this week.

The organiser of the AUOB Cymru rallies which attracted thousands to pro-independence marches in Cardiff, Caernarfon and Merthyr pre Covid-19 has written his vision of an independent Wales. Llywelyn ap Gwilym, who is also on the Central Committee of YesCymru, said:

“I’ve supported Welsh independence since I can remember, but without questioning why. Since the birth of my children and moving back to Wales, I’ve thought more deeply about the politics, economics and sociology behind it: I’ve thought more about the ‘why’. Whilst writing  The Black Book of the New Wales,  I started to think that perhaps I could encourage the discourse to develop.”

The book is an exploration of what a future independent Wales could look like. It is written in the spirit of utopian thinking: its purpose is to question what is, and to envision what could be. Some of the ideas presented are a radical departure from the status quo, while others are becoming part of orthodox leftist thinking. Similarly, there are some precedents in terms of current or former organisations and institutions, others have only been trialled, while some have not yet existed.

The book has been described as “an exciting blueprint for building a better society” by Dan Evans of Desolation Radio and Leanne Wood, Plaid Cymru has said, “For the Indy curious, this is a must-read.”

The percentage of people in Wales supporting independence has almost tripled over the last six years from 12% in 2014 to 35% in 2020. The Welsh Independence movement is gathering momentum, with membership of YesCymru growing from 2,500 to 17,000 during 2020, and now gets regular attention in the UK media as well as further afield.

“I hope that the book will help expand further discussions so that more people start sharing ideas on what our values are, what kind of society we want to live in, and how independence for Wales is the most realistic path in order to achieve these changes. It would be tragic to lose the chance to ensure a better future for all who call Wales home and, on winning independence, just to recreate the inequality and unjustness that’s rife in the UK.  The Black Book of New Wales  is my contribution to ensuring a better future.”

The Black Book of the New Wales by Llywelyn ap Gwilym (£4.99, Y Lolfa) will be available by 1 st  March.


Praise for  The Black Book of the New Wales

“Concise, challenging, doable! There are radical ideas for the kind of Wales we can be, but we need independence, and independence of mind, to unlock that potential. It can’t come from Westminster. Better a Good Wales than a ‘Great’ Britain.”

“… a cracking piece of work. Very clear thinking. Good, sound values base. I love the references you draw on – some of my favourites – Raymond Williams, Gramsci, Bookchin, Bell Hook, Malcolm X, Maya Angelou, the Preston stuff and Mondragon. And the way you bring all the thinking together… Your book outlines why it is not tenable for people in Wales to carry on as we are and offers an inclusive vision of real independence. For the Indy curious, this is a must-read.”

“A small book with big ideas! A welcome addition to the independence debate.”

“Llywelyn ap Gwilym’s The Black Book of the New Wales doesn’t claim to have all the answers, it weaves together an empowering series of concepts and initiatives that are ready and willing to form new institutions and structures.”

Ben Gwalchmai, Founder of Labour for an Independent Wales

“An exciting blueprint for building a better society.”

“Llywelyn ap Gwilym’s  Llyfr Du  is an essential contribution to the vision that will liberate Wales from the decaying British state.”