Circling The Square - An Interview with Author David Jones

Click here to read our review of 'Circling the Square'
...

AmeriCymru:  Hi David and many thanks for agreeing to this interview. Care to introduce the community of Cwmbwrla for our readers? Where in Wales is it and what is its history?

David: Cwmbwrla is a district of Swansea, on the South Wales coast. It’s home to 8,000 people and has produced some of Wales’s most celebrated sporting figures and artists. In particular, it’s well known as the birthplace of John and Mel Charles, Ivor and Len Allchurch and Mel Nurse, five of Wales’s finest footballers. But it’s the people who aren’t so famous that I admire the most. The people who quietly find a way to make other people’s lives better and never expect any thanks for it. There are a lot of them in Cwmbwrla.

AmeriCymru:  How has the coronavirus pandemic affected Cwmbwrla?

David: The pandemic had a notable effect on small businesses in the area, forcing their prolonged closure and jeopardising their futures. People who were forced to socially isolate found it difficult to cope with the lack of human contact and many families found themselves in an awkward financial position. Luckily we have community leaders who’ve worked tirelessly to address these problems, led by Emma Shears, a Local Area Coordinator who has done a remarkable job of bringing people together to support those in greatest need.

AmeriCymru:  What gave you the idea for this book? What inspired it?

David: On the May bank holiday this year, my neighbours and I gathered outside our houses to share a socially distanced drink and reflect on the unusual turn the year had taken. One of my neighbours mentioned that their mother, who had lived in the area all her life, had interesting stories to tell and shared one or two anecdotes. I then shared some examples of the good things that local people were doing to help each other through the lockdown. It occurred to me that these anecdotes were worth documenting. People’s stories are worth telling.

AmeriCymru:  The book consists in large part, of personal and family histories. How did you go about collecting these? How willing were people to participate?

David: I brought the idea to a group that had previously come together to organise local events and we compiled a list of people we thought would have interesting contributions to make. We also shared the idea on social media and encouraged people to share their stories. It was then a simple matter of picking up the phone. When you spend time talking to people – and more importantly listening to them – their stories emerge. People were happy to participate but many of them initially protested that “I haven’t really got anything to tell you” or “I’m not really doing anything to help”. It didn’t take me long to realise that they were being far too modest. And talking about family histories made it clear that Cwmbwrla us a place where children are proud of their parents and parents are proud of their children. That’s certainly something worth celebrating.

AmeriCymru:  Do any of these personal reminiscences stand out for you? Are there any interviewees/stories that you would like to highlight?

David: It’s difficult to single anyone out because I interviewed almost 40 people and I ended up admiring all of them. But if I had to choose two I would nominate “All Heart” and “Finding our Way Home”. “All Heart” is about Colin Lightfoot, a small business owner who has run a local greeting card shop for the past 40 years. He treats customers as friends, he does everything he can to make people happy and never puts himself first. Earlier in 2020 he was admitted to hospital with a heart problem, and he’s still there now. People love him, they miss him and they want him to know how much he means to the community. Hopefully the book will make it clear. “Finding Our Way Home” tells the story of a remarkable group of women who started up an emergency food resource. They realised that many local families would struggle to put meals on the table in 2020 and they set about building up a supply that could be shared with those who needed it. The need still exists, so the food resource is still active. People are taking care of each other.

AmeriCymru:  You also have a section titled  'Covid-19 Heroes'. Care to tell us a little about these?

David: I’m in awe of the local people who’ve stepped up to help their neighbours at this difficult time. These aren’t wealthy people, they’re working women and men with their own problems to solve and their own families to support, but they’ve chosen to give their time, effort and resources, cooking for their neighbours, shopping for them, collecting their medication, just picking up the phone and talking to them. A lady named Lisa Challenger comes immediately to mind. She told me it breaks her heart to see neighbours, many of them older and vulnerable, not having cooking facilities and never sitting down to a good hot meal. Her response has been to cook hundreds of roast dinners, all at her own expense, giving people something to look forward to, giving them sustenance and keeping them healthy. And Lisa will tell you that she isn’t doing anything special. She’s doing something very special, and she’s just one of the COVID-19 heroes who make me proud to live in Cwmbwrla.

AmeriCymru:  Where can people buy the book online?

David: The book is available in paperback and ebook form on Amazon. I hope people with Welsh roots will recognise the warmth and inclusiveness of this community. I hope it will remind them of the best of Wales.  Circling the Square: Cwmbwrla, Coronavirus and Community

David: Now that I’ve seen how much it means to people to have their lives and their work acknowledged, I’ll be pursuing similar projects in 2021. In February I’m helping my friend Jeff Phillips, a local artist, organise “Swansea Past, Present and Future”, a celebration of arts and culture through the ages in our city. I’m planning another “people’s book” to accompany this event. I feel privileged when people share their stories with me, and I’ll try my best to do them justice. 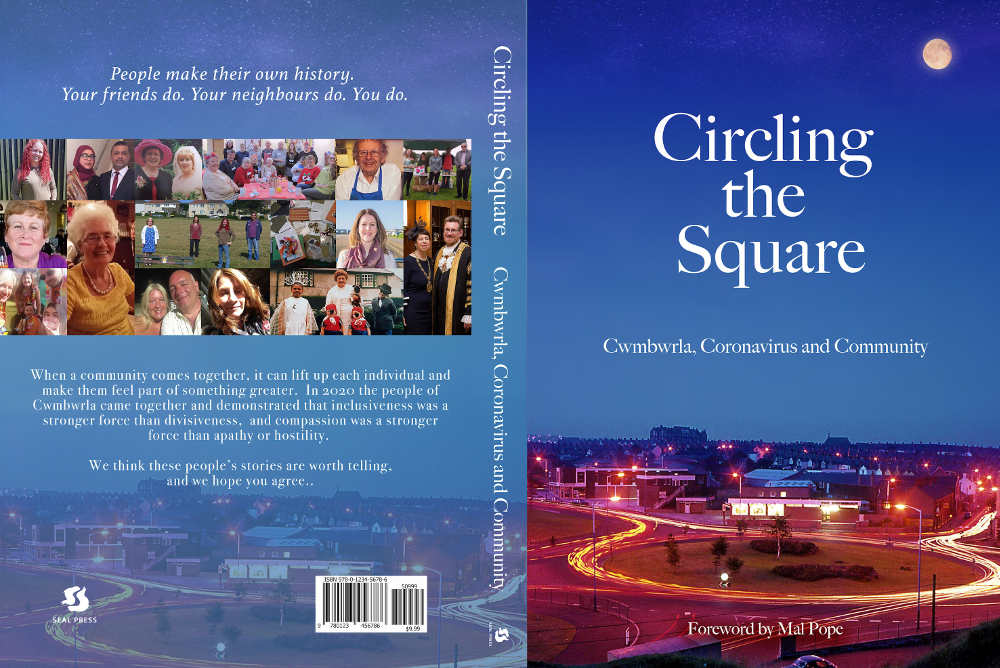