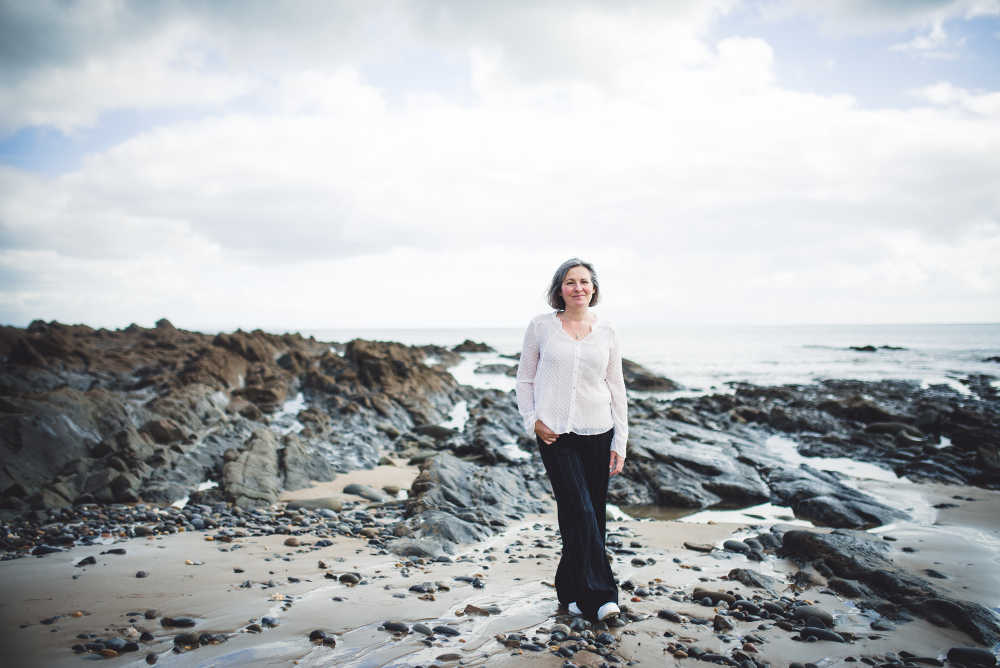 AmeriCymru: Hi Eloise and many thanks for agreeing to this interview. How did you become the first Children's Laureate Wales? What is the selection process?

Eloise: You are very welcome. Thanks for inviting me! It's so good to be here.

Literature Wales, the national company for the development of literature in Wales, put out a call for expressions of interest. I'd worked with young people a lot over the years - taught Drama and English, developed plays with community and youth theatres, toured with theatre-in-education projects - and since starting to write for young people I'd run hundreds of creative writing workshops to develop writing skills, creativity and imagination. I thought I'd express my interest so that I would be considered for the role at some point in the future, without any expectation of being considered for the position. Needless to say, I am thrilled to have been selected. It's an honour and a privilege.

AmeriCymru: You are involved in a project to create a new updated version of the Mabinogion. Can you tell us more about this exciting project?

Eloise: Absolutely! The Mabinogion are the oldest British stories to be written down and are a really important part of our heritage. When the author Matt Brown came to me with the idea to get these stories written specifically for young readers, I thought it was genius. I also couldn't believe it hadn't been done already!

In all honesty, I was hesitant to become involved at first. I have a pretty full timetable with laureate work and work as an author, but in the end, I decided that it was a really important and meaningful project and one I would definitely need to get behind.

It came as a shock to me how little I knew about the stories. Casting my mind back, I know we didn't learn about them at school and though most of them have crept into my consciousness somewhere along the line, it just seemed dreadful that I didn't have a better knowledge of them. We hope this collection will mean that young people everywhere will have the opportunity to fall in love with these stories and that they can be celebrated and known by everyone!

We have a fantastic line-up of great Welsh writers, authors and poets bringing the stories to life - Claire Fayers, Sophie Anderson, PG Bell, Alex Wharton, Hanan Issa, Darren Chetty, Zillah Bethell, Catherine Johnson, Nicola Davies, Matt Brown and me - and the stories will be told in diverse and creative ways. All eleven tales will be translated into Welsh by Bethan Gwanas in the same volume so that they can be read alongside the English versions, and the collection will be beautifully illustrated by the brilliant artist Max Low. It's a really exciting project and we are doing everything we can to shout about it! 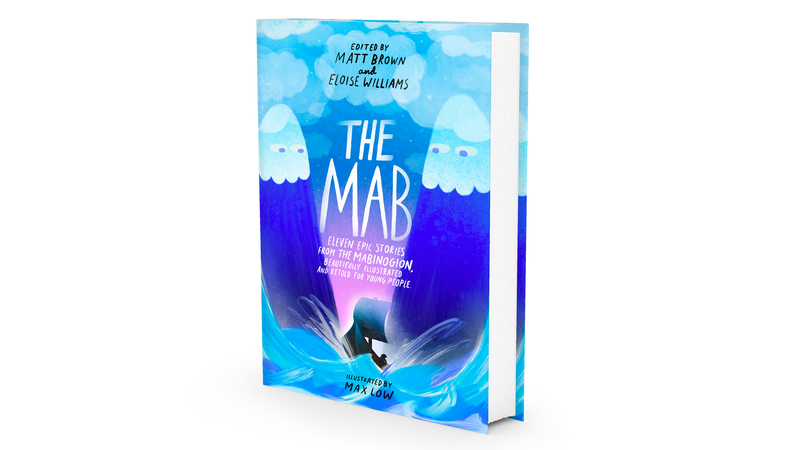 ( Click the image above to go to the 'Mab' support page )

AmeriCymru: When will the new Mabinogion be available and where will readers be able to purchase it online?

Eloise: This is where readers can help us to make this a reality! We are crowdfunding the project through a company called Unbound . There are all sorts of rewards you can get your hands on - a copy signed by all of the authors, a tote bag, original art work, virtual author visits - you get your name printed in the back of the book and you'll be part of something really important. We would love it if you would support this project if you are able and if you could help us to spread the word that would be absolutely wonderful too.

AmeriCymru: What does the Children's Laureate do and what are you hoping to achieve in this role?

Eloise: The Children's Laureate role has been created to highlight the importance of, and to promote, creative writing by and for young people in Wales. It gives me an opportunity to work with lots of children who may not already see themselves as storytellers. I believe everyone is made of stories and all voices and words are important. I encourage creativity and imagination over spelling and grammar. I think lots of young people – and older people too - are put off telling stories because they worry about their academic ability.

It’s only my opinion, but I believe that punctuation is something that can be sorted at a later date. Without imagination there is nothing to edit in the first place.

I want all young people to see themselves as part of the literature landscape of Wales. We need vibrant new voices from all sectors of the community, and I see it as part of my job to convince young people of how essential a part they play in making this happen.

The platform also gives me a chance to put a spotlight on children’s writers from Wales which is just a lovely thing to do. We have so many talented writers creating children’s stories with such expertise. It’s a joy to be able to celebrate their words.

Eloise: I've been a patron of reading for three different schools over the last five years. It's a role to promote the value of reading for pleasure and to break down the barriers between the author and the reader. It's been a fantastic opportunity to have a close relationship with schools and for the young people to have an author at their disposal!

We launched the Children’s Laureate Wales initiative at one of the schools. I’ve run creative writing competitions with them, co-written stories with pupils, answered questions about the writing process, discussed how to become an author and what it is like when you are published. They’ve let me know what they are reading, and we chat about why they like certain stories more than others. It’s up to the author how much time and connection they want with each school and it’s beneficial on both sides. I’ve run new pieces of writing past young people to get their feedback and they’ve given their feedback very honestly!

AmeriCymru: You currently live in Pembrokeshire but you have lived elsewhere in Wales in the past. Care to tell our readers a little about your history?

Eloise: I was born in St. David’s Hospital in Canton opposite where Ivor Novello was born. I was the first baby on Easter morning which meant my mother was given a celebratory cake by the nursing staff. She was thrilled until they shared it out with everyone on the ward. I have inherited this selfishness when it comes to cake.

For the first few years of my life I lived close to Victoria Park in Canton and then Caerphilly, I remember very little of this time though I romantically recall it as a time I played next to one of the most magnificent castles in the world.

From there we went to live in the historical town of Llantrisant with another castle – smaller and much more ruined – practically in our back garden. Llantrisant was a place of festivals and beating the bounds, historically the home of Dr. William Price a famous Victorian vegetarian nudist and a pioneer of legal cremation, it has a forest to one side of it complete with Bronze Age burial mounds and is laced in legend. We had stories under our feet wherever we walked.

AmeriCymru: When did you first decide to write? How would you describe your creative process?

Eloise: I decided to take the MA in Creative and Media Writing at Swansea University and graduated in 2011 with Distinction which was a definite surprise to me. I’ve always been creative but not particularly successful academically.

I'd been on the road for a long time, touring around different theatres across the UK and had been having a glorious and very tiring time. A decade as an actor was a wonderful experience. I got to act in some of the most superb plays ever written and learned about character and story and most importantly, I think, the sound and spell of words. One fateful day, I was on a stage at the Wales Millennium Centre in Cardiff and I decided that I had words of my own to say instead of other people’s scripts, and I wanted to write them down. I've always been impetuous and knew to trust this instinct to write but I didn't have the confidence to go ahead without trying some skills out first. University workshops were humbling and scary, but I stuck with it, whilst holding down lots of different jobs, and despite being sent a letter to tell me I was at risk of being dismissed from the course for non-attendance (work often clashed with workshops) I eventually graduated.

My creative process seems to be different for every project. I tend to start VERY enthusiastically with an INCREDIBLE idea, then reach what I have now named the grumble stage. This is where I make low murmuring and disparaging remarks about my ability to create anything at all ever again. Once these two stages are out of the way, I get to work. Research first (and during). I plot a bit now - I used to just forge straight ahead. I use record cards to jot down thoughts and have a drawer where I stash all the glittering ideas for other books which appear bright and shiny and tap dancing through my head when I don’t need them. I work hard, make sure I turn up at my laptop, get frustrated most days. Some days are beautiful and filled with a sense of achievement but lots of days are graft. I guess I have a strong inbuilt work ethic from my parents which has seen me through the more difficult drafts. I also love to question and create almost as much as I love to procrastinate. I turn my WiFi off.

AmeriCymru: What can you tell us about your new novel Wilde ?

Eloise: Wilde is a story which is essentially about celebrating individuality and also about being kind to yourself.

Can she break the curse of the witch called Winter?

Being different can be dangerous. Wilde is afraid when strange things happen around her. Are the birds following her? Moving to live with her aunt seems to make it worse. Wilde is desperate to fit in at her new school. But in a fierce heatwave, in rehearsals for a school play telling the local legend of a witch called Winter, ‘The Witch’ starts leaving pupils frightening curse letters. Can Wilde find out who’s doing it before everyone blames her? Or will she always be the outsider?

Wilde has witches and waterfalls and history and legends. It also has a donkey named Duran Duran which gives my age away, I fear!

AmeriCymru: What's next for Eloise Williams? Any new titles in the offing?

Eloise: This is where my superstitions jump in and tell me that if I give away any information at all I will jinx everything I have coming up. I think I developed this strange and wonderful superstitious nature while working as an actor. There's a lot of ritual and belief in luck in that career. Not mentioning the Scottish Play by name, no whistling backstage, turning in a circle three times and spitting, or some such thing?!

In other words - I do have some things in the pipeline but I can't tell you anything specific about them! I'll be following my love of folklore and fable, history and landscape, all that is other and strange and a little bit odd, down various pathways. I know that's pretty vague but it’s all I can give away at the moment.

Eloise: As I said earlier, we are all made of stories – that includes you! Tell your stories to other people. Tell them in any way you want to. Get them out there and celebrate them. Who knows, your stories could be part of a Mab collection in the future!