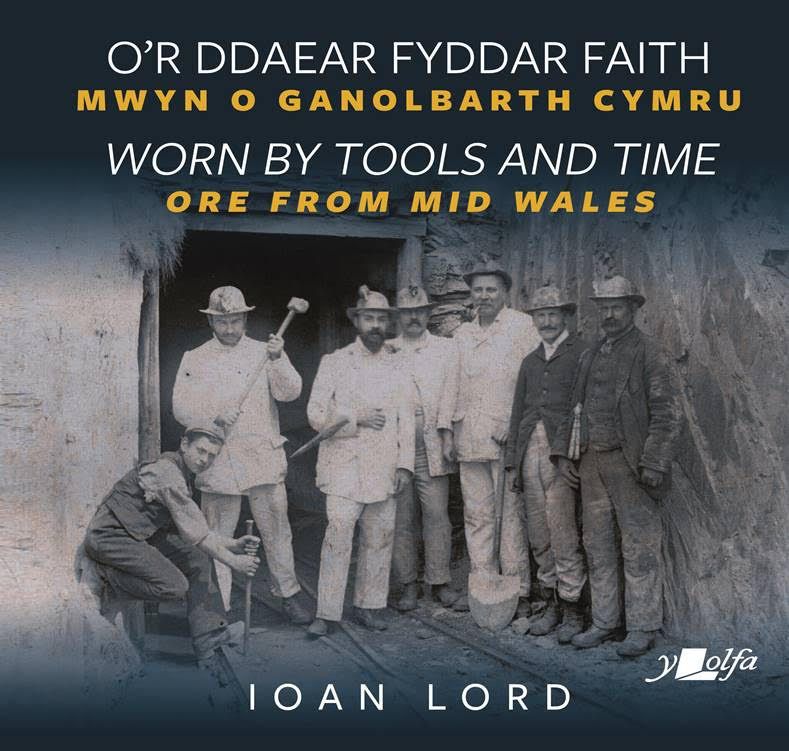 South Wales’ coal industry is world famous, and north Wales’ slate industry is recognised thanks to the Slate Museum in Llanberis as well as numerous publications celebrating its history. But what about the lost ore industry in mid Wales? Ioan Lord, author of a new bilingual book on the subject,  Worn by Tools and Time: Ore from Mid Wales  (Y Lolfa), hopes to bring attention to the history and the importance of the industry and its workers through his descriptive text and brand-new photographs of the underground world created centuries ago.

“The fact that such a small number of people – both local and nationally – are aware of the ore industry in mid Wales is one of the main reasons behind the book,” said Ioan Lord. “I hope that this will lead to more sites being safeguarded and protected. So many have been destroyed and landscaped over the years, it is important to try and save the remains that still exist. After all, they are monuments to hundreds of men, women and children who laboured in these places up to 4,000 years ago and continuing to destroy the remains is an affront to their memory and lives.”

Worn by Tools and Time: Ore from Mid Wales  chronicles briefly the history of the ore industry in mid Wales and its role in Britain’s metal industry. The history of the industry, the people, the society and work conditions are told through photographs as well as archival and modern diagrams. The book contains stunning underground scenes which have not been seen before, with artefacts, tools and original material also recorded.

“Whilst researching I had the most incredible experience. I read the memoir of one of mid Wales’ last miners, which was recorded on tape in the 1970s. Following this, my friends and I went to try and find his old work site, as he had mentioned the details on the tape. We managed to dig through a large collapse at the entrance to gain access, the first time that anyone had been there for over a century. All the tools were still there; hats, shoes, tobacco pipes, a lunch box, and even their footprints in the mud on the floor. Linking these things with the old miner was thrilling”, said Ioan about his work.

Ioan believes that the reason that the history has been largely forgotten is due to a combination of it coming to an end more than a century ago (1870s –1910s) and the fact that the population who worked in the industry was relatively small.

“When the ore sites closed, the majority moved to work in the coal mines in south Wales. But when the coal mines closed, as well as being more recent and as a result the population was a lot larger, there wasn’t any work for the workers to move to. The result was that the ore industry in mid Wales was forgotten. Before the Industrial Revolution the mid Wales ore industry was well-known over Britain. This was one of the first industries to close because of cheap imports from abroad, but because it was surrounded by bigger industries which were still succeeding (coal, slate) it slipped quietly away.”

This is the first book to include such a wide variety of new underground photographs, which record all the ‘newly discovered’ sites that have not been seen for over a century. Many of the underground photographs in this book were taken after weeks of careful digging and searching, in order to gain access to these time capsules, where tools were left where they were by the people in the previous age, and not a soul has seen the items since they were left.

Ioan Lord was brought up in Cwm Rheidol, near Aberystwyth, which is located in the middle of an old ore site in mid Wales. His interest developed from a young age, as he explored the area and saw the old ruins of the ore industry. Ioan Lord is now studying for a Doctorate at Cardiff University in the Welsh History and Archaeology Department. He is Director of the Welsh Mines Preservation Trust and the Cambria Mines Trust. He lives in Cwm Rheidol.