AmeriCymru: Hi Sarah and many thanks for agreeing to this interview. What is your Welsh background and how important is it to you?

Sarah: My Welsh ancestry comes through—among others—my umpteenth great grandfather, William Woodbury, who self-identified as a Welshman when he arrived in Salem, Massachusetts in 1628. I am also descended from a host of Morgans, Thomas’, Kemries, Johns, Rhuns etc.  The line I’ve researched most successfully descends from Llywelyn ap Ifor born around 1300.  Six generations later, Sir John Morgan (1448) was knighted. One of my readers kindly researched my ancestry back all the way to Gruffydd ap Cynan, King of Gwynedd, through his grandson, the Lord Rhys (d. 1197), as well as Hywel Dda (d. 950). Woodbury is, of course, a very Saxon name, and those roots lie in Somerset.

We are all a product of the stories we tell about ourselves. I heard growing up that I had Welsh ancestry, but I never knew the extent of it until I started researching. Once I realized the extent of it, I read everything I could get my hands on about medieval Wales—and then began writing novels set in that time. I would say it is pretty important to me! At the same time, I know people with little to know Welsh ancestry who love Wales and Welsh history and culture, so I don’t think it’s a perquisite for becoming interested and involved.

AmeriCymru: How much of a challenge is it to set novels in medieval Wales? Presumably readers are not as well aware of Welsh history as they are of English or Scottish?

Sarah: After I published my first books, I used to say that part of my job was to educate as well as entertain. 1143 Wales is not the Tudors! It is always a balancing act between making the story fun and engaging and not writing either too much history or making medieval Welsh people and their lives so different that they become in accessible to the modern reader.

Books set in Wales have the additional challenge of having Welsh names and places, which can be inaccessible to a modern English speaker. Some English speakers have a gut negative reaction to the Welsh names that goes back generations and centuries. Some people can’t be helped, but many can be won over by stories that are so compelling they read them anyway—and then find themselves falling in love a little bit with the country and people and coming back for more. 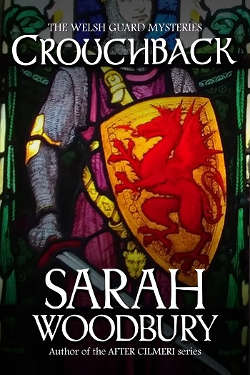 AmeriCymru: Care to tell us a little about your latest title - 'Crouchback'?

Sarah: Crouchback is set in the medieval world of 1284, after the Edwardian Conquest and the death of the last native Welsh Prince of Wales, Llywelyn ap Gruffydd. At Llywelyn’s death, Wales lost its independence and, after the birth of Edward II in Caernarfon in April 1284, King Edward declared him the new Prince of Wales, ensuring that the titular ruler of Wales from then on would be the son of the English king rather than a Welshman.

Unlike my After Cilmeri series, which is set in an alternate universe where Llywelyn lives, Crouchback is set in the real world, our world, where he does not.

It’s a pretty dark time for Wales and the Welsh people.

One of my favorite writing quotes, the provenance of which I am uncertain, says to write a good book, the author needs to give her characters a very bad day and make it worse. In the world of medieval Wales, there was nothing ‘worse’ than the conquest of Wales by King Edward of England. For the two main characters in Crouchback, Catrin and Rhys, their world had, in a very significant way, come to an end. In writing this book, I found myself exploring how a person could have something so terrible happen and still live.

Which the people of Wales did. They endured and even prospered for over seven hundred years, speaking their language and living their lives as Welsh men and women.

And thus, Crouchback isn’t about grief, as it turns out, but about hope and perseverance, courage and love—and finding joy in the darkest moments of our lives.

AmeriCymru: You have achieved incredible success writing more than 40 novels and selling over a million books online. What is the secret of your success? What advice would you give to budding authors who wish to self-publish?

Sarah: Amazingly enough, the secret isn’t to write books set in medieval Wales! During the five years my books were rejected by every publisher in New York, I was told over and over that their marketing department couldn’t think how to sell historical mystery/romance/adventure set in Wales. The answer instead, as it turns out, really isn’t a secret. It’s all about producing consistent quality content on a reliable schedule, just like any other job.

I write a thousand words a day, every day. I work very hard to take criticism well and to seek out people who will tell me the truth about my books before I publish them. I also treat my writing and all that’s associated with it (marketing, publishing etc.) as a business.

But mostly it’s a matter of sitting one’s rear in the chair and writing. Thirteen years of doing that, day in and day out, is bound to produce some books that people want to read!

AmeriCymru: What can you tell us about your YouTube series 'Making Sense of Medieval Britain'? What inspired it and how many episodes will it eventually comprise?

Sarah: The Making Sense of Medieval Britain video project began with some ideas that tie into a question you asked earlier about how few people know anything about Wales. I want to write great stories, but many of my readers, once they get into my books, want to know more about the world in which my books are set. The video series is intended to help with that, in three to six minute installments. And because I’m an anthropologist by training, the focus is on the people of Britain, beginning with the Celts, the Romans, the Normans, etc. The last third is focused almost entirely on the Welsh and medieval Wales. By January, we should have 44 videos in the series, which will complete the first ‘season’.

AmeriCymru: What's next for Sarah Woodbury? Any new titles in the works?

Sarah: Always! Right now, with the release of Crouchback on November 14, I’m working on the latest book in the After Cilmeri series—the one where I change history and Llywelyn lives! It should be out in March.

Sarah: If you do end up reading any of my books or enjoying the video series, I would hope you would reach out to me, either on Facebook or by email. I love meeting people, even remotely, who share my love for Wales!