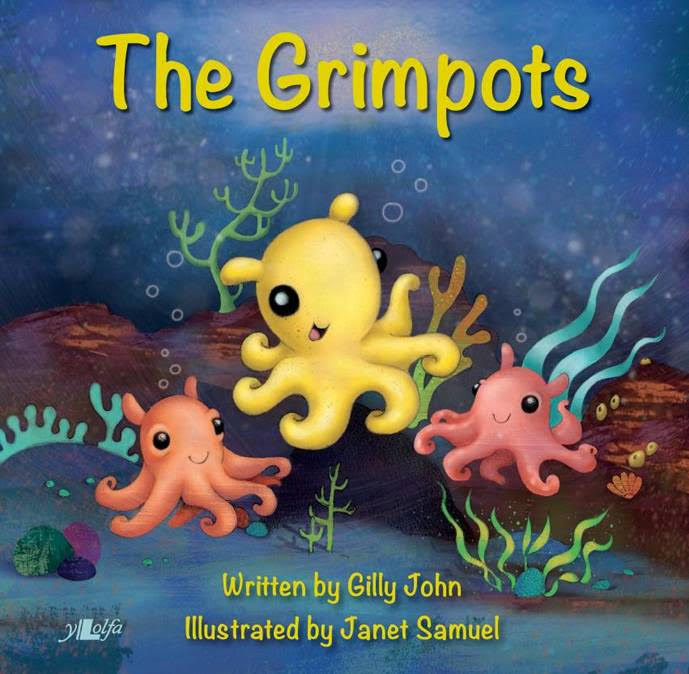 The crisis of plastic in our oceans has been exposed on television in recent months. Now a Welsh author is introducing the importance of marine life and its conservation to children in a new wonderfully illustrated book.

The book is called The Grimpots , about a family of fun-loving umbrella octopuses and has a strong ecological message is published by Y Lolfa. Author Gilly John is fascinated by the natural world and its lesser-known inhabitants, and takes a keen interest in conservation.

“Encouraging children to be curious about the world around them can only be positive for them and the planet. Primarily I want my book to entertain children but raising awareness about the diversity in our oceans is important to me,” says Gilly John, adding:

“Marine conservation has had a boost in recent years, with the extent to which plastic is impacting our oceans being well documented as in David Attenborough’s Blue Planet II series. Children need to learn that the sea is full of living creatures and that we all have a responsibility to keep our seas clean.”

Twenty rhymed verses tell the story of Gus’ adventures in Barnacle Bay where he escapes from a shady shark intent on making him a snack and then helps a big blue whale named Dave. Umbrella octopuses are unusual in that they don’t have ink sacs like other octopuses and so have to use other defensive methods to escape predators.

The book is full of Janet Samuel’s beautiful illustrations which bring to life the underwater world images of cuttlefish, krill, sea snails and eels to name but a few of the creatures illustrated.

Gilly John was born in Gwent but now lives in Caerphilly. She trained as a children’s nurse before turning to write children’s poetry.

Janet Samuel enjoys working with colour and texture and bringing characters to life and has illustrated a number of children’s books.

Gilly John will be attending the Spread the Word Festival(organised by The Stephens and George Charitable Trust) in Merthyr Tydfil on 11 April with a storytelling and book signing.