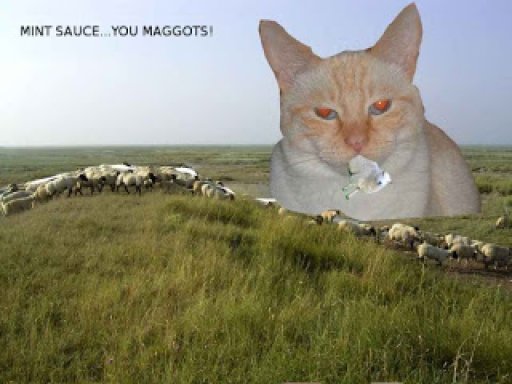 Wales has been plagued by an infestation of "white mountain rats" or "woolly maggots" for many centuries. The recent sightings of giant cats on the hillsides ( 'Zombi Cathod Mawr' in the vernacular )are believed to be a gift to the people of Wales from the mighty Merlin who has, of course, been sleeping in a cave for 1500 years (approx) awaiting the call to come to the aid of his countrymen.

Until now sheep have outnumbered the human population of Wales by a ratio of four to one. It is to be hoped that these figures will improve now that the mutton munching monsters are breeding in the wild.

The "Zombi Cathod Mawr" are mentioned in the Mabinogion and were used by the "Welsh" Celtic tribes ( Silures, Ordovices etc ) in battle against the Roman legions very much in the same manner as Hannibal's elephants. Unfortunately the Romans learned very early on that it was easy to distract the Cathod Mawr by driving flocks of sheep ahead of their legionary formations. This would enrage the Cathod who would disperse in furious pursuit of the sheep thus largely negating their usefulness for military purposes. A legionary commander is quoted by Tacitus as saying:- "Semper in excremento, sole profundum qui variat!!!" , when he first saw Cathod Mawr in battle formation .

The Cathod Mawr were thought to have become extinct some time in the Dark Ages but were obviously sharing a cave with Merlin, Arthur and his Knights, Owain Glyndwr etc etc awaiting the call.