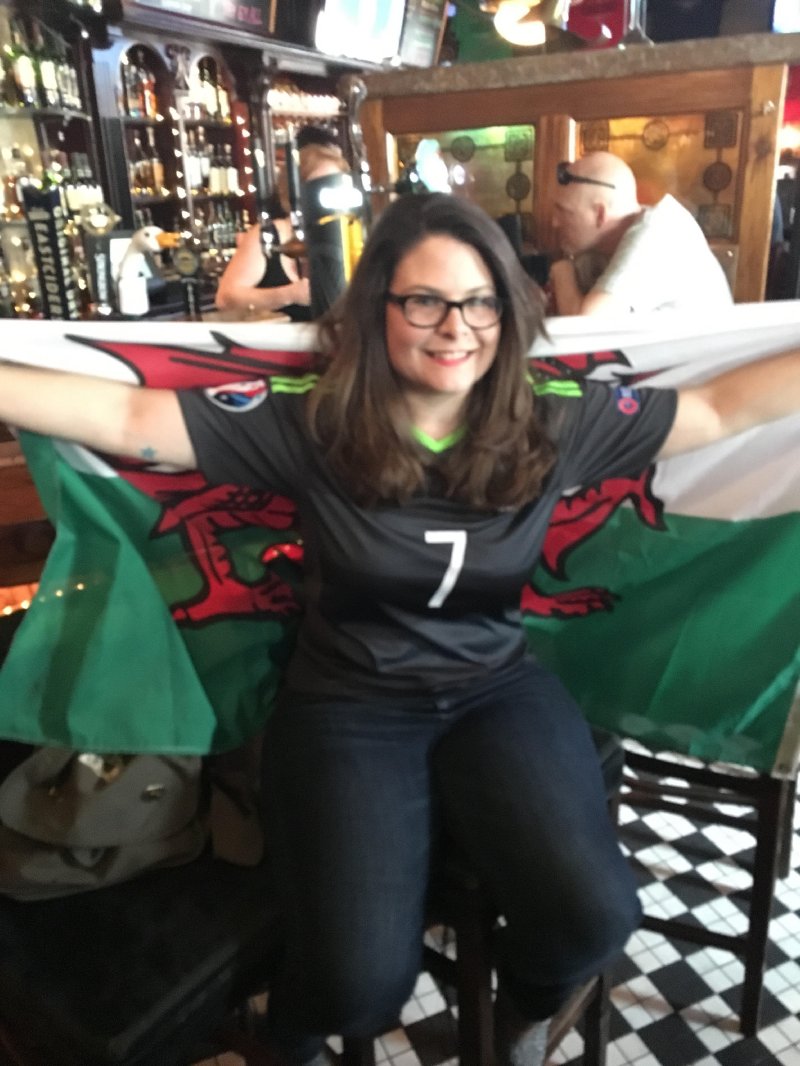 AmeriCymru: Hi Susan and many thanks for agreeing to this interview. How and when did you first become aware of your Welsh heritage?

Susan: I'm a history nerd from a family with quite a few history nerds, so I don't actually really remember "learning" that I had Welsh ancestry. I've always known my surname was Welsh, but my earliest memories about it are sitting in my great aunt's living room and going through some genealogies and family history materials when I was probably about eight or nine years old. And I remember learning that we supposedly came from Brecon (which I have been totally unable to document!), so I always wanted to go there.

When I was in college, I had a Welsh flag on the wall in my apartment, but I've also always been a Britophile, generally. I always read as much as I could about Britain and wanted to live there, since I can remember. Like a lot of Americans, I've always been interested in when, where, how, and why my ancestors came here--and from where. I still haven't been able to make the jump across the pond on my Floyd line, but I have--thanks to the ability we now have to search, view, and share primary source documents using the internet--found out quite a lot about various ancestors, including immigrants to Virginia on my mother's side who came from Monmouthshire and Carmarthenshire. So that's all very exciting.

But , I also have to add: some of the most inspiring, most successful dysgwyr Cymraeg are people with no known Welsh ancestry. They learn the language because they moved to Wales, or they got into Welsh music, or they encountered Welsh literature, or they fell in love with a Welsh person, and then with the language. Welsh is for everybody.

AmeriCymru: You have visited Wales several times. Care to share a few of your experiences from those visits with us?

Susan: I was fortunate to do a study abroad exchange at Lancaster University through UT-Austin as an undergraduate. While there, I joined the mountaineering club, and we went on weekend trips, alternating between the Lake District and North Wales. Our group leader was a Welshman named Huw who always took us to the best places. I especially remember climbing some (what seemed like) 200-foot rock face near Porthmadog and looking back over my shoulder to a sweeping view of the sea. I can't believe I did that now!

I also spent New Year's Eve 2000 in Cardiff, on a little road trip. I went to Britain twice on vacation during college with my best friend, because we were able to get some unbelievably cheap student airfares in the late 90s. So we somehow ended up in Cardiff for New Year's. I still need to get back there and see the city properly--our tour was confined to pubs, a B&B, and external views of the castle!

Then I lived in England for another four years in my early/mid-twenties. I went to Wales a couple of times on weekend trips. I finally made it to the Brecon Beacons in 2005, right before I returned to the US. I'd like to go back there, as well. It was lovely.

Finally, I went to Wales this past November/December on what turned out to be the trip of a lifetime. We've had a direct British Airways flight from Austin to Heathrow for about a year now--such a luxury, very exciting. So when there was a ticket sale, earlier this year, I bought one. I initially planned to just visit friends around England and have a low-budget, low-key trip. But then I started studying Welsh and realized I shouldn't pass up the opportunity to go there, so that became a big part of my trip.

I rented a car in Liverpool and drove around the perimeter of Wales, all the way to Swansea. It was absolutely amazing. I met up with some folks I'd "met" on Twitter during the Euros, one of whom took me on what turned out to be one of the best pub crawls I've ever been on (and I've been on a lot! Ha!). And I caught up with a new friend whom I'd met in Austin at our local Irish pub; she had been over here on holiday during the Euros, and we kept running into each other again and again as Wales progressed. We kept in touch on Facebook and ended up spending a day together, driving around Caernarfon and Eryri! Anhygoel! I met some other folks who had previously been online acquaintances, and they were all lovely--being shown the sights by locals gave my trip an entirely different flavor, and made traveling alone a lot more fun. I also walked about ten miles of the Pembrokeshire Coast Path on my own. I lucked out--the weather the entire time I was in Wales was sunny and gorgeous! I highly recommend visiting Britain in general and Wales in particular during the off-season. At several tourists hot spots I was one of the only tourists! This allowed me have private access to Bryn Celli Ddu on Anglesey, be one of about five people wandering around Caernarfon Castle on a Monday afternoon, and enjoy a very quiet sleepy weekend in St. David's (well, except for the local talent night at the pub, which was another highlight!). And, twenty years after writing my first English lit paper on Dylan Thomas as junior in high school, I finally made it to Laugharne. I also went to an Ospreys match in Swansea (they won). Those are just the highlights! Like I said, it was really the trip of a lifetime.

AmeriCymru: Many people in America were excited by Wales performance in Euro 2016? Can you give our Welsh readers some impression of the excitement that was generated by the contest here in the US?

Susan: I go to a couple of pubs in downtown Austin regularly to watch Liverpool matches with our devoted and rowdy LFC overseas supporters club; Fado Irish Pub shows all of the Premier League fixtures as well as CONCACAF, USA national games, the Euros, and World Cup. The Euros are always my favorite tournament to watch there, though. They decorate the place in the flags of all the competing teams, and give away T-shirts for all the participating countries. One of my friends in the Liverpool group is also a former Swansea academy player. So we planned ahead and took off work on the days Wales was playing. I'd been looking forward to it for months. So that was a blast. We started out with about 10 Wales fans but ended up more like 50 by the quarter-final. I'd say it was about half Welsh folks and half American Wales fans--most of whom, like me, seemed to have some Welsh ancestry but never the opportunity to even see the team play, never mind in the Euros! I still can't believe they made it to the semi-finals. It was just fantastic--like a dream. And also the catalyst for me becoming a Welsh learner.

AmeriCymru: What advice would you give to Americans who want to learn Welsh?

Susan: Americans who want to learn Welsh should know that there has never been a better time to learn the language! Thanks to the internet, it's easy to connect with other learners and Welsh speakers, most of whom are excited by the interest and are therefore very encouraging! I have met some truly astounding, friendly, wonderful people. And AmeriCymru has been an absolutely wonderful resource. As far as actual learning tips, I've just started, but I'd say that taking an actual class has made all the difference. Even though we meet online using Google Hangouts, the regular meetings and expert tutelage keep me on track and motivated to stay serious. It's hard to fit in second language acquisition as an adult--both because of the many demands on your time and the sluggishness of your brain. But practicing daily makes it more of a delight than a chore. I find listening to BBC Radio Cymru is invaluable--just hearing the language spoken as often as possible (even though you necessarily won't understand all that is being said!). If you can locate a real, live person to speak to in person , that's even better! Again, the internet can facilitate connections. I also listen to Jason Sheperd's Learn Welsh Podcast.

So if you're thinking about learning more about the language or doing a course--start now! I've only been studying for eight months, and seriously for only about five, and it's been so fun. To an Anglophone, Welsh looks very difficult. It's not the easiest language. But it's not impossible, either. You'll be surprised how quickly you start making sense of things. And every time you understand a phrase or exchange, you'll want to learn more. Conversations lead to poems lead to songs. It doesn't hurt that the spoken language is quite singularly beautiful.

And, of course, if you can--go to Wales! Flights from the US have been historically cheap for the past year or so, and the exchange rate is still good for Americans traveling to Britain. Who knows what's going to happen with the political situation. But I will say this: walking through the ancient landscape of Cymru and--especially--hearing the living language being spoken all around you... well, it really helps keep things in perspective. Yma o hyd, and all that.

AmeriCymru: AmeriCymru offers an online Welsh class - AmeriCymraeg. As a current student how would you rate the course?

Susan: The course--and especially John Good, our teacher--has been excellent. I am really impressed, especially considering the course fees (very reasonable!) and only one required textbook. Gruffudd's Welcome to Welsh is really user-friendly. I've enjoyed the way John brings his expertise as a musician and music teacher to his methods. I'm so glad there are multiple levels, so that I can continue taking these classes with AmeriCymru. I look forward to Monday nights and missed the class during our Christmas hiatus.

AmeriCymru: You were recently interviewed by the Western Mail Online. How did that come about?

Susan: I'm friends with a lot of other dysgwyr Cymraeg online, and particularly on Twitter. We've all been reading and enjoying Carolyn Hitt's adult learners column for the Western Mail. She saw the photos I posted from my recent trip, and we got to chatting, and then she asked if I'd be willing to be interviewed for her column. I hope to see profiles of more distance learners soon. I know there are a lot of us in the US. Because of the interview being published on Wales Online, numerous people have contacted me. I'm now in contact with a Brecon historian, was asked to do a radio interview in Welsh about my passion for football (maybe in another year!), and have a new weekly standing meeting to speak Welsh with another learner right here in Austin. The internet has made the world very small in a lot of ways, and I'm finding that the Welsh internet is especially tight-knit. It's nice.

AmeriCymru: What's next for Susan Floyd? How do you intend to further pursue your Welsh studies?

Susan: I'm going to continue with the AmeriCymraeg class as far as possible, and I hope to do an intensive wlpan in Wales sometime this year or next. I'd like to do two full weeks. I'm leaning toward Nant Gwrtheyrn, but suggestions are welcome! Just trying to save up the money.

Susan: I think I've said enough. The most important thing is to never give up! And come say hi on Twitter at @Texarchivist.