Dale and Lucy are two students with an interest in the supernatural. One weekend, they travel to Sker House, South Wales, a private residence with a macabre history which has recently been converted into a seaside inn. They plan to write an article for the university magazine about a supposed haunting, but when they arrive, they meet a landlord who seems to have a lot to hide. Soon, it becomes apparent that all is not well at Sker House. An air of opression hangs over it, the true depth of the mystery going far beyond a mere historical haunting. This is a place where bad things happen, and evil lurks. Little by little Dale and Lucy fall under Sker's dark spell, and as they begin to unravel the secrets of the past, they realize they also have to do battle with the ghosts of the present.

Welcome to Sker House , a place where fact and fiction collide.

On a recent work trip away in L.A. I took a day off and realised that I was confined to my motel room all day with nothing to read. Or so I thought. Checking my inbox I found a review copy of C.M. Saunders excellent 'Sker House'. I began reading and finished the same day!

It's addictive.... a real page turner. It will not scare the pants off you, although there are some eerie passages earlier on, but, it will keep you massively entertained throughout. Think 'ripping yarn' or 'H.P. Lovecraft meets Indiana Jones'.

The Indiana Jones connection is alluded to at one point in the narrative when the guests and staff of Sker House make their final stand against the other worldly horrors which infest the place:-

“This is beginning to turn into an Indiana Jones movie,” said Lucy, who seemed increasingly unimpressed with all the problem-solving.

“In that case, I hope it doesn't turn into the Last Crusade,” said Dale.

“Why? Does the hero die in that one? I haven't seen it,” said Lucy, feigning interest.

No fear of that! The final scenes, set in the catacombs beneath Sker House, combine comedy and drama with perfect pace to provide a satisfying and thrilling denoument to the creepy capers that precede it.

If you like your ghost stories with a generous side of humor then this book is definitely for you. Sker House landlord James Machen (an allusion, no doubt, to Welsh master of horror fiction, Arthur Machen) entertains us frequently with his wry observations. The alcoholic Welsh landlord, down on his luck and teetering on the edge of bankruptcy, reveals the sad story of his associaton with Sker in a series of drunken soliloquies. At one point he asks himself:-

"What was it Richard Burton said? Show a Welshman a million exits and he'll always choose the path to self-destruction. Or was it Anthony Hopkins? Maybe they both said it. Whatever. It sounded about right."

All in all I have no hesitation in recommending Sker House to anyone who has a sense of humor and a taste for the supernatural. With summer vacation time looming this book is a perfect accompaniment for long plane or train journeys and ideal for a lazy day at the beach. 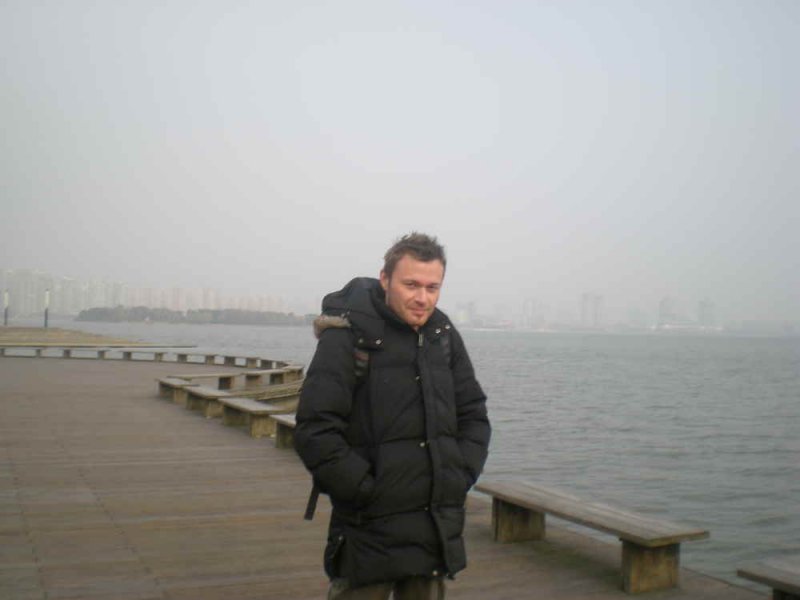 AmeriCymru: How would you describe your latest novel, 'Sker House'?

In a nutshell, it's a traditional haunted house story with a contemporary twist and a distinctly Welsh flavour. Sker House is an actual location, near Kenfig on the south Wales coast. When I was a kid I used to go on family holidays to Porthcawl and Sker was a regular haunt, excuse the pun. It was in ruins then – the house been refurbished since – and there was just something about the place. There are loads of local legends and ghost stories connected to it. I thought about it a lot over the years, and always toyed with the idea of writing a book about it. When I was living in China a few years ago I had some time on my hands and decided to tackle the project head-on. During the research phase, I found that the truth is even stranger than the fiction. Of all the historical sites in Wales, Sker House is probably the most deserving of having a fictionalized book written about it. It's also one of the lesser-known sites. One of my aims was to share the story of Sker with a wider audience.

AmeriCymru: You have written many horror shorts for magazines, anthologies etc. What attracts you as a writer you to the horror genre?

I don't really know. It probably comes from being a huge Stephen King fan and being addicted to TV shows like Tales From the Crypt and Outer Limits when I was a kid. If I sit down to write, what comes out is naturally dark. Most of it has a little injection of humour, which unfortunately goes over a lot of people's heads. Writing dark fiction is also a bit of a release. My day job is writing about sport and lifestyle for magazines. I love my job, and consider myself lucky to be able to do what I love for a living, but as with most day jobs, it gets a bit monotonous at times. There's a lot of ticking boxes, writing stuffy corporate stuff, and trying to make uninteresting things sound interesting. My style, and what I write about, is largely dictated by the client or the readers. When I write fiction, I don't write for an audience, I write for myself. That's one reason why I turned to indie publishing a couple of years ago. I like the creative freedom. I control everything from the content and the cover design to the pricing, which has been a big sticking point with publishers in the past who always insisted on pricing my books way too high.

AmeriCymru: What can you tell us about your 2003 title:- Into the Dragon's Lair: A Supernatural History of Wales?

That was the first book I ever had published. Having left school with no qualifications, I was working in a packing factory in Rhymney. After my shifts I'd go home, research and write about local myths and legends. Partly because I wanted to identify more with Wales, and partly because I was just interested in the subject matter. When people asked what I did in my spare time I'd tell them, but nobody ever thought it would lead to anything, least of all me. I dreamed about being able to leave that factory. After six or seven years work, I polished the manuscript up and sent it out to about a dozen publishers. Most never replied, and the ones that did turned it down. The very last name on the list was a small Welsh publisher called Gwasg Carreg Gwalch, who liked it and agreed to take it on. It caused quite a stir when it came out, there were newspaper and radio interviews for which I was wholly unprepared, but it won the attention of the Welsh Arts Council who got behind it and I ended up getting a grant to go to university as a mature student. Since then, I've had to pinch myself every day. I am living proof that if you put your heart and soul into something, you can achieve anything.

AmeriCymru: You are also a Cardiff City fan and you have written a history of the club. Care to tell us a little more about this?

That was something I started when I was in university, again as a kind of pet project just because I wanted to know more about the club. Their history is fascinating. They are the only club to ever take the FA Cup out of England, and remain the only football club in the world to ever hold the national cups of two different countries at the same time by winning the Welsh cup the same year (1927). There's a great old photo of the then-captain, Fred Keenor, with the FA Cup in one hand a fag in the other. How the game has changed!

It's not always enjoyable, but supporting Cardiff is never boring. The first game I ever saw was a 1-1 draw with Barnet in the old Fourth Division in 1992 (I think), and I went down to Ninian Park quite regularly until I moved away in 2003. I finished the book in 2007, but couldn't find a publisher for it at the time. Then, when the club won promotion to the Premier League in 2012/13, I had another go and lo and behld, there was more interest this time around.

AmeriCymru: What's next for C.M. Saunders. Any new titles in the works?

I took a huge leap recently and scaled down my day job to pursue fiction. Not 100% of the time, but now I do about half and half. I thought if I don't do it now, I never will. I have a new novella coming out in the summer called No Man's Land, a horror story set in the trenches of World War I. It's the centeniery of the Battle of the Somme, so I'm planning on giving the proceeds to a veteran's charity. My main project at the moment is an adventure series for young adults about a character called Joshua Wyrdd, who finds a magic amulet in a rock pool in Anglesey which transports him through time. I've always been a history buff. The books are written in such a way that they aren't just adventure stories, but are also at least partially historically accurate, so they can be used as educational tools for kids. The first book is about the Roman invasion of Angelsey and the Final Battle they had there with the Celts and the druids, while the second is about pirates and sea monsters and the third will be about the witch trials.

The bond Welsh people have, wherever in the world they travel, is something that never ceases to amaze me. If I ever see a Welsh jersey in a random bar in Hong Kong, or anywhere else, I know I'm looking at a friend. We just seem to have an affinity with each other, and that is something to be cherished. I'd also like to thank Americymru, and it's members, for all their support. It truly means everything. Diolch!


Diolch for a great interview Christian