Rebels of Babylon by Owen Parry - A Short Review 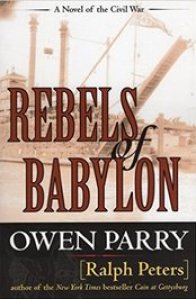 This is a great read! It has every variety of chase sequence that 19th century technology will allow, black magic, voodoo and even zombies! I have often thought that Shakespeare suffers from a lack of zombies but Owen Parry knows that good literature cannot be without them.

This is the sixth book in a series that features Major Abel Jones, Welshman, British army and American Civil War veteran and investigator extraordinaire. As ever, Major Jones is directly commissioned by Abraham Lincoln and in this instance his mission is to investigate the murder of Susan Peabody, a Northern abolitionist, in New Orleans in 1863.

Owen Parry`s works have been described elsewhere as "well-researched entertainments" and it is difficult to resist his vivid depiction of war-torn New Orleans. The city is imbued with an atmosphere of decadence, mystery and intrigue which acts as a perfect foil for Major Jones' swashbuckling adventures.

Perhaps the most interesting feature of these books is the character of Jones himself. Jones is in many ways a stereotypical 19th century Welsh Methodist, albeit with an almost superhuman gift for self-preservation. He is aloof, self-righteous, judgemental and pompous almost to the point of arrogance. He never misses a chance to air his prejudices, particularly where the Irish are concerned. But for all that he is a likeable character who frequently fails to live up to his own very high standards and is entirely capable of self-criticism.

This book is a first class entertainment for the lover of historical fiction and an ideal companion for a long journey.

Owen Parry is a nom-de-plume of Ralph Peters who writes about political and military matters under his own name. Whatever one may think of the political opinions expressed in his more serious works, it is undeniable that he is a fine writer of historical adventures. It is also difficult not to sympathise with the sentiments expressed in the dedication to "Faded Coat of Blue" ( 2002 ),one of the earlier Abel jones mysteries:-

" To the Welsh, Scots, and Irish who built America while the English weren`t looking"