'Snowdon: The Story Of A Mountain' by Jim Perrin, A Review

Ceri Shaw » Blog » Book Reviews » 'Snowdon: The Story Of A Mountain' by Jim Perrin, A Review

If you only buy one book about Snowdon in your lifetime make sure it's this one!

It is clear throughout that the author has enjoyed a peculiarly intimate lifelong relationship with Eryri and never more so than when he recounts his plan for a trip around the mountain in the opening chapter:-

"The late Showell Styles, one of this mountain regions most ardent and articulate devotees, in a charming, knowledgeable,garrulous book,The Mountains of North Wales, proposed that you should do just this as a rapid, minds-eye journey,a girdling of the mountain at a distance of a mile or a mile and a half (no kilometric nonsense for old Showell) more across them. When I started to plan this book, Showells idea grew on me.Why not follow the circuit of the peak not just rapidly and in the minds eye, but lingeringly and in reality?"

Starting out from the Miner's Track the author circumnavigates the mountain describing its many faces as he goes. It quickly becomes clear that he is familiar with every path and rock face along the way, indeed we learn that he has been visiting and climbing Snowdon since he was a boy. But the account never descends into mere personal reminiscence as we are regaled with details about the mountain's topography, wildlife, history and folklore and there are constant allusions to the delights which await in later chapters. It also becomes clear that Jim Perrin enjoys a comprehensive knowledge of the climbing routes to Snowdons summit, a theme which is explored more fully in the books final chapter 'Colonising The Vertical' 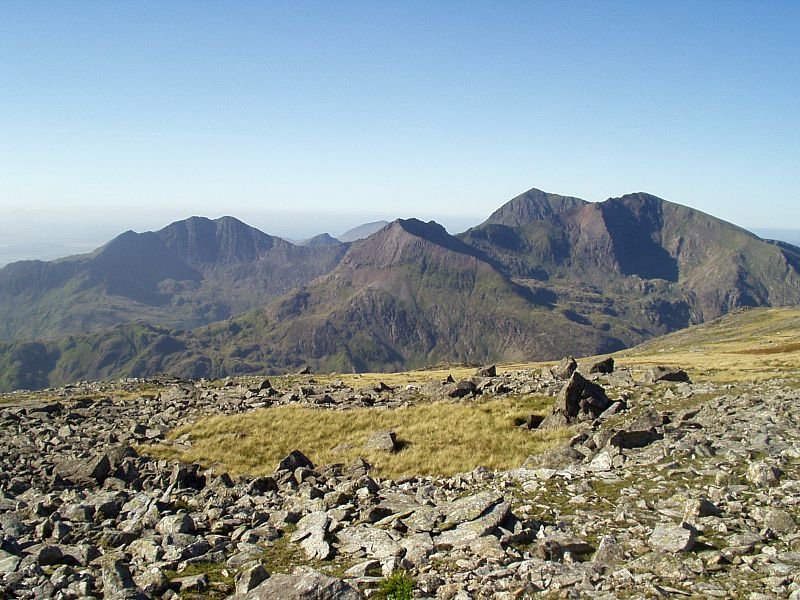 Chapter Two delves into the rich mythology and folklore which wraps its mantle around Snowdon like an ancient mist. Here we learn about the 'Lady Of The Lake', a story common to both north and south Wales, which hints at early and tragic encounters between Bronze and Iron age cultures. We are also introduced to the 'afanc' of Glaslyn, the giant 'Rhita' and the cave of the hairy man (Ogof y Gwr Blewog ). The account of this 'triad of grotesques' is supplemented with Arthurian legend and tales of Merlin and Dinas Emrys.

The Snowdon massif was the final and most formidable bastion in the concentric array of mountain ranges which guarded the granary of Ynys Mon and the Kingdom of Gwynedd. Its importance as a natural fortress in the cultural consciousness of the Welsh people is discussed in Chapter Three.

Subsequent chapters examine the mountain from the perspectives of antiquaries, cartographers, artists, art historians and modern tourists and local inhabitants. The final chapter deals with rock climbing routes on Snowdon and the history of their discovery and development. It should come as no surprise that Jim Perrin gives us an authoritative account here, since he has written extensively on rock climbing in Britain and with particular reference to the Welsh mountains and Snowdon ( see this page - Jim Perrin search results - for further titles )

Jim Perrin's treatment of these themes is richly detailed and massively engaging throughout.

This is truly 'the story of a mountain'. The next best thing to being there!