Americymru: Your first published collection of poems Lull of The Bull has been very well received and reviewed. Do you have any further works in preparation?

Paul: I am currently working on another collection of poems, provisionally entitled "My Enclave". I hope that this will appear in the summer of 2011. It will be a more claustrophobic, introspective, partisan and surgical work than my debut.

Americymru: Care to explain the significance of the title - "Lull of The Bull"?

Paul: Firstly, I consider it to be internal poetry in a small way in itself, almost musical in a Middle Eastern by way of West Wales route. Secondly, I live in a rural area and am of farming ancestry but have no practical experience of this former family lifestyle like many of my contemporaries though we are surrounded by farms our families used to own. Thirdly, it could be a comment on artificial insemination, emasculation, enforced celibacy and the changing roles of both genders, more pertinently the male in this case. Essentially, I don't really know. I just write the stuff, waiting for shapes to appear in a log jam of words. I like the look and sound of it like a magpie might. I prefer the reader to reach his or her own conclusions.

Americymru: For my money one of the most interesting and powerful poems in the collection is:- "I Opened My Mouth and Set Free Twenty Thousand Demons Who Had Accompanied Me Thus Far" Can you tell us a little more about the poem?

Paul: This poem is the result of a planned one hour session of instant writing, all the baggage of that moment saved up for one Friday midnight. This partly explains its apparent randomness and disconnectedness and it is a precursor of much of my present favoured method of writing. The title refers to a cathartic process which is ongoing. I guess that some of what I write makes no linear sense which is how I and the Druids like it.

Americymru: I must ask you about 'Bombstar' . A great poem and a strong lyric. Was it written with musical adaptation in mind? Do you plan to adapt more of your work in the future?

Paul: "Bombstar" was not written with musical adaptation in mind. I would like to collaborate with more songwriters as I feel this is an exciting way of presenting my words.

Americymru: What significance does 'Y Gododdin' have for you personally and in your writing?

Paul: That epic poem speaks to me of a different, heroic age. It describes a glorious, doomed raid on the invader at a time when Wales could have been independent had it been united or even existed, a recurring theme. I don't dream of going back there that often but sometimes feel an outsider in my own land . The stylised depictions of weapons, armour and carnage have informed some of my own imagery as has my own personal collection of edged weapons, itself a response to that age, that poem. 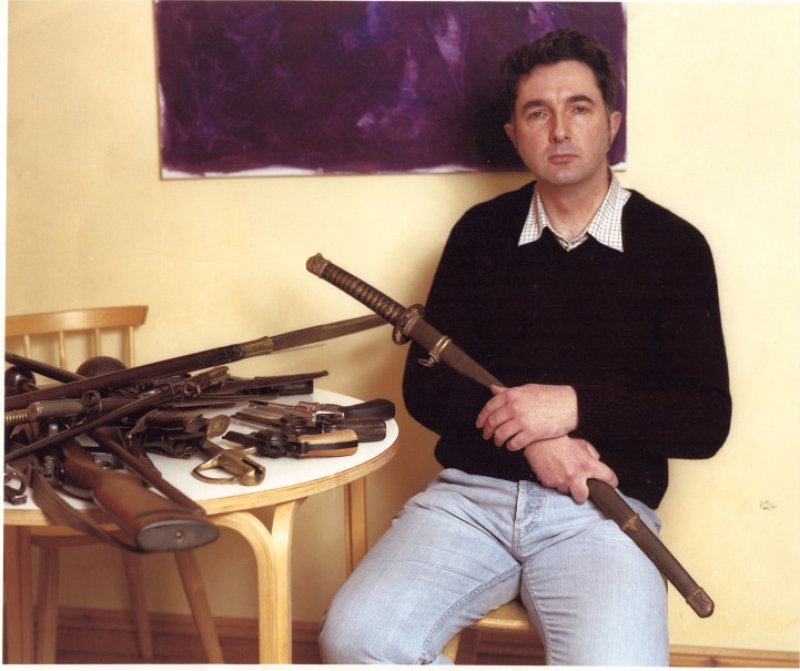 Americymru: On your website there are a number of short stories. Is this a genre that you plan to explore further?

Paul: I am interested in exploring the short story genre more fully. Ultimately I'd like to publish a collection of short stories but that's some time off.

Paul: I intend finishing "My Enclave" as soon as possible and ensure it doesn't turn into a sort of "Gangster Gododdin"! I am experimenting in poems culled from excerpts from magazines. I'm eager to resume writing in Welsh. I will be involved in industrial action against Government cutbacks soon, no doubt. I hope to pick up a long story called "Lovetown" I'm not writing and do more photography, using it differently. I have a number of poetry readings in Pembrokeshire in the coming months and have ambitions to take the poems overseas. Oh, and some romance and adventure would not go amiss, either.

Americymru: Any final message for the members and readers of AmeriCymru?

Paul: Lull of the Bull is available at starbornbooks.co.uk . I'm glad to be on Americymru and am delighted at the interest shown in my country. I am a Welsh speaker and am happy to receive communications in that language.