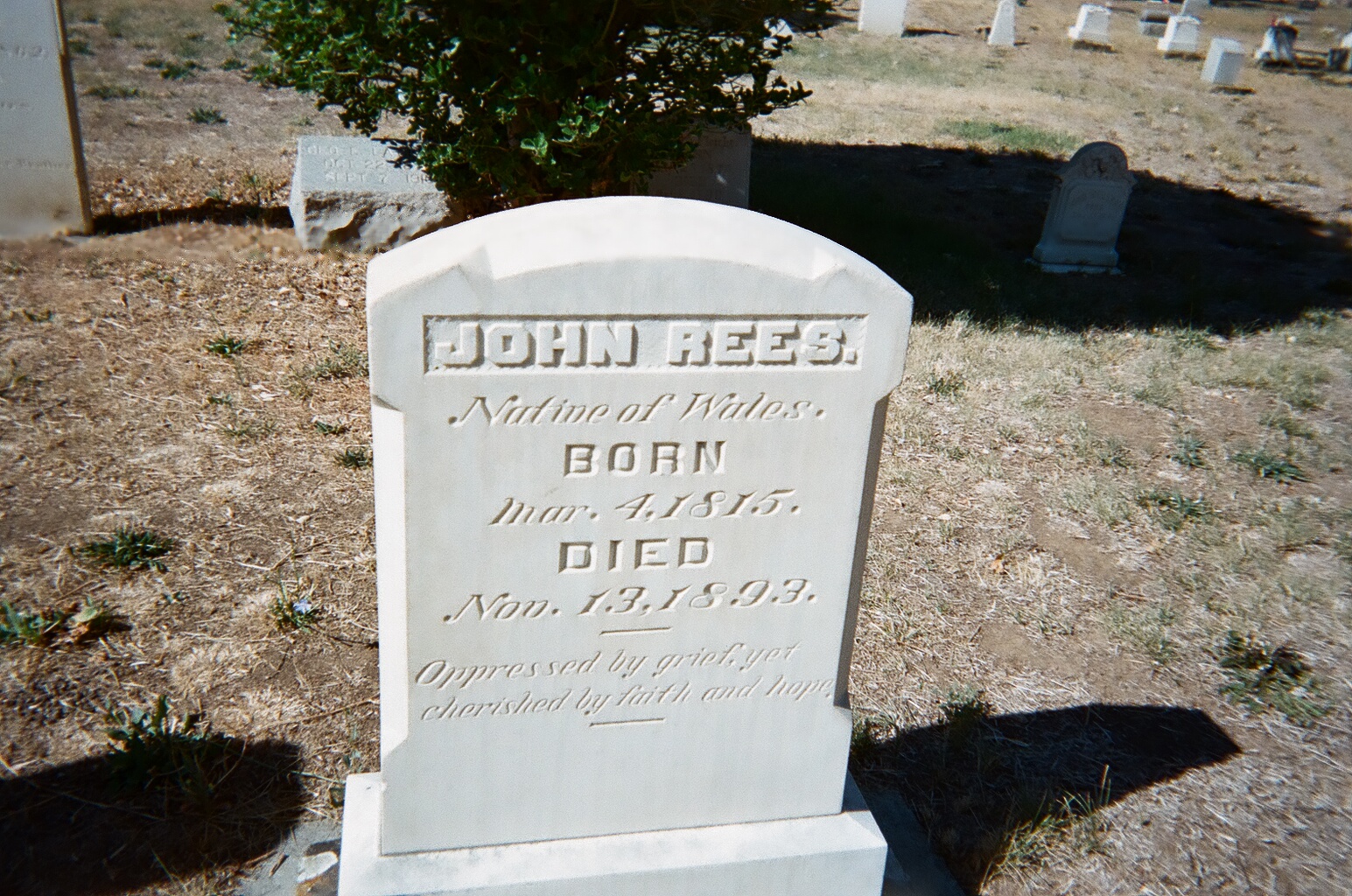 On my return trip from the West Coast Eisteddfod in L.A. in 2011 I was able to break my journey in Hornbrook, CA   and take some pictures of John Rees's grave and final resting place. Given that we know he was a stonemason in his youth, did he perhaps make it himself? Certainly it is one of the finest and best preserved monuments in the cemetary.

John Rees ( aka Jack the Fifer ) is topical because today ( Nov 4th ) is the anniversary of the ill-fated Chartist march on Newport in which he played a leading role..

The debate as to whether violence can be a legitimate method to secure political ends was one that occupied many physical and moral force Chartists in the 1830's and 40's. John Rees was a 'physical forcist'.

But why is the man who led the vanguard of an armed insurrection in South Wales buried in a small town in Northern California? Read on:-

Review of John Humphries 'The Man From The Alamo'

Everybody remembers the 5th of November - 'gunpowder, treason and plot', but what about the 4th? On this day in 1839 the last armed rising in British history took place in Newport , Gwent, South Wales. The following article is a review of a fascinating book, "The Man From The Alamo" by John Humphries. The book is, amongst other things, a partial biography of John Rees a.k.a Jack The Fifer, a hero of both the Texan War of Independence and The Newport Rising of 1839 . 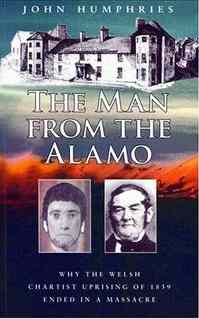 John Humphries' "The Man from the Alamo" does not have much to say about that historic conflict, indeed Davy Crockett is only mentioned once, briefly, on page 91. What it does have to say, however, goes a long way toward answering some of the most intriguing questions about John Rees, a great Welsh-American and man of mystery. Much more can now be said of him than was possible before Mr. Humphries' painstaking research.John Rees ( a.k.a Jack The Fifer ) was born in Merthyr Tydfil in 1815 and died in Hornbrook , Northern California in 1893 . Sometime before he was twenty he immigrated to the United States. He was 20 years old when he volunteered for service with the Second Company of the New Orleans Greys in October 1835. Born of working class parents in South Wales in the early 19 century it is likely that he endured the almost obligatory period of child labour in one of the many local collieries or Ironworks . Given that he was an accomplished fife player it is also possible that he saw some military service with the British army in his teens.

He took part in the siege of San Antonio De Bexar in 1835, and fought at the battle of Coleto Creek in 1836. Following the capture of Colonel James Fannin's command after the battle he was one of only 28 survivors of the infamous Goliad massacre in which more than 300 Texan prisoners were killed. He was later recaptured and spent the rest of the war as a prisoner . After the Mexican defeat at San Jacinto he was released in April or May, 1836. Upon his release he rejoined the army and was honourably discharged later that same year. The traditional account of his subsequent activities has been largely undermined by the books author. It was long thought that John Rees collected his back pay and land-bounty entitlements and returned immediately to Wales where we know that he was employed as a mason at the Tredegar Ironworks in 1839.

The book adduces substantial evidence to suggest that John Rees claimed not one, but several land bounty entitlements and that he spent the better part of two years actively swindling the infant Republic of Texas which he had recently fought so bravely to establish. Lest anyone should think any the less of him for this, it must be pointed out that he was not alone. Submitting bogus land bounty claims was a very prevalent and fashionable vice amongst ex-soldiers of the Republic at this time; rather like cocaine abuse in the 1980's and wife-swapping in the 1970's.

Upon his return to Wales Rees almost immediately became involved in the Chartist movement which at that time was agitating for the acceptance of the famous Six Points listed below (1). He played a key role in the bloody events of the 4th of November 1839. It lies beyond the scope of this review to recount the details of the rising but the following link may help with the background details:- The Newport Rebellion 1839 . There are almost as many theories concerning the intentions of the marchers at Newport as there are books on the subject. Some of the most important works are listed in the footnotes (2). Mr Humphries book seeks to examine the events from the perspective of the role they played in the lives of two of the leading participants. More than fifty percent of the book deals with the life of Zephaniah Williams, a prominent Chartist leader, and the chapters dealing with his subsequent trial and transportation are indeed fascinating but the major premise of the work is that it was John Rees who assumed the mantle of leadership at the key moment on that fateful day.

There has been much debate concerning the intentions of the marchers. It has been suggested that the original plan for an armed insurrection had been amended and that nothing more than a peaceful demonstration was intended. If so, did John Rees acquiesce in the change of plan? Did John Rees fire the first shot at the Westgate and if he did was he acting unilaterally or with the full premeditation of the other Chartist leaders? What is certain is that he was at the head of the column as it approached the hotel and that he was accompanied by a hundred or more men armed with muskets, shotguns and assorted firearms ( most of the marchers were armed with pikes). It was John Rees who , pistol in hand, demanded the release of the Chartist prisoners held within , a demand which precipitated the bloody melee in the hotel foyer. This in turn prompted the soldiers secreted in the hotel lobby to throw open the shutters and fire into the tightly packed crowd in the street outside.

Whatever his intentions, his actions led to a charge of high treason being brought against him and a reward of one hundred pounds being offered for his capture. John Rees escaped to Newfoundland and subsequently to an unknown location in Virginia thus avoiding the awful fate of John Frost, Zephaniah Williams and William Jones who were captured, tried, found guilty of high treason and ultimately transported to the British penal colonies in Tasmania. The details of his escape are recounted by none other than John Rees himself! In 1841 he wrote two letters to the editor of the Cambrian newspaper in west Wales. They were not published until 1844 . Humphries quotes extensively from these letters and it is from them that we know that Rees settled in Virginia for a period of five years where he stayed with unidentified friends.

In 1846 we find him back in Texas serving with the military; this time with the Texas Rangers. It is highly likely that he was captured and subsequently released at a very early stage in the U.S-Mexican War of 1846-48. He emerges in late 1846 in Matamoros, Mexico doing one last "shady" deal which involved the sale of his last remaining land donation certificate. This transaction was fraudulent because the certificate in question could not legally be sold during the recipient's lifetime.

For the rest of his life Rees almost certainly lived in Northern California to which he was drawn by the initial fervour of the California gold rush . At some point he became an American citizen and he appears on both the 1870 and 1880 census. He died of natural causes in Hornbrook in 1893.

In conclusion it must be said that John Humphries has written a very powerful book about two extraordinary men. John Rees was a great Welsh-American who was a hero, of sorts, on both sides of the Atlantic. His remarkable penchant for placing himself in difficult and dangerous situations was only matched by his genius for self-preservation. It is to be hoped that much more remains to be discovered about the life of this colorful and admirable character
.
The book may be purchased here The Man from the Alamo

(1) This version of the Six Points is taken from a contemporary leaflet featured in British Working Class Movements: Select Documents 1789-1875 edited by GDH Cole and AW Filson (Macmillan, 1951).

1. A VOTE for every man twenty one years of age, of sound mind, and not undergoing punishment for crime.
2. THE BALLOT .--To protect the elector in the exercise of his vote.
3. NO PROPERTY QUALIFICATION for members of Parliamentthus enabling the constituencies to return the man of their choice, be he rich or poor.
4. PAYMENT OF MEMBERS , thus enabling an honest tradesman, working man, or other person, to serve a constituency, when taken from his business to attend to the interests of the country.
5. EQUAL CONSTITUENCIES , securing the same amount of representation for the same number of electors,--instead of allowing small constituencies to swamp the votes of larger ones.
6. ANNUAL PARLIAMENTS , thus presenting the most effectual check to bribery and intimidation, since though a constituency might be bought once in seven years (even with the ballot), no purse could buy a constituency (under a system of universal suffrage) in each ensuing twelvemonth; and since members, when elected for a year only, would not be able to defy and betray their constituents as now.

(2) Two of the most important and recent works on the Chartist Rising.