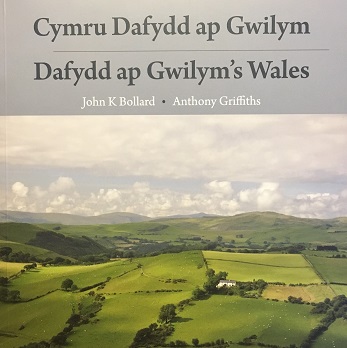 John: Cymru Dafydd ap Gwilym / Dafydd ap Gwilym’s Wales is a collection of 35 poems by one of the greatest Welsh poets. The original Welsh texts are presented with facing translations in English, along with a bilingual introduction, with notes to explain unfamiliar names and words, a short essay on Dafydd’s life and poetry, and an even shorter introduction to the complex ‘strict metres’ in which Dafydd composed his poems. A unique feature of this book are the 70 photos by Anthony Griffiths showing places that Dafydd mentions in the poems. If you do not live in Wales or can not travel over much of the countryside – as Dafydd himself did – these photos give a wonderful visual sense of the land in which he lived.

AmeriCymru: Dafydd ap Gwilym is "regarded as being one of the leading Welsh poets and amongst the great poets of Europe in the Middle Ages." How would you describe his importance in the context of Welsh and medieval European literature?

John: The ancient Welsh tradition of court poetry under royal patronage was, in effect, eliminated after the deaths of the last ruling Welsh princes, Llywelyn ap Gruffudd and his brother Dafydd, in 1282 and 1283 during their disastrous wars against the English king, Edward I. The royal and noble patrons of the court poets were killed in battle, executed, or, at best, deprived of their lands and wealth, while their wives and daughters were exiled to nunneries in distant parts of England. After a dark period of grief, the poets turned for support to the less prominent Welsh families who had become the intermediary officials who simultaneously administered the newly imposed English laws while they did their best to protect the Welsh people from the worst extremes of oppression. Thus, the practice of praise poetry continued, but on a reduced scale.

Dafydd ap Gwilym was born sometime in the early fourteenth century, and he himself tells us that he learned much about poetry from his uncle, Llywelyn ap Gwilym ap Rhys, constable and bailiff of the castle at Newcastle Emlyn. As poetry reasserted itself, albeit with shifting functions and purposes, Dafydd and a few other young poets began to turn towards new themes. Dafydd soon took the lead, especially as a love poet. Love poetry had been rare in Welsh tradition, though it was growing popular in the courts of France and England. Dafydd took love as his theme and adopted it to Welsh metres, creating a style that is unlike French and English courtly poetry. He and his fellow poets molded the cywydd to their new voices, embedding it in the complex set of rules known as cynghanedd (literally, ‘a singing together; harmony’). They did not invent cynghanedd, but they refined it, codified it, and made it an inextricable part of their verse -- poetry in which sound is as important as sense.

Dafydd was a master of the traditional forms of praise and religious poetry, as attested by 25 or so surviving poems. But he took the cywydd to new heights with about 120 poems that, for the most part, explore the joys and sorrows, frustration, pain, and hope of love. He casts himself in the role of the lover, especially one who is, more often than not, rejected by the object of his love, or who is prevented from reaching her because of such impediments as the weather, geography, furniture in the dark, outright rejection, or even the fact that she is married. Through this essentially comic persona, however, Dafydd expresses and celebrates the various aspects of love and the complexities of personal relationships. At the same time, with his detailed, charming and perceptive observations on the birds, animals, trees, rivers, hills and valleys of Wales, he reveals an intimate engagament with and love for the world around him. And he is equally perceptive about human feelings and foibles, often expressed with a sardonic wit at his own expense. Dafydd’s verse may not have been known very far beyond the borders of Wales, but his substantial body of innovative poetry shows him to be the equal of his more widely recognized contemporaries: in France, Guillaume de Lorris (whose famous Romance of the Rose he may have known); in Italy, Boccaccio and Petrarch; and in England, the somewhat younger Geoffrey Chaucer. 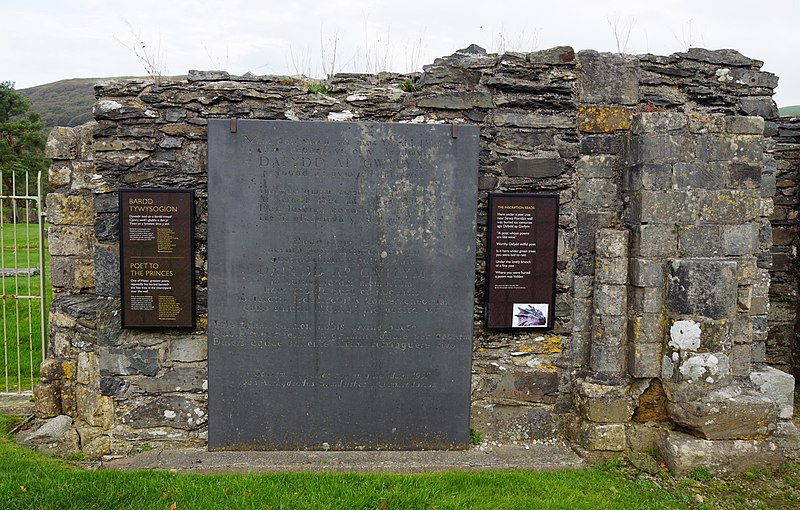 Otter [ CC BY-SA 4.0 ], via Wikimedia Commons AmeriCymru: Dafydd has been rated as an innovative poet particularly for his use of the 'cywydd'. In what sense/s do you regard Dafydd's work as ground breaking?

John: As a more general addendum to my comments above, I would say that not only was Dafydd an important voice in revitalizing Welsh poetry after a period of severe cultural stress, he was a central figure in the expansion of the popularity of the cywydd, not only for love poetry, but for other purposes, as well. His cywydd to his patron, Ifor Hael, thanking him for a pair of gloves is the earliest-known Welsh poem of thanks, a practice that spread rapidly over the next two centuries. And Dafydd and his friends composed elegies to each other (even before they died!), demonstrating that the cywydd was also suitable for expressions of grief and mourning.

Dafydd’s superiority was recognized by other poets in his own time. Gruffudd Gryg says, “I am his disciple, he taught me,” and calls him “the hawk of chief poets.” Madog Benfras calls him “the peacock of poetry,” “the nightingale of Dyfed,” and “a good teacher of poets, more exceptional / than anyone who ever lived.”

AmeriCymru: Do you think that Dafydd's poetry is sufficiently read, understood and appreciated in Wales today?

John: Unfortunately, poetry in general seems not to be as widely read as it used to be, even in Wales, where not long ago teenagers decorated their rooms with posters of middle-aged men and women, their contemporary poet-heroes. Nevertheless, it is notable that Dafydd ap Gwilym is still recognized in Wales, at least by name, after 650 years! A small handful of his comic poems, such as Merched Llabadarn “The Girls of Llanbadarn” and Trafferth mewn Tafarn “Trouble at an Inn” are fairly well known, but he is not what you might call widely read these days. To be fair, his poetry is not easy to read – though I hasten to add that it amply repays the effort. And even reading his verse in translation can be enlightening as well as entertaining.

Personally, I think it is no less important for an educated Welsh person (Welsh speaker or not) to know the poetry of Dafydd ap Gwilym than it is for English speakers to be familiar to some extent with Shakespeare, Chaucer, Milton, or Donne.

AmeriCymru: You are an expert in medieval Welsh. Care to tell us a little about the ways the language has changed/evolved since that period?

John: With a bit of study and practice, a dedicated, fluent Welsh speaker can read the Middle Welsh prose of The Mabinogi and other early tales. There are, of course, many words that are no longer in use, so editor’s notes and a good dictionary may be necessary. The experience, I like to think, is not unlike an English speaker today learning to read Chaucer. Early Welsh poetry is more difficult for a number of technical reasons, but such is the nature of poetry. To outline changes in the Welsh language over the centuries would take more time and space than is available here, so I will limit myself to some very general thoughts.

However, much greater social and cultural changes have affected the Welsh language during the past 150 years than in the five preceding centuries. In the mid-to-late 19th century most of Wales was monoglot Welsh speaking, much as it was in Dafydd’s day. But English government policy and the institution of compulsory education in English reduced the proportion of Welsh speakers overall to less than 25% during the course of the 20th century. The protests and activism of the 1950s and ’60s eventually achieved official governmental recognition for the language. Mudiad Meithrin, the Nursery (Schools) Movement begun in the 1970s was the inspiration for the establishment of Welsh medium schools throughout Wales, and today the study of Welsh is required in many schools. Nevertheless, the percentage of Welsh speakers continues to fluctuate around 19-22%, and the language remains in crisis. Official use of the language and the ability to receive an education through the medium of Welsh should at least slow down the decline, and with luck, determination, and effort it could even be reversed. The pressures from a powerful dominant culture, however, are great, so it is hard to avoid the feeling that the future of the language is precarious at best.

AmeriCymru: In your 'Legends & Landscapes of Wales' series you have produced new translations of the most important Welsh legends and 'foundation texts' ( 'Tales of Arthur' , 'The Mabinogi' , 'Companion Tales to the Mabinogi'). What can you tell us about this series and where can readers buy the books online?

John: The three volumes that you mention (published by Gomer Press), contain translations of all eleven tales included under the mistaken title “Mabinogion” (a term I generally do not use). The first volume contains the Four Branches of The Mabinogi, the jewel in the crown of early Welsh literature, a work that everyone who comes from or feels an attachment to Wales should read. Companion Tales to The Mabinogi presents four wonderfully eccentric tales, especially “How Culhwch Got Olwen,” the earliest Arthurian tale and perhaps the most exuberant story you will ever come across, along with “The Dream of Maxen Wledig,” “The Story of Lludd and Llefelys,” and “The Dream of Rhonabwy.” Tales of Arthur gives you three tales of heroes who became important figures in the international tales of Arthur and his knights: Peredur, Owain, and Geraint. Each of these books is illustrated with about 60 photographs by Anthony Griffiths.

A strong impetus for studying these tales for many years, and especially for presenting them anew to English readers, has been my belief that they are all serious, sophisticated works of literature that deal with timeless themes of considerable importance. Far from being stories for children, The Mabinogi, for instance, draws on its mythological underpinnings to examine unflinchingly the complexities of right and wrong, of friendship, marriage, war, and the treatment (and mistreatment) of women.

These books, plus our fourth volume, Englynion y Beddau / The Stanzas of the Graves, are available on the usual websites (though sometimes at highly inflated prices). I recommend that you order them from your local independent bookstore – or, especially if you would like a signed copy, directly from me at https://sites.google.com/site/themabinogi/contactinformation .
AmeriCymru: What's next for John K. Bollard? Any new titles in the works?

John: There is no lack of projects on the front, middle, and back burners in my study, several of them in the realm of medieval Welsh prose and poetry. Whether there is to be a sixth collaboration between Bollard and Griffiths… well, we’ll see.

“Poetry makes happier both old and young, sick and hale.”