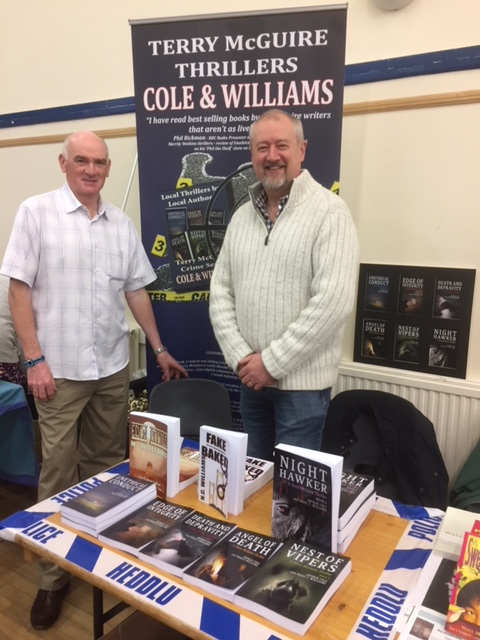 AmeriCymru: Hi Arthur and many thanks for agreeing to this interview. Care to tell us a little about your Welsh background and upbringing?

Arthur: I was born and bred in Caerau, a small mining village situated at the top of the Llynfi Valley, Maesteg. My father was a miner, as were many of my immediate family. I am the third of six children.

During the second world war my mother worked at the Bridgend munitions factory, until she married my father. We didn’t have a lot growing up, but our parents gave us all values and manners which stood us in good stead for the rest of our lives and careers. We had a very happy childhood, and at the time Caerau colliery was flourishing and there was plenty of work in the village, unfortunately the colliery is no longer, which is very sad indeed.

In September 1967, at the age of 17, I joined the Glamorgan Constabulary, which subsequently became the South Wales Constabulary in 1969. I retired from the police service as a Detective Sergeant in 1997 having investigated all form of major crime and counter terrorism. I then became a gardener. I worked mostly in nursing homes for individuals suffering with dementia. I retired completely in 2015.

AmeriCymru: When did you decide to write? What inspired you to take up the pen?

Arthur: After retirement I joined many coalmining sites on Facebook. One day I read a poem that had been posted. It was then that I decided to pen my first poem entitled ‘ABERFAN’ and from that day I haven’t stopped writing.

My main genres are Coalmining and the First World War, however I am able to pen poems about any subject.

My love of literature stems back to my time in comprehensive school, my biggest influence being my English Literature teacher Mr. David John, who was an inspiration, introducing me to all the war poets including Wilfred OWEN. Although I enjoyed poetry my career in the police service and my family took all of my time therefore I never did anything with the writing until I wrote ‘ABERFAN’.

AmeriCymru: What can you tell us about your collection:- 'An Industry Now Lost'?

Arthur: My first book of poems titled ‘AN INDUSTRY NOW LOST’ describes numerous mining disasters, and what it was like to work underground during the Victorian times, when lives meant nothing. I suppose you could say that my back ground growing up in a Welsh mining valley inspired me to write the 50 poem book.

AmeriCymru: How would you describe the effect of the loss of mining jobs in the Maesteg area and the valleys generally?

Arthur:  After the miner’s strike of 1985, the death knoll of mining in the Welsh valleys sounded, and all the pits were subsequently closed, leaving a great deal of unemployment and poverty, even to this day, some thirty odd years later the scars are there for all to see. Our valley towns have been decimated, and now younger generations have to travel far and wide for work.

AmeriCymru: You have also written a series of novels featuring Detective Chief Inspector Terry McGuire. Care to tell us a little more about the character and his cases?

Arthur: In February 2016, I was trawling through a closed Police site on Facebook, when I read a post from Nigel Williams, also a retired police officer and an author in his own right, who had self published books he had written. In the post he asked if anyone would like to write a book, so I thought to myself, I wouldn’t mind a crack at that, so I got in touch and we began corresponding over the internet. I wrote the first book ‘UNETHICAL CONDUCT’ in ten days and Nigel ‘polished it up’ and put it all together.

The first time I actually met Nigel in person was when he gave me the book. I had no intention of writing another book, until Nigel asked if we could write together. That day ‘The Terry McGuire Crime Thrillers’ were created.

Terry McGuire began as a Detective Inspector in the series and is now a Detective Superintendent. He is in charge of a major crime unit in South Wales and he has hand picked his team. McGuire is a workaholic, who must always get to the truth. He is empathetic with an edge about him. He is a family man with two grown up children who live abroad. He is supported by his long suffering wife Molly who loves him to bits.

People who have read the books, and know me say that McGuire is modelled on me, to some degree he is, however when I created him, I didn’t have that in mind. All the cases that McGuire and his team deal with are serious and steeped in murder and corruption, and the stories are mostly set in and around South Wales.

At present there are eight books in the series:-

Nigel and I are just editing the ninth in the series, ‘Ravwn’, which will hopefully be published later in the year.

AmeriCymru: You have donated the proceeds from some of your book sales to charity. What good causes have your readers supported by buying your titles?

Arthur: When we began self publishing the books, we donated the royalties amounting to around £2,000.00 to both ‘Marie Curie’ and ‘The Garnwen Trust’, Maesteg.

AmeriCymru: What's next for Arthur Cole? Any new titles in the works?

Arthur: In May 2017 I was lucky enough to sign a book deal with ‘Wordcatcher Publishing, Cardiff’ owned by David Norrington. David published my first two poetry books ‘An Industry Now Lost’ and ‘Poems for a Lost Generation - A tribute to those who fell in the Great War 1914-18’.

I have just completed my third book ‘50 Famous People’ which includes many famous Welsh people, which will be published in May this year.

Nigel and I have also signed a deal with David, who is in the process of re-publishing the first eight books in the Terry McGuire series. The books will have a more consistent professional presentation. The titles will not be changed, so that readers who have already bought them, will not purchase them a second time.

‘Unethical Conduct’ has recently been published on kindle, with a new cover. The paperback will hopefully be published within the next few weeks. All available via Amazon or from Wordcatcher Publishing.

Arthur: I would like to thank you Ceri, for giving me the opportunity to write about our literary exploits thus far, and hopefully members who may read the books will be able to enjoy and reminisce about their homeland.

The thriller web site can be found at https://terrry-mcguire-thrillers.com