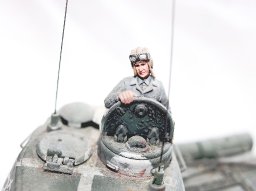 in his top secret militarised mind

I revisit my childhood bedroom

from drawing pins and fishing gut

how I made my own sky

with dioramas of dogfights

of Hurricane and Stuka

born of glue that got everywhere

until I gave them away to younger cousins

when I thought I ought to have outgrown them

(there were people who were still around then)

having returned to the wheat fields of Prokhorovka

amid the diesel and shell bursts

of the battle of Kursk

sinking back into those earlier times

of the Great Patriotic War

the faces of my brave toy soldiers

face each other in lines

their bayonets bent in the crush of packaging

loyal to me in outcomes I decide

I use part of my disposable income to rekindle

the fantasy campaigns of my childish days

in my camouflage under the radar

still at play in a world

in which my government is a supplier

of armaments that kill children


Diolch.  Maybe males are conditioned, partly through play, partly through their fathers influence, to be interested in weapons of war. Maybe it has always been this way. It was certainly my experience.  Glad to have pricked your conscience, cyfaill!


Yikes....your poem caused me to pause and reflect upon my YouTube viewing habits. I won't be able to watch Warthog Defence's latest updates on the F-35 saga or the Hawc missile project without an intensified feeling of guilt. What is it about military technology that we all find so blydi fascinating?