completed The (Intentionally) Lost Choir of the Mabinogi 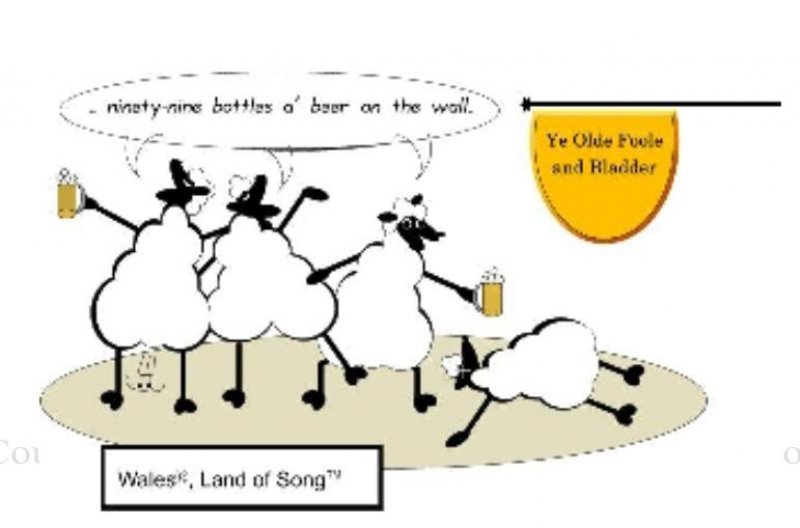 Clearing his throat...passing windand raising his baton, he spilled beer on a stranger whilst singing baritone through his nose. "Cwm Rhonddal, then!" mad Ianto spluttered. The tenors smiled. While they sang, a stranger appeared, gesturing grandly. He looked like the spitting image of Jones the Voice, sang in falseto while holding his lunchbox and flask very close to Blodwen the pianist tickling the ivories. 'That's not unusual!'... for Blodwen often tickled his ivories as a sideline to raising sheep in hard times. Then Ianto, batton up each nostril, sneezed, "I've H1N1 in my left foot and now there's woodworm in my trews!' He stammered, frightened, "Send for Rentokil or start singing! Pass the penicillin and a drop of 3-in-1 oil before I lose my wooden leg." Ianto lifted his trews and the atmosphere suddenly changed! Grown men wept, women all laughed and kids ran. The dog puked, but Ianto bravely asked them all “Where's the oxygen my trews need to sustain life?”Myfanwy ran to the running shop with white petticoat dragging through mud. "Fresh trews...urgent! And make them extra absorbent ...medium, roomy and airy -chic as hell, with shocking pink!" That's Abergwyngregyn fashion!

After donning his extra large underpants, playing with Velcro on his favourite pocket straps and stretchy, secret, taupe . . . He realised suddenly -that was his very secret, blackest reason to exist! He opened the gold coloured envelope decorated with stickers -to snap bra-straps and even more juvenile perversions like farting armpits. Who wears bras?? Only crossdressers and wrestlers with sagging deltoids -and big hairy armpits, love handles and man boobs -Haystacks Mawr! Was Daddy Mawr shy? There was little he could do; a half nelson that didn't work was beyond him. But a wrestler’s sweat drenched ‘underpants-triple-crotch-gripper’? I like that -and peculiar ‘helmet pile-driving body slams’!

Aye! It’s nice to sniff the locker-room sachets containing beads of body lint and fry them with peppered, vinegared bacon, specially prepared in gray eggplant smush -good for black-eyes, but even better for tenderloins. Wait one minute! What about the tender loins of Sumo wrestlers? They work even better -especially with sushi.

The baritone bellowed, “What about the chitlings of boar before our concert just to tune an octave lower than suppressed snarl?” The falsettos suddenly shrieked like eunuchs ‘til screeches ended and objects dropped; glass things fell as sopranos metamorphosed. Mixing their rallantandos, mezzo-baritones ‘acappelloed’ while spinning plates on conductors' batons at the same speed and pace.

The soloist opened his silky man-bag, revealing his pink and furry baton. Kinked shiny streamers adorned its tip, but the climax already occurred!

Mezzo-sopranos in miners’ helmets, singing bottombass, backing gracefully away -as did choirboys nervously twisting albs -whilst reaching ‘top c’, intentionally cracking voices and prematurely making utterances of the last of the Mohicans and the Arcadians.

With their pockets full, the aborigines filed corpus absentium papers!