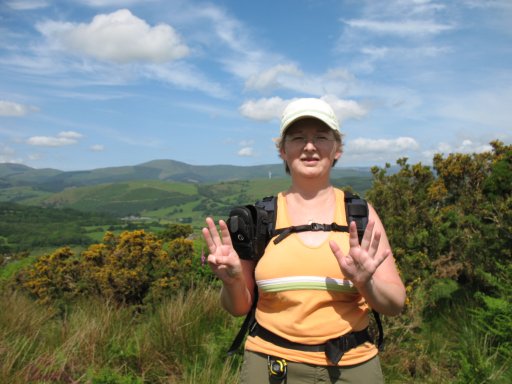 03/31/09 03:49:34AM @ceri-shaw:
Hope you got over the blisters ok. The Hatterall ridge is indeed a beatuiful place to be. In fact all those ridges in the Black Mountains have a magical quality to them.. Speaking of Hay on Wye and books...Owen Sheers stunning first novel "Resistance" is set in that area of the Black Mountains. Well worth picking up a copy for late night B&B reading. Are you getting any pics en route? If not here is one from the geograph project :- http://www.geograph.org.uk/photo/274309 And another from the wikimedia Commons:- http://commons.wikimedia.org /wiki/File:Black_Mountain_Top.jpg I must admit I dont know the border country further north than Hay. Looking forward to reading your account of it.

03/15/09 03:50:32AM @anadar:
The plane clip is almost exactly like being there! Thanx! That was nice!lol.. I know what you mean about the mountains in the States...and the vastness. I'm from Canada. I don't do / haven't done much hiking here either. Strangely enough, I don't find the appeal of hiking alone here that strong. Might do a day hike or two through the Gatineau's but that's about it. I've checked out some books on the Appalachian trail also..but the idea of bugs.. and bears! is a bit daunting...

03/11/09 02:37:41AM @ceri-shaw:
LOL....I remember the time I wrote to people back home telling them about my drive up to the top of Mt Paulina in the Newberry Volcanic Wilderness. I could imagine them all thinking...aye, he's gone native...started boasting about the size and scale of everything over there. But it just so happens that Paulina is 8000ft+ ( around about twice the size of Ben Nevis ) and you can drive to the top. We did it in a battered ten year old Ford Escort.

03/11/09 01:43:49AM @ceri-shaw:
I havent done too much hill-walking in the States. A little on the coastal range in Oregon ( Saddle Mountain ) and a few other walks in that area. The Cascades, Mt Hood, Mt St Helens are not hills of course, they are all whacking great volcanic peaks and I tend to get a bit overawed by them. Couple that with the fact that you sometimes have to hike through bear country to get to them and require an ice axe , rope and crampons to reach the summit and Ive got a few good reasons to stay home. Also it doesnt help that i havent moved away from my monitor for more than a few hours in the last year or so. I guess I'm a bit out of shape.....lol.When you get round to doing Snowdon do not allow yourself be tempted by the Crib Goch route. There is a lot of confusion about that. Some of the more blaise amongst the hill-walking fraternity back home like to describe it as little better than a walking route where you occasionally have to use your hands to steady yourself. It is NOT a walk, it is a grade III scramble ( or whatever the easiest grade is ) and if youre not prepared for it, it will scare the living daylights out of you. This I learned to my cost one fine day in August 1998 when I decided to test my head for heights. I thought that if I could handle the exposure maybe I could graduate to full fledged rock climbing. I failed the test. Oh..... I got across the thing alright but in the course of doing so I experienced a few varieties of sheer terror that were quite new to me. It took 12 or 13 pints to calm me down when I finally got back to Llanberis.Apart from that, hill-walking in Wales is delightful. I was always particularly fond of the less well known "tops" in the Elenydd in Mid Wales. Drygarn Fawr being a particular favorite.Anyhoo...I'm looking forward to your next post. Any talk of walking in Wales brings on the nostalgia and hiraeth for me. Walking the hills and sinking a gallon of ale in a country hostelry at the end of the day were my two favorite pastimes when I lived back home.

03/11/09 01:34:22AM @anadar:
Hmm. Strange I didn't write more that day. Looking back, there were lots of things. The day seemed like it went on forever and it was only a little more than 10 miles. It was my first ever long distance path though and only day 2. Today I could do that in half the time.I wouldn't recommend anyone ever getting Orthotics in their shoes only 3 hours before getting on a plane and then hiking 180 miles. Breaking them in wasn't pleasant. I had injured my foot shortly before the trip though (pulled the muscle that runs through the foot and up the calf) I wasn't sure I was going to be able to even make the trip. In the end, the orthotics were probably what enabled me to do the hike. But the calf pain wasn't nice and the antibiotics I was taking for the healing and the pain managed to give me bad kidney stones a few months after finishing the walk.I remember the pleasant walking through King's Wood.. nice and flat and a good break from the sun and the heat! Monmouth was busy. I've walked through it a couple of times now and it just gives me an strange, uncomfortable feeling.. hard to explain.The views from the Kymin were beautiful, blues and greens and mountains stretching out in the distance, the climb up to them a bit long from the Redbrook side. A good look at the hills to come in the next few days.The b&b was nice. I booked the trip through Celtic Trails who took care of all of the b&b booking and luggage transfers. All I was left to do was walk with a day pack as my luggage travelled ahead of me each day. It reminds me a lot of Terry Pratchet's first book and his walking trunk...I now walk with at the very least one 2L bottle of water and 1 or 2 Gatorade bottles and at least two chocolate bars tucked in my pack. I find for the first few days that I am not hungry at all and have a hard time making myself eat. But it is a must when hiking so far and doing so many hills. After day 3, the appitite comes back and I eat a full British breakfast each morning and a full supper at night. For lunch it varies. Sometimes only a chocolate bar and others a full packed lunch.

03/11/09 12:43:26AM @anadar:
Wow. That is so neat Ceri.. and good for you! A 2000 footer is no easy feat!Do you do any mountain/hill climbing in the States? I was able to spend a weekend in the White Mountains last year and managed a small 3000 footer but don't think I am fit enough to climb anything taller! Guess that makes me able to climb Snowdon though .. some year soon.I'm not sure how interesting my notes on the walking really are...(except for the naked people!) I wrote them so that when I could look at the pictures years later I would remember all of the little events and things that happened along the way. As I was alone on the trip, it feels a little strange to share them. But I will continue on.I would encourage anyone who hasn't walked the hills in Wales to give it a go. One of my favourite days was along the Glyndwr's Way just out of Machynlleth. The views were 360 degrees and just amazing! Hills, sheep, and wild horses! What more could someone want? Then the fighter jets flew by.. so close you could see the pilots smile and wave! and the whoosh sound as they went by...felt right in the chest! unbelievable!o.k. more for the post.. Day 3 to come. And I'll post more pics of Day 1-2.

03/10/09 02:07:22AM @ceri-shaw:
It comes as something of a revelation though to hear about people running around naked. That was not a common sight in days of yore.