This was the thing that brought us to Hay, an invitation to come to the New Welsh Writing Awards shortlist announcement ceremony, put on by the literary magazine, the New Welsh Review.  Below is their press release,with details on the event.  There are also links to read the stories and to vote for the winning story, any reader can vote - 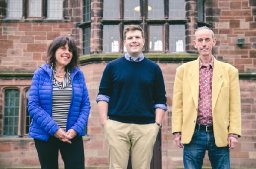 Two professional writers, John Harrison and Mandy Sutter and PhD student Nathan Llywelyn Munday are now in the running for the top prize, which will be announced at a ceremony at the Royal Welsh College of Music and Drama in Cardiff on 7 July 2016.

The Prize celebrates the best short form travel writing (5,000-30,000 words) from emerging and established writers based in the UK and Ireland plus those who have been educated in Wales. The judges are New Welsh Review editor Gwen Davies and award winning travel writer Rory MacLean.

First prize is £1,000 cash, e-publication by New Welsh Review on their New Welsh Rarebyte imprint in 2016 and a positive critique by leading literary agent Cathryn Summerhayes at WME. Second prize is a weeklong residential course in 2016 of the winner’s choice at Tŷ Newydd Writing Centre in Gwynedd, north Wales. Third prize is a weekend stay at Gladstone’s Library in Flintshire, north Wales. All three winners will also receive a one-year subscription to the magazine.

The shortlist comprises two books and a long-form essay in uplifting prose set in Europe, Africa and South America. In Mandy Sutter’s ‘Bush Meat: As My Mother Told Me’, a Nigerian domestic scene unfolds, where subtle and interdependent racial and class issues are seething under a tight lid. John Harrison’s book tracks the rise and fall of the pre-Columbian city of Tiwanaku in Bolivia, highest city in the ancient world and the hub of a trading empire stretching from Chile to Peru. And European creation myths are the theme in Nathan Llywelyn Munday’s map of the highs and lows of the grand narrative as he treks with his father through the Pyrenees.

The standard this year was once again so high that a further three, highly commended entries were awarded, which will all be published in extract form in the autumn edition of New Welsh Reader (112), New Welsh Review’s creative magazine, publishing on 1 September. Entrants will receive a standard fee of £170 for publication. These highly commended pieces, two long-form essays and a prose book, range from a Trans-Siberian train voyage, through explorations of home, exile and return in Ghana and Liberia, and a love story to underground springs of Mayan culture in tourist-riven Yucatan.

Shortlist Showcase with Interviews, Readings and Animation, produced by Emily Roberts in partnership with Aberystwyth University: https://vimeo.com/168098992 (this will go live at 4pm on 1 June).

Last year’s winner, Eluned Gramich, whose essay Woman Who Brings the Rain: A Memoir of Hokkaido, Japan has just been shortlisted for the Wales Book of the Year 2016: The Open University in Wales Creative Non-Fiction Award. Her essay is available as a Kindle ebook (£2.99) and in print in shops throughout Wales and via gwales.com (£7.99).

New Welsh Review also announced the Best Travel Book Poll shortlist at the event. The shortlist of three titles was voted for by the public from an original longlist of 20 titles selected by co-judges Gwen Davies and Rory MacLean with nominations from the students of the University of South Wales and librarians across Wales.

Wildwood: A Journey through Trees by Roger Deakin (Penguin)

A Time of Gifts by Patrick Leigh Fermor (John Murray)

The public will now be able to vote for the winner, which will be revealed on 7 July. For more information visit http://www.newwelshwritingawards.com/best-travel-book-poll/

For images, more details on the Prize, Travel Book Poll and for interview requests please contact Megan Farr on marketing@newwelshreview.com or 07912149249