Bodedern is nearly at the end of Ynys Mon (Anglesey) – not far from Holyhead and the ferries to another shore. This is where the Welsh National Eisteddfod is going to be this year. The Welsh National Eisteddfod is a festival of Welsh language and culture. Now, it is only a few days before the pomp begins, and the Gorsedd of the Bards don their robes for the crowning and the chairing of the bards. The small two lane roads are all a bustle with construction and road crews hoping to complete their work before the weekend and the Gorsedd strike. The maes (field) for the event is just out of town, before you reach the little one shop and a post-office village. But as for me, I am hanging out with the rebel crew in a barn on a dairy farm.

Cymdeithas yr Iaith (Society for the Language) once ran Maes B – the youth field. Maes B is where the Eisteddfod sends the kids for their rock n’ roll. In a squeaky clean poetry and classical music event with white robed “druids” awarding medals and crowns and chairs, Maes B is a coming of age party for Welsh language youth sneaking in pints and who knows what else. But, back in the early part of the century (the century we now live in) Cymdeithas yr Iaith lost their spot running the gigs to corporate interest and hopes of raising funds for the Eisteddfod. So, the rebels that they are, they have been running an affordable fringe concert event ever since. As is usually the case, my friends are part of the rebel alliance. Of course, its really not as dramatic as I am making it sound. The Gorsedd do not wear the white of Storm Troopers. But then again, we are setting up our week-long set of gigs in the village – on Ieuan’s dairy farm, inside the barn, and that’s where you can find me.

I have been pounding stakes into the field to map out parking and camping locations. I have climbed ladders to set pigeon spikes on the rafters of the barn, so that Bryn Fon and Meinir Gwilym don’t get pooped on while performing. I’ve been shoveling gravel to fill holes in the drive, and setting up multiple levels of safety fencing, because the cows need protection from the concert goers, and someone perchance might climb over brambles and fences to fancy a drunken swim in the slurry pond. But, all this work is the easy part. The challenge of week for me is doing it in Welsh. I am not succeeding well at this task.

The accents in the North of Wales befuddle me. Sometimes I can’t tell the difference between Welsh and English when these accents are added to a discussion. All the work is being done in Welsh this week, and I am able to catch about 70% of any conversation. Unfortunately, the other 30% is usually the critical part that defines the parameters of the dialogue. It all feels like being on a train, and trying to listen to the train conductor as the train nears the next station. Train conductors are taught to speak clearly until the pertinent info arrives:

“Mind the gap between the train and the platform. Our next stop ibsn Frnkl@#34kjbqwcz.”

This is how my brain is processing information in Welsh this week. It comes to me something like this, “We still need to i9uerig%$jvbc in the field, and niuyqg&@#swx87ubwec.”

Americanwr Twp ydwi. But at least I’m giving it a college try out in the rebel alliance fferm in Bodedern. 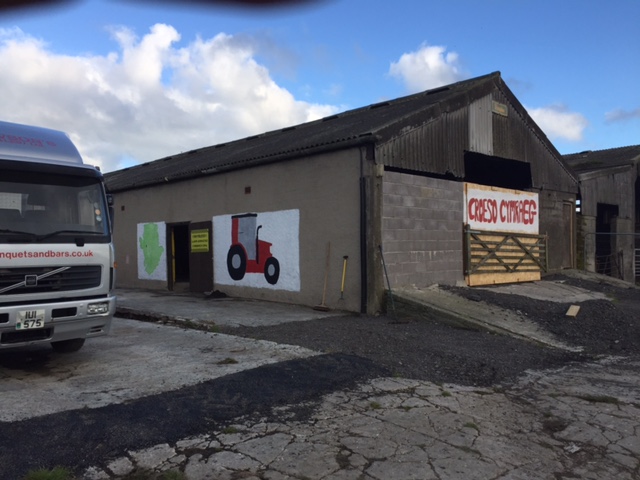